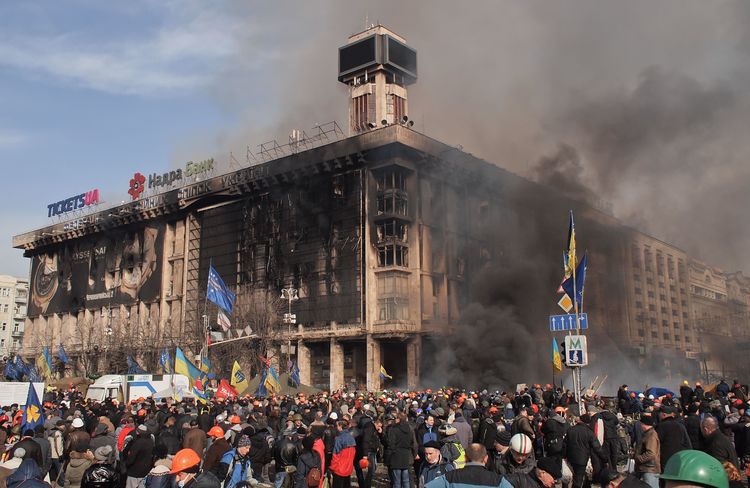 I am a Ukrainian-descended American software developer, based for the last two years here in Lviv, in western Ukraine, about 300 miles from the capital, Kyiv, where the worst of the recent civil unrest has taken place.

My lead developer travels to Kyiv every time violence flares up. He, like many Ukrainians, considered it his duty. Two days ago, when the latest and most intense fighting flared up, I texted him: “Should I wish you a safe journey?” He texted me back: “You’re late. I’m already on Maidan.”

I pay him well, though he could probably earn even more elsewhere. His enthusiasm for Bitcoin keeps him with me. (I’m particularly interested in Bitcoin—see here and here).

He’s part of Ukraine’s miniscule middle class. He owns an SUV and a three-story home where he lives with his wife and two children. We go skiing together. He is not the type of person who’d be motivate by the thirty Euros a day which Paul Craig Roberts (alas!) claims was sustaining the protests. [US and EU Are Paying Ukrainian Rioters and Protesters,  February 17, 2014]

Nor was Yuriy Verbytsky, a seismologist from the Geophysical Institute in Lviv and mountain climber who, after being injured in the protests and hospitalized, was kidnapped from the hospital, severely beaten, and left in the woods where he froze to death. Nor was Bohdan Solchanyk, a university lecturer killed on February 20th.

Chances are that the protesters in the streets will allow the opposition politicians to speak for them, though they've scorned them in the past. (But there are also reports that the protestors are resisting, and even a rumor that Yanukovych has fled to his power base in the Eastern and proclaimed a separate state).

Personally, I believe the best thing for Ukrainians would be a dismantling of the hyper-centralized, corrupt, ineffective government bureaucracies and the development of local or private solutions. (I am skeptical of the European Union, which I don’t think Ukraine needs, and regret so many Ukrainian nationalists have persuaded themselves that it offers protection against Russia). But both sets of politicians contending for influence want the bureaucracy to remain intact so that they can simply affect the leader.

In this regard, the peace deal could be a lost opportunity. But, on the positive side, the people have shown their strength. The fact that they were able to overthrow a corrupt government will be a restraint on all future regimes and, because of Ukraine’s vertical power structures, there’s going to be a lot of change.

There seems to be unusual awareness in the US Main Stream Media that Ukraine has deep demographic divisions and that the Russian-speaking Donbas in the East, and possibly the Crimea, could secede. (Unusual because the American Establishment and MSM has a bias against secession at home and abroad—remember George Bush’s notorious 1991  “Chicken Kiev” speech urging Ukraine not to leave the Soviet Union).

This map (click to enlarge) is from Is It Time for Ukraine to Split Up?, by Brian Whitmore, theatlantic.com, February 20, 2014. It’s an interview with Rutgers University’s Professor Alexander Motyl, concluding that, while Ukraine probably won’t split up, Western Ukraine—overwhelmingly Ukrainian-speaking—would be better off if it did. I agree—it’s a good and insightful analysis.

Note that this map includes Ukrainian- and Russian-speakers—and also ethnic Ukrainians who speak Russian. This may be a hard concept to grasp. It was strange for me. As the child of Western Ukrainian exiles—my mother’s family fled when the area was seized by the Soviet Union after World War II and a Jewish neighbor warned them of an imminent Communist  purge—I had the typical Western Ukrainian prejudice that Russian speakers are the enemy, and everything east of Borispol Airport had been lost to the Muscovites. But after all, many Irish nationalists speak only English.

It’s another reason I would steer readers away from one common misconception—this hasn't been a simple struggle between “Ukrainians” and “Russians”. It's a struggle between Ukrainians and their corrupt government with a mixture of sympathy, apathy and skepticism from the Russian parts of Ukraine.

(In one recent amusing incident, Russian television abruptly cut off an interview with a Russian-speaking Crimean politician when he downplayed the protests but started to say Yanukovych’s Party of Regions government had stolen prime real estate in the Black Sea resort province and were simply afraid of retribution.)

I consider myself a libertarian. (Click here to see me speaking at Hans-Herman Hoppe’s Property And Freedom Society conference on June 3, 2011). But in the last two months, I have become painfully aware of the gap between reality and the perception of American libertarian and conservative writers, no doubt reacting out of years spent attempting to limit the power of their own US government. The embarrassing fact is that some MSM reporting has been better.

The enemy of your enemy is not (necessarily) your friend. Ayn Rand’s very reasonable hatred of the Soviet Union led her to make ridiculous claims, like the United States being the “only moral country in the history of the world.” I feel a similar bias has afflicted much of the Alternative media for whom I felt so grateful until just recently.

After Snowden and Syria, Vladimir Putin’s credibility reached a high water mark (which perhaps receded only slightly when Russia become the only country in the world to outlaw Bitcoin). I think many conservatives remain inspired by the Russian President’s embracing Christian identity and declarations of family values. From the comfort of the West, they assume Russia to be a place with Western-style property rights and rule of law—plus a leader championing neglected conservative causes.

But Russia as a symbol in the West is very different from Russia up close and personal. What these commentators, like Pat Buchanan who authored Is Putin One Of Us?, fail to realize is that, in Russia and its satellites, people have a leader who offers conservative rhetoric in exchange for property rights and rule of law.

Paul Craig Roberts describes the protesters as “pawns” who would “place their country in the hands of the IMF so that it can be looted like Latvia.” [Is Ukraine Drifting Toward Civil War And Great Power Confrontation? February 20, 2014.]

Does Roberts not realize how dramatically higher the standard of living is in Latvia than in Ukraine? Compare any post-Soviet EU nation (Estonia, Latvia, Lithuania), to any post-Soviet non-EU nation (Ukraine, Belarus) and the story is the same. (Remember, I speak here as a critic of Ukraine's joining the EU).

I have no illusions that some protesters weren’t getting paid and that Western intelligence agencies aren’t trying to affect the outcome of this civil unrest. (In fact, late Friday there were reports that Israelis had been among the protestors. Arguably, weakening Russia, which has discouraged the US from war in Syria, is an Israeli foreign policy objective.)

(While we’re on the subject, I hated the suspiciously slick “I Am A Ukrainian” viral video, because I think Ukrainians should finding their own solutions rather than appealing for outside help, and I wonder what its creator, the American filmmaker Ben Moses, was doing in Kyiv.

The Viral Heroine Of The Maidan, by Deborah Stambler, The Daily Beast, February 21, 2012).

But outside influences aren’t the driving force. They aren’t “orchestrated” by the west as American-German freelance journalist William Engdahl suggests (US NGO Uncovered in Ukraine Protests, January 7, 2014). Rather, elements in the west are trying to co-opt and direct a homegrown, and genuine ethno-nationalist, protest.

Significantly, opposition candidates favored by the West have no standing with the protesters. The least mistrusted opposition figure, former heavyweight boxing champion Vitali Klitchko, was sprayed in the face with a fire extinguisher when he attempted to speak to them. Oleg Tyagnibok, leader of Ukraine’s most nationalist political party, has zero standing with the protesters. Yet Daniel McAdams deems the protesters as guilty by association, although Tyagnibok has repeatedly cited Israel as a model of nationalism for Ukraine to follow.(Why Does Ukraine Seem So Much Like Syria?, LewRockwell.com, February 20, 2014),

For seventy years, opponents of the Kremlin have faced accusations of Nazism. Even the Katyn massacre of Polish military officers was blamed on Nazis.

Yes, your criticism of US involvement in Ukraine is sound. I agree. But that doesn’t mean there isn’t also propaganda and lies from the other side. The titushky—usually Russian-speaking hooligans from eastern Ukraine—don’t hide the fact that they’re also paid for their dirty work. Here is a video of them discussing their pay. Here is a video of them beating protesters.

Yes, criticize anti-Russian propaganda in the American press, but also criticize ridiculous Russian propaganda, which, for the first month of protests claimed they were inspired by a mental condition prevalent during the onset of cold weather . [Russia: Forecaster blames Ukraine protests on chilly weather, December5, 2013).

And consider this historical context: after WWII ended, while Stalin, enjoyed explicit support from his US allies, armed resistance to the Soviet Union in Ukraine lasted another 10 years. It wasn’t until 1955 that armed resistance to arguably the most brutal tyranny ever known was finally extinguished.

Now the inheritors of that legacy are resisting what they perceive as the kleptocracy descended from the Soviet Union which is empowered by a former KGB agent-turned President of Russia.

Ukraine is a culture seeking legitimacy through statehood. Russia, by contrast, is a state seeking legitimacy through culture—an overextended empire that even after the collapse of the USSR still contains too many heterogeneous elements. Moscow simultaneously decries Muslim migration into the city, yet wages war to prevent historically Muslim provinces from seceding.

Demographic trends are not on the side of Russia’s Indo-European Christian majority, any more than demographic trends favor the historic American nation. (But at least Russia inherited its problems—in the U.S., they are the result of government policy).

I agree with Ron Paul. America should stay out of Ukraine. But by staying out, I would include not uncritically parroting Kremlin propaganda.

Roman Skaskiw (email him) is an American of Ukrainian ancestry. He writes and develops software in the western Ukrainian city of Lviv, where he also teaches Brazilian Jiu Jitsu. His blog is Roman In Ukraine.