The Empire Strikes Back: The MSM’s 3-Point Plan To Recapture The Narrative 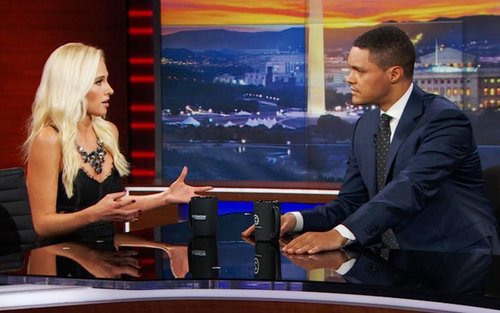 THE BLAZE TV host Tomi Lahren’s November 30  appearance on The Daily Show seemed like a flashback from a previous era. As in snarky liberalism’s golden days under Jon Stewart, the host, now Affirmative Action comedian Trevor Noah, attacked Lahren’s “I don’t see color, Democrats are the real racists”-style talking points. Noah batted aside these Beltway Right platitudes, Leftists rejoiced, and the clips were eagerly passed around by smug SWPLs.  [Trevor Noah Expertly Skewers Conservative Tomi Lahren, by David Moye, Huffington Post, December 1, 2016] But in 2016 conservatives and nationalists triumphed because they stopped playing by the enemy’s rules, accepting the enemy’s frame, and conceding the legitimacy of the enemy’s platforms. And the enemy, above all: the Main Stream Media.

Lahren, a protégé of #NeverTrumper Glenn Beck, apparently didn’t get this memo. And she was savaged for it.

Some perspective: For most of human history, power was rooted in possession of land. After the Industrial Revolution, power lay in controlling in the means of production. But today, the main source of power is control of information.

Having the power to control information (what Steve Sailer calls The Megaphone) gives you the ability to determine what issues will be discussed, what viewpoints are considered legitimate, and who is allowed to participate in polite society. It ultimately allows you to push an entire code of morality on others. And morality is, ultimately, a weapon more terrible than can be found in any arsenal [Weaponized Morality, by Gregory Hood, Radix, October 12, 2016].

The 2016 election was ultimately a battle between the commanding heights of media (newspapers, networks, and web portals) and what we could call the guerillas of media (/pol, forums, hackers, right wing trolls, and independent media outlets like us). The latter lacked power on their own, but they united behind Donald Trump, a man whose brand was so well-established that the Establishment couldn’t ignore him. It was Fourth Generation Warfare—this time over information.

And just as guerillas have been frustrating established armies all around the world on real-world battlefields, so did the online commandos frustrate and eventually overcome the seemingly invincible Fourth Estate.

But this victory wasn’t inevitable. From day one, the MSM tried to destroy Donald Trump, including his business empire, because of his stated views on immigration.

Since that failed, they have started turning on his supporters with three tactics.

Soon after the election, the Leftist Think Progress blog announced that the Alt Right should only be called “white nationalist” or “white supremacist”. [Think Progress will no longer describe racists as “alt-right”, November 22, 2016] The AP dutifully echoed this pronouncement days later, warning journalists not to use the term and instead to stick to pejoratives. [AP issues guidelines for using the term ‘alt-right,’ by Brent Griffiths, Politico, November 28, 2016]

This is an Orwellian attempt to literally eliminate Crimethink through linguistic control. Of course, no such guidelines will apply to non-white Identitarian groups such as the National Council of La Raza, which will continue to be called an “advocacy” or “progressive grass-roots immigration-reform organization” [NCLR head: Obama ‘deporter-in-chief,’

Needless to say, most of the rationale for this is not just fake, but comically, obviously, wrong. Thus the Washington Post reported that VDARE.com (and many other sites) was a “Russian propaganda effort” based on no evidence at all. We ask: where is our vodka?

Rolling Stone, which pushed one of the most disgusting hoaxes in modern journalism at the University of Virginia, is having meetings with President Obama to discuss “fake news.” The Guardian fell for what appears to be a hoax decrying “online hate” precisely because it is impossible to tell the difference today between the latest virtue signaling craze and satire. 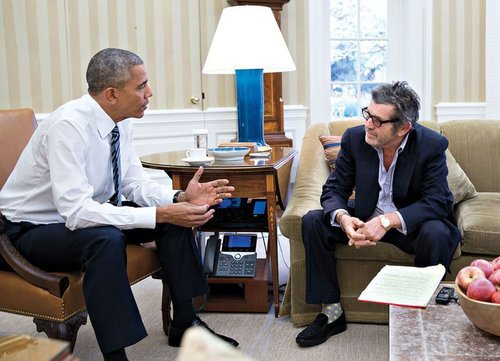 But algorithms are already being introduced to distinguish between “verified” and “non-verified” news sources. It can be assumed only Leftist sites will receive verification on social media. [Fake news on Facebook is a real problem. These college students came up with a fix in 36 hours, By Colby Itkowitz, Washington Post, November 18, 2016]

There is “fake news” and it is annoying, to be sure. There were plenty of cringey stories about non-existent celebrity endorsements of Trump in the last cycle. But most “verified” or “mainstream” sources today don’t actually report but simply “point and sputter” or actually conceal real news. For example, even after the journalists got what they wanted out of the latest NPI conference, the MSM still couldn’t restrain themselves from simply making things out of whole cloth.

Actual attacks on Trump supporters are not covered, while unsourced, unverified claims of a wave of “hate crimes,” which mostly consist of handwritten notes most likely written by the supposed “victims” or incidents so trivial normal people wouldn’t even notice, dominate the headlines.

This is a far more insidious form of “fake news” than anything “the Russians” are promoting. And what about the lie of “hands up, don’t shoot?”

Another example: supposedly mainstream outlets are comfortable leveling wild charges that Steve Bannon is somehow a “white nationalist.” Bannon on the evidence is actually a civic nationalist who has specifically denounced racism and, if anything, is showing troubling signs of moving towards the “DemsRRealRacist”-style talking points which led Conservatism Inc. to disaster. There are absolutely no statements by Bannon actually calling for, say, a white ethnostate.

In contrast, Rep. Keith Ellison, candidate to head the DNC, actually has called for a black ethnostate. [Keith Ellison once proposed making a separate country for blacks, by Justin Caruso, Daily Caller, November 26, 2016]. However, this has not prevented him from being “normalized” and celebrated by the “mainstream” media.

The logical conclusion of all of this:

Or, as VDARE.com Editor Peter Brimelow told the NPI conference: “What we are going to see in the next few years is an intensified Reign Of Terror.”

For example,  Buzzfeed’s latest masterpiece of journalism: the shocking revelation that reality stars Chip and Joanna Gaines attend a church that disagrees with homosexual marriage [Chip and Joanna Gaines’ Church Is Firmly Against Same-Sex Marriage, by Kate Aurthur, Buzzfeed, November 29, 2016]. You know—like every Christian church for about 2000 years. The obvious agenda: to get the show canceled or the Gaines to disavow their own pastor.

This is the goal of most “journalism” today—to get someone fired or to get someone to disavow someone. The Southern Poverty Law Center ($PLC to VDARE.com) makes a lucrative income from policing speech.  ( Right, a graph of their endowment fund.)And journalists today are no different than the $PLC. They do not report, they do not provide information, and rather than ensuring freedom they are the willing tools of repression.

And this repression only goes one way.

If you wouldn’t invite some communist demonstrator into your meeting, why would you invite an MSM journalist? They have the same beliefs, the same motivations, and increasingly, they rely on the same tactics. Aside from the occasional throwing of feces (as Richard Spencer learned at NPI), the preferred tactic of “Antifa” consists of pearl-clutching blog posts.

The repression is accelerating. Reddit is now moving to censor pro-Trump content on its site [Breaking: Unethical @reddit CEO vows to crack down on “toxic users” as right wing subreddit protests censorship, by Charles Johnson, Got News, November 30, 2016]. Having been purged from Twitter, many free speech supporters are moving to GAB, so The New York Times is trying to get that shut down too [The Far Right Has a New Digital Safe Space, by Amanda Hess, November 30, 2016]. And Kellogg pulled its ads from Breitbart, after Trump’s election, because it said it did not “align with its values as a company”. [Breitbart at ‘war’ with Kellogg’s over advertising snub, BBC, December 1, 2016].

Since the election, journalists have been paying tribute to their own courage, promising to hold Trump accountable. But there is no greater enemy to free speech than reporters. Shutting down the networks and shuttering the newspapers would be a boon to independence of thought, not an obstacle.

For his own sake, to defend his own Administration, Trump has to delegitimize the MSM, just as he did during the campaign. He should continue to use his Twitter account and speak straight to the people. He should not hold press conferences with national MSM and speak only to local reporters before holding rallies. If Twitter bans him, as Leftists are urging, he should nationalize it as a utility and make it a free speech zone.[Twitter has become a utility, by Alan Kohler, The Australian, October 17, 2016]

And Trump’s supporters need to act the same way. Stop giving reporters access. Stop pretending you can play the MSM for your own benefit. Stop acting like these people are anything other than hostile political activists whose only interest in life is to make yours worse.

Stop giving them what they want.

Your career, family, and entire life may depend on it. And so does the life of the nation.