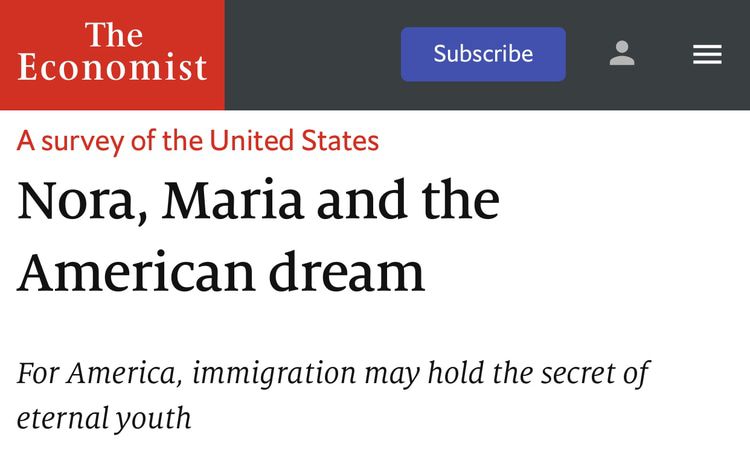 The Economist Magazine on Immigration

I wasn't very hopeful about the London Economist's "Editorial Survey on America and Immigration" when I read the flyer being circulated to potential advertisers. (In the current climate, immigration enthusiasts never think of hiding their crass motivations.) And in fact the survey can't compare with the Copley News Service's Special Report "America's Immigration Dilemma" last year, with its sophisticated but searing account of the marginal lives of many recent immigrants. (Correct link thanks to ProjectUSA's Brenda Walker.)

Still, the Economist's effort (just out in the March 11-17 issue - ) isn't totally awful. There's the Economist's trademark smug condescension. There's a steady rain of immigration enthusiast clichés: the Cato Institute's Steve Moore is even taken seriously when he makes his timeworn claim that immigrants are a "self-selected elite." (Because they've uprooted themselves.  Of course, it's equally true that, while some immigrants may be enterprising, others may just be chronic misfits and drifters. Hence immigrants historically have been over-represented in poverty and in prisons.  The Economist investigates neither issue).  But there's also, maybe because of the naiveté of the reporter, John Mickelthwait, quite enough evidence in the Economist survey to make it clear that immigration has become a disaster.

For example, the Economist's final image is of "Nora," described as an

"undocumented [sic—the p.c. term for illegal] 42-year-old Mexican who has been in the country for 12 years. She lives in a caravan trailer with her husband and four children, two of whom are American citizens. [i.e. born in the U.S. and therefore citizens under the current interpretation of the 14th Amendment].  The family finances are tight. Her husband brings in $200 a month, working as a bricklayer across the border in Matamoros. She gets $200 in food stamps and $90 from Aid to Families with Dependent Children…"

Nora, Maria and the American dream

Plainly, this is a social catastrophe in the making—financed to an extraordinary extent, the Economist reveals, by the unfortunate American taxpayer.  And there is more to come. When asked why she refuses to go home, "Nora" points to a picture of a daughter holding a high school graduation certificate.

This makes the Economist go all squishy. But what it actually represents is another raid on the American taxpayer. Annual per pupil spending in Texas public schools averages over $5,000.

In the modern U.S., transfer payments are far more extensive than just "welfare." These transfer payments do indeed constitute a powerful incentive for immigrants to stay - unlike the situation during the first Great Wave a century ago, when up to 40 per cent of immigrants ultimately went back home.  Which is why the Cato/ Wall Street Journal editorial page formulation ("immigration yes, welfare no") is so fatuous.  It should really be "and free education / emergency room health care etc. etc. no." Yeah, right.

Typically, the Economist heads this story "For America, immigration may hold the secret of eternal youth."  Eternal aid for dependent children, anyway.

The Economist's realism about the economics of immigration principally stems from having at least heard of the National Academy of Science's 1997 study The New Americans, which aimed to summarize the consensus among labor economists. The Economist describes the NAS finding that the net aggregate macroeconomic benefit to the native-born was "around $10 billion" (actually $1-$10 billion) as "quite a modest sum when set against an $8 trillion economy."  This is probably not British understatement but innumeracy.  A benefit of 0.1% can only be described as nugatory—and the NAS finding as devastating for current policy and its supporters.

More devastating, in fact, than the Economist apparently realizes.  The NAS study elsewhere found that the fiscal costs of the immigrant presence more than wiped out any macroeconomic gain. America is not merely being transformed for nothing—it is paying for the privilege.  But, hey, none of these figures have ever been reported in the Wall Street Journal at all. One cheer, at least, for the Economist.

Again, the Economist does report the NAS finding that immigration costs every native-born family in California $1200 extra in taxes per year. Admittedly, it flubs up the analysis, arguing "the methodology is flawed" because tax-paying immigrant children will moderate this loss eventually (but the NAS was reporting on a specific year) and citing UC-Berkeley economist Ronald Lee's much-touted estimate that immigrants are worth an average $80,000 net in taxes over their lifetimes (but this assumed a massive tax increase to bail out Social Security—otherwise they're still a net loss.)  Still, that amazing California cost is there, in print. Revolutions have started over less.

The Economist survey is also helpful, again inadvertently, in suggesting why the NAS report has not started a revolution—yet. It leans heavily on the sinister figure of RAND Corporation economist James P. Smith, who in his role as chairman of the NAS study oversaw the single most misleading press release I've ever seen in nearly thirty years of professional journalism.  It is entirely because of this press release (with a little help from the idleness, stupidity and bias of the media—but what else is new?) that even opponents of immigration policy think the NAS found massive economic gains from immigration, whereas in fact it found the exact opposite. Dr Smith has recently produced Pollyannaish figures, not yet available to colleagues, that allegedly show that the established decline in relative education levels among immigrants has halted—achieved, apparently, by the trick of not counting the backlog of Green card applicants, many of them known to be illegal immigrants already here.

The Economist features this revealing quote from Smith: "Yes, one-third of my country will claim Asian or Hispanic roots by 2050 [i.e. bear no relation to the historic American nation]. But most of that one-third will also be something else [i.e. the ethnic situation will be even more confused]. And our kids will live in that world. We will not." [Italics added].