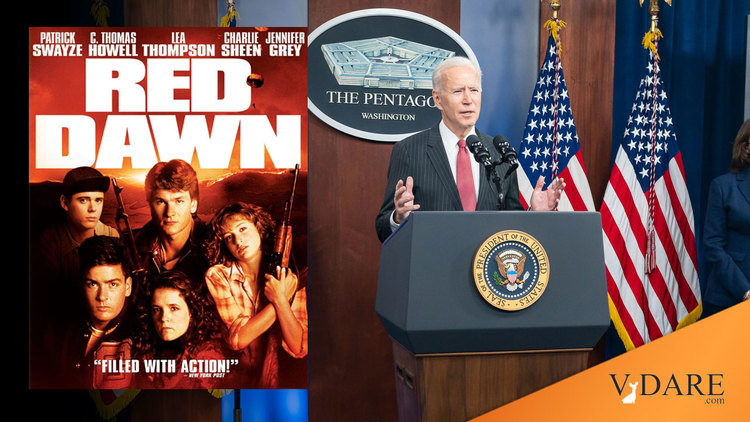 The Democrats’ RED DAWN: Yes, It’s A Communist Coup. But There Are Signs Of Hope

Remember John Milius’ 1984 classic movie, Red Dawn, in which Soviet and Cuban shock troops capture the town of Calumet CO? In one particularly compelling scene, the victorious occupiers execute Americans accused of conspiring with high school rebels who have been waging guerrilla warfare. But just before the Reds open fire, the condemned patriots start singing America the Beautiful.

I thought of that when reading Julie Kelly’s account of the January 6 Mostly Peaceful Protesters, still scandalously held in solitary confinement for their political opinions, singing the National Anthem every evening [January 6 Detainees Sing the National Anthem, July 18, 2021] Except this time, the enemy isn’t the Soviets: it’s Joe Biden and his—let’s face it—de facto Communist regime.

These political prisoners’ “Days In Court” will be Stalinist show trials, designed to signal that opponents are “terrorists” and to make clear what the Regime has in mind for the Historic American Nation: legal and political harassment, then dispossession and, ultimately, Replacement. In the eyes of many Democrat officials and Leftist pundits, the so-called attack on the U.S. Capitol was “worse than 9/11” [Republican Party is now a terrorist organization — and none of this is a surprise, by Chauncey Devega, Salon, February 16, 2021].

But there are signs of hope.

In a little-noted development, the families of 9/11 victims came out swinging:

When retired New York Deputy Fire Chief Jim Riches speaks about it, the anger and sadness in his voice is unmistakable...

Riches and other family members of victims told Fox News they're disgusted when they hear of the two events even being compared, let alone suggesting the riot, while stunning and disgraceful, was the darker day.

“It’s a shame,” he said. “Are they kidding me? 3,000 people died, plus we have more people dying from the air that was down there. … They’re comparing it to score points politically. The families are really [angry]. When I talk to them, when they compare it to that, they find that outrageous.”

Maybe something remains of what truly unified Americans 20 years ago, when Saudi Muslim radicals—who shouldn’t have been in the country anyway—murdered 3,000 of our countrymen:

Unfortunately, rank-and-file Democrats seem be gulled their leaders. A poll from Echelon Insights in February reported the top concerns for Democrat voters:

In contrast, Republicans said their top concerns are illegal immigration (81 percent) then lack of support for the police, and high taxes.

Not one issue among voters of the two parties overlaps. The two sides live in different worlds—what VDARE.com has called “America” and “Anti-America.”

The question we must ask is this: At what point do we realize a coup of unimaginable proportions has occurred, and our fate might be that of the Americans in Milius’ Red Dawn?

(Extreme? Look what happed to Ashli Babbit—and her killer hasn’t even been named, let alone charged).

Consider the swiftness with which an otherwise unknown song, Lift Every Voice and Sing, has virtually supplanted the National Anthem at sporting events. Only a few weeks after Juneteenth, the latest blood libel against White America, was declared a federal holiday, Vanessa Williams sang the so-called Black National Anthem at PBS’s “A Capitol Fourth” event [Vanessa Williams and PBS slammed for 'Black national anthem' performance, by Lisa Respers France, CNN, July 5, 2021]

Back at the start of the 2020 NFL season, all Week One games featured a rendition before the National Anthem [The NFL plans to play the Black national anthem before Week 1 games, Jabari Jackson and Jill Martin, CNN, July 3, 2020]. But at least it was just for week one. In 2021, it will be performed before every game:

The NFL will play the Black national anthem before all games … as part of a 10-year, $250 million commitment to fighting racism in America. ...

Additionally, the league announced it will feature social justice messaging on fields, signage and helmet decals and public service announcements, according to a report by Front Office Sports.

Of course, the song will be performed before the Star-Spangled Banner.

The Journal-Constitution’s Lee noted that the NFL acted because of the Floyd Hoax, and that “some of the biggest and most influential names in corporate America, including NFL Commissioner Roger Goodell, have fully embraced the Black Lives Matter movement and continue to express an urgent commitment to ending systemic racism.”

It would seem that the NFL and Corporate America have much the same view as Democrat voters: The top threats to America are Donald Trump’s supporters, “white nationalism” and “systemic racism.”

One wonders if we’ll hear Lift Every Voice and Sing before The Star-Spangled Banner on the 20th anniversary commemoration of 9/11!

But another sign of hope: Despite the fact that much of the country was still locked down with nowhere to go because of the COVID-19 restrictions, NFL TV ratings collapsed a staggering seven percent in 2020 [NFL drops the ball as TV ratings take hit over ‘woke-ism’, by Charles Gasparino, New York Post, December 26, 2020]. It turns out having Social Justice messages of “Black Lives Matter” and “End Racism” written in the end zones of NFL stadiums doesn’t translate to viewership.

This is trend that has continued since 2017, when kneeling during the National Anthem and the antics of Colin Kaepernick cratered in-person attendance at NFL games [Backlash: Week 6 of the NFL reveals several nearly empty stadiums as fans continue to leave the league, by Dylan Gwinn, Breitbart, October 16, 2017]

So we can fight back: Turn off the NFL, and embrace family, friends and neighbors who don’t think you’re an enemy because you support Donald Trump.

And don’t be afraid to hum America the Beautiful in front of our new rulers.

Jack Dalton [Email him] is a recovering conservative.