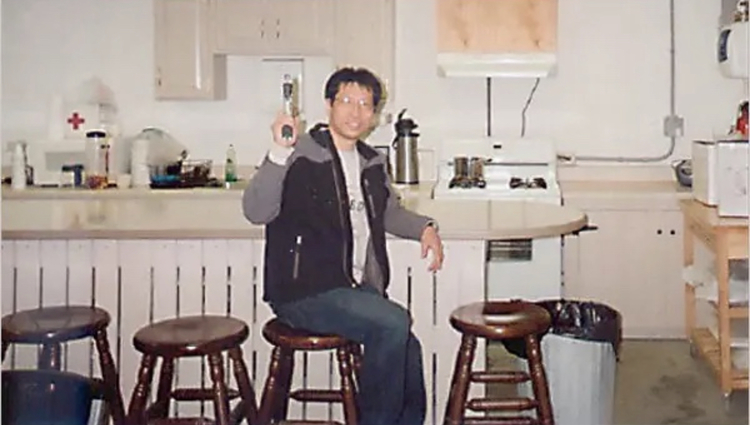 Peter Brimelow writes: If the killer in the Binghamton immigration center massacre had been a white American, I have no doubt that much of the VDARE.COM Editorial Collective would be in police custody right now. After all, the Treason Lobby has gotten its anti-Hispanic "Hate Crime" hysteria on to the national agenda with no significant evidence at all.  The truth, deliberately unmentioned in the Main Stream Media headlines, is that the killer was an immigrant and that this happens sufficiently often to constitute a trend, which we have called "Immigrant Mass Murder Syndrome". Brenda Walker wrote our first full-length account of Immigrant Mass Murder Syndrome after the 2007 Virginia Tech killings, also committed by an Asian immigrant, and we have been following it ever since. Only on VDARE.COM!

Psychology informs us that even positive change can be highly stressful. Leaving home to attend college, for example, is simultaneously exhilarating and frightening. The first job, marriage and having a child are welcomed signposts of maturity, while they produce anxiety regarding the associated life changes.

In a similar way, immigrating to a completely foreign culture is a vastly more disorienting experience, where the possibility for failure is real and life-affecting. Remarkably, many foreigners come to this country with no knowledge of English or understanding of how the society works, yet expect to find jobs, navigate a complex modern culture and somehow achieve the American Dream of deluxe home, trophy children and other bragging rights to impress the homies.

Some immigrants regret their choice, and either return to their home country or wish they could. Mexicans and others nearby can easily scoot back, and some do when the economic weather clouds up.

It's a tough slog, even in a good economy, and we are far from prosperity these days. Immigrants can feel more on the edge when money is harder to acquire. They may have unrealistically fantasized a brilliant success, but are barely making ends meet. Frustration and anger can result when a personal Gold Mountain does not materialize.

Yet when a horrific immigrant mass murder episode occurs, the wrenching stresses created by multicultural immigration are never considered by the Main Stream Media or Washington legislators as a major cause. In fact, every other reason on earth is dragged out—particularly when the political agenda is to blame America, its people and the Second Amendment.

There has been plenty of blood spilled by unhappy immigrants, including the 2007 Virginia Tech massacre (the "worst in US history"), where Korea-born Seung-Hui Cho killed 32 and wounded 25 others. Although psychologically disturbed and menacing, he was treated with kid gloves by university personnel despite stalking co-eds and other physically threatening behavior.

It's doubtful that an American student would have been allowed to get away with so much. But immigrants have access to an array of lawyers and ethnic interest groups happy to defend their rights, no matter how questionable, against the common good. Had Virginia Tech, possibly fearful of lawsuits and accusations of racism, been less politically correct and more responsible, it's possible a bloodbath might have been averted.

At this writing, what's known about Jiverly Wong (aka Voong) paints a picture of an understriving malcontent. He resided here for 28 years, but spoke English so poorly that it negatively affected his ability to move up the employment ladder. He worked for caterer Kikka Sushi in Los Angeles for seven years with no problems until one day he didn't show up.

"Back in New York, he worked at the Shop-Vac plant in Binghamton. Former co-worker Kevin Greene told the Daily News of New York that Wong once said, in answer to whether he liked the New York Yankees, 'No, I don't like that team. I don't like America. America sucks.'" [As NY gunman's life unraveled, he took others', AP, April 4, 2009]

He lost that job, complained that he received only $200/week in unemployment benefits and bemoaned his bad luck. The town Police Chief said, "He felt degraded because people were apparently making fun of his poor English speaking."

Did the alleged slight occur on the job? Blue-collar factory workers are not known for their emotional sensitivity. The "degradation" could have been the usual shop banter that occurs normally.

Or did he feel disrespected by other immigrants? It's hard to imagine ESL classmates teasing him about English when they were in the same boat. However, the victims had multiple gunshot wounds, so perhaps he was angry at his fellow immigrants. He had attended the center until a month ago, which he may have seen as a personal failure. Maybe he became enraged if he perceived the new immigrants as adjusting more easily. That's just speculation, of course.

"A string of attacks in the U.S. in the last month left 44 people dead in all. A gunman killed 10 people and himself in Samson, Ala.; shootings that began with a traffic stop in Oakland, Calif., left four police officers and the gunman dead; an apparent murder-suicide in Santa Clara, Calif., left six dead; and a gunman went on a rampage at a nursing home Sunday, killing seven elderly residents and a nurse who cared for them."

Mass murder is not a job that native-born Americans won't do. But it is significant that two of the shooters in the recent mass murders were immigrants. No newspaper article emphasized that detail. In addition to the Binghamton carnage, Devan Kalathat, an Indian immigrant working at Yahoo, shot his wife, himself and two children plus two in-laws and their baby in his Santa Clara home. His wife alone survived, and she remains hospitalized in critical condition. Kalathat's motivation is mysterious, although the Indian press has theorized a family feud.

Another shocking foreigner killing occurred at Virginia Tech in January. Though not a mass murder, the decapitation of Xin Yang, a female graduate student who was pursuing an accounting degree and had arrived only two weeks previously, by another student, Haiyang Zhu of Ningbo China, was certainly traumatic in its brutality.

The two Chinese were having coffee in a campus cafe when Zhu used a kitchen knife (!!!) to behead the young woman. When the first police officer arrived, Zhu was holding the victim's head. Yang had listed him as the emergency contact person in her college records, so they were obviously acquainted. The motive for the killing may have been simple sexual rejection, made more painful for the killer by being in a country that was not his home. Again, speculation. But Chinese abroad are famously spoiled and self-indulgent.

Another sad case was a mother and three children murdered last month in Conover, North Carolina, in connection with an opium deal. The accused killed himself while on the lam in Utah, so details are sketchy. But apparently an immigrant from Laos, Brian Tzeo, involved himself in the drug trade and now his family is dead.

Choices have consequences. And America's decision to welcome many thousands from Southeast Asia after the Vietnam War has brought diversity we could not have imagined before, including polygamy and shamanism.

Let me be clear. The problem of rampaging immigrants is not guns or unfriendly Americans or conservative radio programs or VDARE.com. The problem is the strangely persistent myth among elites and the media that millions from Somalia and Iraq and Red China can be plunked into our unique society and be expected to get along like they were putting on a different coat. Many may make a go of it (often with taxpayer assistance), but some founder…or blow up.

Immigration as a marker of the imaginary one-worlder multicultural paradise has been a screaming failure. The symptoms are everywhere, from ethnic gangs to mass murder.

Americans still prefer American values to diversity, hate being made to Press 1 for English and believe in traditional assimilation, meaning new residents should "adopt America's culture, language, and heritage."

But many of today's immigrants don't much like America except for the dollar bills. They set about recreating their homeland in ethnic enclaves like Tehrangeles and the Cubanized south Florida. They listen to the ethnic media and adopt the attitude of complaint and advocacy for their tribe.

In earlier times, immigrants were actually happy to be in America, if you can imagine. They were anxious to learn English and become full members of the national community.

Liberal elites' swooning adoration of all things diverse in combination with a legal immigration system set on automatic pilot (140,000 new workers monthly) has brought both too many immigrants overall and excessive diversity for the assimilation process to work.

Immigrant Mass Murder Syndrome is one symptom of our post-1965 immigration disaster.

There's no magic formula of diversity that will lead to perfect kumbaya. On the contrary, a society where people speak the same language, share similar values and understand each others' jokes is a far happier place.

A homogenous nation evokes loyalty, stability and harmony. America could be that way again—if firehose mass immigration is turned off.

Brenda Walker (email her) lives in Northern California and publishes two websites, LimitsToGrowth.org and ImmigrationsHumanCost.org. Her all-time favorite use of tax dollars is the ever-inspiring Hubble telescope.