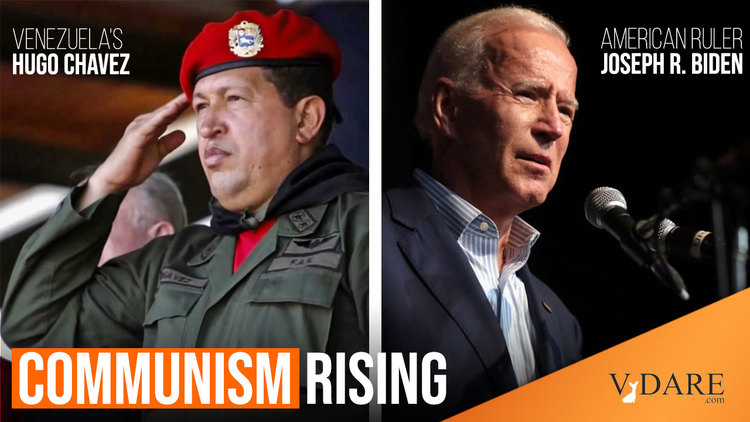 Post-Cold-War Leftist Latin American caudillos—strongman rulers—cloak themselves in socialist ideology and hold sham elections. They engage in socialist and redistributionist policies to placate useful-idiot supporters at home and abroad. However, they simultaneously partner with crony corporations to permit a perverted capitalism that keeps the elite wealthy.

By acting in concert, the Leftist caudillos and their capitalist cronies have generated a new stasis, a relatively stable form of neo-feudalism contrary to the wishes of constituents: a peasant class struggling to survive and a ruthless ruling circle. The educated middle class and legitimate businessmen have little choice but to join the parasitism or leave.

In the U.S., here are chilling similarities in the questionable election of Joe Biden, judicial complicity and the silencing of dissent.

Economist Luigi Zingales of the University of Chicago, who is no fan of President Donald Trump, writes:

In many fledgling democracies, it is impossible to govern without the support of the army.… The threat is so present that elected representatives need to cater closely to the interest of the army in their decisions. The United States is finding itself in this situation, except that the power of the army rests in [Twitter, Amazon, Google, Apple, and Facebook].

A prominent Cuban exile and artist, Ana Olema, has noted the lopsided censorship and has praised the Capitol Hill protesters as “protecting the republic and the nation” from those who would steal it.

In fact, this theft has been proceeding for many years, with Trump’s 2016 victory a bump in the road for the tightening ring of power in Washington, DC. Blatant state weaponization was presaged when President Barack Obama sought reelection in 2012 and used the Internal Revenue Service to suppress the voices of the burgeoning Tea Party movement. [Barack Obama IRS Scandal: 8 Facts About Tea Party Tax Targeting Controversy, by  By Jerry Shaw, NewsMax.com, December 21, 2014]

The conversion to Caudillo-style neo-feudalism is a one-way street, once a firm grip on power is established. Even enormous nationwide protests (read: the January 6 Stop The Steal demonstrations) register little against police goons and turba (read: Antifa) gangs.

Hundreds perished, for example, when standing against Daniel Ortega in 2018 in Nicaragua. For more than a decade, millions have protested the Chavista regime in Venezuela. But that has just brought more political prisoners and despair.

Of course, the Communist Party of Cuba has notoriously clung to power for 60 years, after getting there with a violent overthrow. But more subtly, the United Socialist Party of Venezuela and the Sandinista National Liberation Front in Nicaragua have in recent decades exploited the electoral path to one-party Leftist rule. It starts peacefully, but then makes democratic removal well-nigh impossible.

This stasis has arisen to a lesser extent in Bolivia, and Ecuador. Although with their own idiosyncrasies, all these countries were part of the Pink Tide (marea rosa) of the 2000s: an ascendance of Marxist-Leninists a.k.a. Left-wing tyrants.

A short-lived, feckless pushback came in Argentina. But there and elsewhere the Pink Tide has ratcheted up crony economic control and advantaged the first-mover political parties. They share notes, coordinate, and strategize via the São Paulo Forum, Grupo de Puebla, and Bolivarian Alliance.

The key tactics for establishing one-party neo-feudalism are:

For VDARE.com readers, especially amid social-media censorship and deplatforming, speech controls and economic ostracism will be of particular interest. The bad news: you ain’t seen nothing yet.

In Ecuador, for example, attacks on speech span the gamut: from legal and physical harassment of cartoonists, journalists, and nonprofits to fines for not covering stories the Regime wants covered. Beyond censorship, though, there are regime troll centers and numerous state-owned and funded media operations, which tilt the dialogue in favor of the regime.

The ever presence of Telesur—the network backed by Cuba, Nicaragua, and Venezuela—also crowds out legitimate journalism, much like the CBC in Canada or NPR in the U.S.

Ecuadorians might consider themselves lucky. In Venezuela, the Chavista regime made newsprint so scarce that the country’s top paper, El Universal, for a period ceased printing in 2014, and it was far from alone. In all, 84 newspapers brought complaints about newsprint shortages, and the El Universal owners eventually threw in the towel and sold to a regime-friendly investment firm.

Venezuelans know all too well the financial vengeance brought on them for opposing Hugo Chávez and his minions. Many executives from the PDVSA national oil and gas company, for example, now make their homes in Calgary and Houston, the respective energy capitals of Canada and the U.S. When the tiered exchange rate functioned, outsiders had to join the back of queue, while insiders enjoyed access to ludicrous rates that enabled handsome arbitrage profits on the black market.

However, the economic persecution came after Chávez had first garnered “total control of all institutions of the Venezuelan state,” writes columnist Enrique Standish regarding Venezuela’s turn to communism.

[Chávez] concentrated his efforts in changing the Constitution, packing the Supreme Court, installing soviet-style political commissars in army units, and changing the national identity card and the electoral system to ensure his reelection through manipulation of voter-rolls.

One of the top private TV channels has basically colluded with the regime in controlling media coverage. That is Venevisión. Even the U.S. State Department has noticed the pattern:  U.S. Accuses Chavez of Intimidating Venezuela Free Press , Latin America Herald Tribune June 14, 2009[

Fraudulent elections have become the norm. This after a decade as president (2007–2017), Rafael Correa became unpopular in Ecuador, and he forced public-sector workers to pose as supporters at marches. His PAIS Alliance party, though, controlled and stole the election in 2017 from the Classical Liberal alternative, Guillermo Lasso. This theft ensured continuity for what the party branded, not without irony, as a “Citizen Revolution.”

A key supporter is Grupo Eljuri, a diversified firm with 159 businesses owned by a family of Lebanese origin, which has been awarded major government contracts and is deeply involved in money laundering.

In Bolivia, opposition parties disputed the fraudulent 2019 election and resorted to violence to oust President Evo Morales (2006–2019). However, with Morales banned from running again and in exile, his party’s grip on the economy, unions, and the public sector led to his understudy winning the hastily-held presidential election in 2020. Morales’s former finance and economy minister is continuing the “Movement to Socialism,” and Morales is back enjoying himself in Bolivia.

Neo-feudalism in Latin America provides an endless supply of US-bound émigrés. But, paradoxically, Marxists emigres are also spreading its autocratic ways—sometimes with help from Deep Staters in the US State Department.

Latin American Marxists have a love affair with rewriting constitutions, a habit Cuban scholar José Azel has described as wiki-constitutionalism, to expand entitlements and strengthen their grip on the judiciary. The rewriting of Chile’s constitution as a prime example, along with the FARC terrorists’ entry into politics and judicial manipulation in Colombia.

Abolish the Electoral College? Statehood for Puerto Rico and the District of Columbia?

The US march towards neo-feudalism is manifest with ever greater wealth and power concentrated in Washington, DC. While the transition is not centered on a single party or one unifying figure—unless you categorize turncoat RINOs and Conservative Inc. with Establishment Democrats—its rapid advancement is unmistakable. The Beltway is becoming a gated community, an Alien Nation looking down on flyover America. New York University Professor Michael Rectenwald, author of Google Archipelago,  explains: 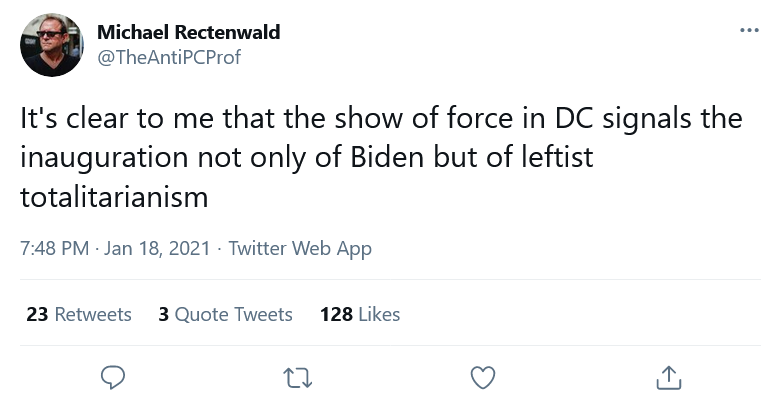 “The show of force in DC signals the inauguration not only of Biden but of leftist totalitarianism.… Corporate oligarchs on top, socialism for the vast majority.”

No-one is coming to save the United States. But it need not exemplify the truism that you can vote for socialism but only shoot your way out. The right actions now can avoid escalating violence and the need for revolution. Opposing the tactics noted above will require more than a hands-off approach. At the least, it requires antitrust lawsuits and combative decentralization initiatives across the political and economic spheres.

Rodric Gordon [Email him] is proud of his British roots and a believer in American ideals. He writes to protect the best of the West, and he leans on his observations as a longtime traveler and journalist in the Americas.