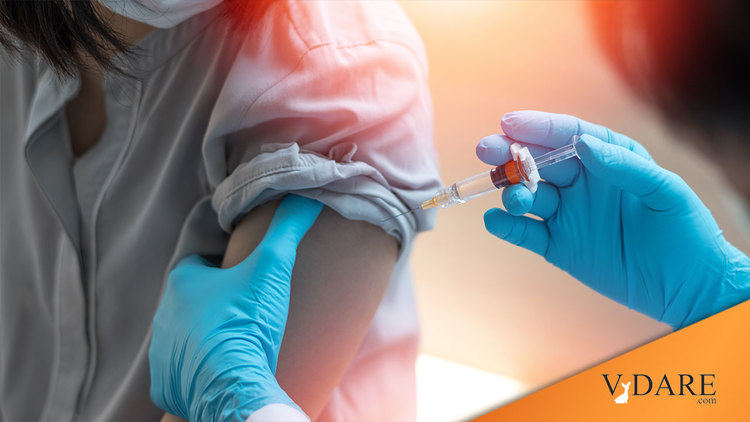 The Biden Regime appears to have become sufficiently embarrassed by its hypocrisy in unleashing hundreds of thousands of illegals into the U.S. while simultaneously insisting that Americans be masked and vaxxed [Biden mandates COVID-19 vaccines for American workers but gives border crossers a pass?, by Laurie Roberts, Arizona Republic, September 14, 2021] that it may now be considering vaxxing (at American taxpayer expense) all future illegals:  Scoop: White House eyes vaccine mandate for migrants, Axios, January 21, 2022. (Needless to say, simply refusing illegals admission to the U.S. is not a Democrat option.) And, of course, the epidemiological damage has already been done. Which raises the question: Did the Biden Regime secretly know that vaxxing is not actually effective? Because there’s increasing evidence that vaccines don’t work.

We all know that those of us who refuse to take the vaccine are wild conspiracy theorists on a par with Flat Earthers. The fact that the people who assert this are the very same people who declared that COVID couldn’t possibly have leaked from a Chinese lab, deplatforming those who dissented, and also those who reported its differential racial incidence, should not make anti-vaxxers in any way skeptical.

However, the intrepid British researcher Dr. Noah Carl—who was recently cancelled by Cambridge University for daring to produce empirically accurate research on race and for associating with other scholars who did so—has led something of a one-man crusade against “official” COVID misinformation. In particular, he has relentlessly highlighted evidence of racial differences in susceptibility to COVID. Cambridge fired him, in part, for showing that stereotypes about immigrants are empirically accurate.

It’s as if a certain kind of fearless, questioning, ruthlessly logical mind seems to also find problems with the “official” COVID narrative.

Well, late last year, Dr Carl turned his attention to the utility of the vaccine and his finding is shocking: In the over-60s, at least, it doesn’t really help.

In a piece entitled “Conditional on Infection, the Vaccine May Not Protect Against Death in Over 60s” [Daily Sceptic, November 22, 2021], Dr. Carl sets out his case.

A new study finds that, conditional on infection, being vaccinated may not protect against death in over 60s. This suggests that most of the protective effect for over 60s comes from immunity against infection, which we know wanes rapidly. https://t.co/AMvjBdae2r pic.twitter.com/XGwIwCRtXj

In summary: the vaccine appears to be effective against COVID in older people due to what are known as statistical artifacts. Most people—including journalists and politicians with their Humanities degrees—don’t understand this, and misinformation is the result. Government scientists, of course, do understand these, or so we would hope, which is slightly concerning to say the least.

Carl observes that a study from Sweden has also found that the vaccine displays “declining effectiveness against severe outcomes” after six months, especially among the elderly, who are most at risk from COVID. He cites an as yet unpublished study of U.S. data which shows the same phenomenon.

The American study, of 19,000 people from U.S. hospitals, was divided between those who had been vaccinated at 14 days prior to infection and those who had not. The two groups were matched on social, demographic and assorted medical risk factors. According to Carl,

In addition, the unvaccinated individuals were selected from among those who’d ever received a flu vaccine. Overall, substantial efforts were made to ensure the two groups were comparable.

The researchers found that vaccinated people had a lower risk of death from COVID than unvaccinated people—but only in those under the age of 60. In those who were 60 or over, there was no statistically significant difference between the two samples.

In other words, when you control for the “Healthy Vaccinee Effect,” then in the over-60s, taking the vaccine is pointless. If you have a sound immune system you will fight COVID off, and if you don’t you will die, whether you have taken the vaccine or not.

The authors of the American study [Six-month sequelae of post-vaccination SARS-CoV-2 infection: a retrospective cohort study of 10,024 breakthrough infections, by Maxime Tequet et al., medRxiv, 2021], have speculated about the causes of their eye-opening results. They suggest that it could be to do with age differences in the body’s response to vaccination.

In other words, older people—the people who may actually need a vaccine against COVID—do not effectively respond to the vaccine due to being old. It doesn’t work on them. Younger people—who don’t need the vaccine unless they have underlying health problems or very poor immune systems—do respond effectively to the vaccine.

But, of course, this means that, for most people, and especially for the elderly, the vaccine is a waste of time.

And perhaps the authorities know that the vaccine is, basically, unnecessary. If it was so important to public health, then why doesn’t President Biden require illegal border-crossers to be vaccinated?

Could the simplest answer by that the “Vax” is, or was, a way of calming down a frightened general public in the face of new a health threat which the authorities didn’t really understand—but had to pretend that they understood in order not to lose control and seem incompetent?

And now that they do understand it more, they can’t admit to their previous panicked lies and half-truths.

The vaccine—like the banks a decade ago—has become Too Big To Fail.