Thanksgiving is racist. How do I know this? Because America is.

Thanksgiving, because it’s originally a Christian holiday, is subject to many of the same Christophobic pressures as Christmas. The Rutherford Institute, which fights the good fight for Christmas in America, notes that

Thanksgiving has also come under fire in recent years. Several years ago, for example, Institute attorneys were contacted by a concerned parent who remarked that whereas in previous years teachers in their school district had been told not to mention Christmas, Easter or anything relating to God, they could no longer even mention the word “Thanksgiving” because “the pilgrims offended the Indians” and “Thanksgiving was never intended to be thanks to God!” Another parent with children in the public schools was upset and concerned when she received a letter from school officials directing classroom mothers not to use plates and napkins with Thanksgiving printed on them at their children’s fall parties.

Thanksgiving is not only Christian in origin—it’s white! It was started in the year 1621 by the Pilgrims, a group of people entirely white, Anglo-Saxon and Protestant.

Sixties black radical Malcolm X used to say: "We didn't land on Plymouth Rock, my brothers and sisters—Plymouth Rock landed on us!" (For some academic looniness on the implicit whiteness of Thanksgiving, see Americans All:  "Of Plymouth Rock and Jamestown and Ellis Island"; or,  Ethnic Literature and Some Redefinitions of "America" by Werner Sollors) 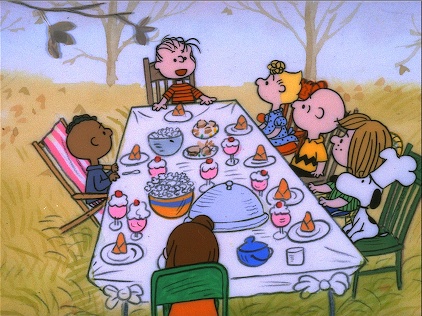 Discriminatory Segregationism in A Charlie Brown Thanksgiving, The Journal of Cartoon Overanalyzations, (a blog, not an actual journal) November 25, 2008

If you’re not sensitive enough to microaggressions, you might not immediately notice that Franklin, the one black child in the strip, is sitting all by himself on one side of the table.

Of course, this is more of the Year Zero approach of the “anti-racist” witch hunter.  The fact that Charles Schulz inserted a small black child in the strip at all in 1968 was an attempt at racial progress.

Some of the loudest people complaining about the idea of Thanksgiving are American Indians, who used to have this continent to themselves, in a Hobbesian state of nature. (See Thanksgiving–History From The Enemy's Point Of Viewand The Thanksgiving Of A Grateful Nation—And The Ingratitude Of A Few.)

For a very pure example of how today’s anti-racism leads to what we call “abolishing America” see American Thanksgiving: A Pure Glorification of Racist Barbarity By Glen Ford, Global Research, November 27, 2013. Here’s a quote:

Nobody but Americans celebrates Thanksgiving. (Canadians have a holiday by the same name, but an entirely different history and political import.) It is reserved by history and the intent of “the founders” as the supremely white American holiday, the most ghoulish event on the national calendar. No Halloween of the imagination can rival the exterminationist reality that was the genesis, and remains the legacy, of the American Thanksgiving. It is the most loathsome, humanity-insulting day of the year – a pure glorification of racist barbarity.

We are thankful that the day grows nearer when the almost four centuries-old abomination will be deprived of its reason for being: white supremacy. Then we may all eat and drink in peace and gratitude for the blessings of humanity’s deliverance from the rule of evil men.

And that’s what “Thanksgiving is racist” is about—not being sensitive to the descendents of the Indians at Plymouth Rock, but abolishing America entirely.

In our original “Why VDARE.com” statement, VDARE.com Editor Peter Brimelow wrote of a 1999 attempt to abolish the Town Of Southampton’s seal

which depicts a Pilgrim and the words "First English settlement in the State of New York."

The grounds: it "features an offensive representation of one gender, one race and one historical period . . ."

Happy Thanksgiving from us at VDARE.com.

11/23/11—Thanksgiving Is An American Holiday—It Is Not Immigration Day!

11/23/11—Thanksgiving Thought: The National Question And The Demographic Diamond

11/25/09—The Fulford File: A Happy Thanksgiving To All VDARE.COM Readers!

11/20/09—View From Lodi, CA Pittsburgh, PA: On Thanksgiving, Will Americans Have Enough Food To Be Thankful For?

11/26/08—The Fulford File, By James Fulford The War Against Thanksgiving

11/21/07—The Fulford File: The Thanksgiving Of A Grateful Nation—And The Ingratitude Of A Few

11/22/06—The Fulford File Happy Thanksgiving From VDARE.com! (While It Lasts)

11/23/05—VDARE.COM Wishes Everybody A Happy Thanksgiving

11/24/04—The High Road to Turkey: An Indian View of Thanksgiving