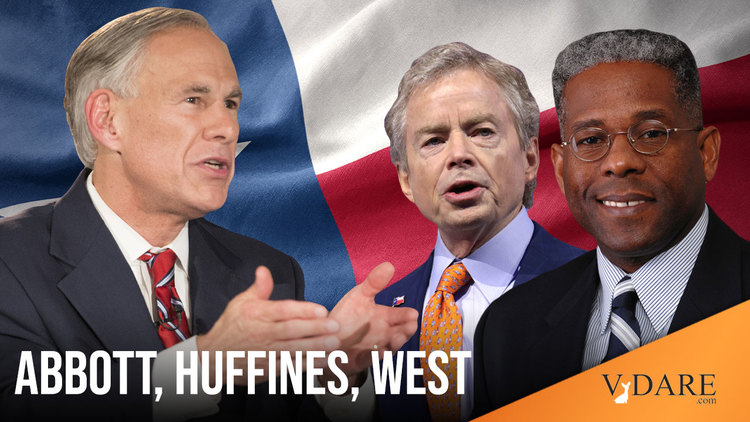 The conventional wisdom is that Texas Governor Greg Abbott will coast to victory in the March 2 primary that pits him against not one but two immigration patriots: Allen West, the famous black retired Army colonel and former Congressman, and state Senator Don Huffines, whose hard-nosed conservative record particularly terrifies Leftists [Don Huffines is the most dangerous man in Texas, by Jessica Montoya Coggins, Texas Signal, October, 14, 2021]. The two are running hard to Abbott’s right on immigration and the National Question, and have basically proposed that Texas create its own immigration policy and give Joe Biden a big middle finger. They know what rank-and-file Texans know: If Biden’s Border Treason isn’t stopped, Texas is doomed demographically, and so is the state’s GOP. Could Abbott lose?

Of course, West and Huffines face a very steep climb. But, shockingly, a recent poll from Paradigm Partners put West ahead of Abbott 38 percent to 33 [LTC Allen West Takes Lead in TX GOP Gubernatorial Primary, Allen West for Governor, January 12, 2022]. (A more recent survey showed Abbott well ahead of both men, as well as a third candidate, Chad Prather Abbott, polling at 59 percent; not one of the other three passed 7 [Poll: Abbott leads GOP primary, O'Rourke by wide margins, by Reid Wilson, The Hill, January 12, 2022].)

If none of the candidates gets 50 percent of the vote, the two top vote-getters face each other in a runoff. That will almost certainly be Abbott, who is endorsed by Donald Trump although there are rumors that might change [Some Trump allies want him to pull his endorsement of Texas Gov. Greg Abbott ahead of GOP primary, by Brian Schwartz, MSN, February 9, 2022], and either West or Huffines. In any case, the Democrat opponent is fake Hispanic Beto O’Rourke.

As far as the GOP race goes, it’s worth reporting just how hard-hitting on immigration both West and Huffines have been. Huffines has called for the Texas National Guard and other state law enforcement units to militarize the border [Huffines Border Plan, Huffines for Governor]. And he has no intention of permitting leftist kritarchs to keep the border open for Biden’s Great Replacement.

“I don’t care how the courts rule,” he avers. ”Texans must be kept safe. I will not ask the federal government for permission. I will do whatever it takes to permanently end the practice of illegal immigration into Texas.”

That includes sending the “entire Texas National Guard to secure the border,” he continues:

This attack on Texas is an invasion. I will use the authority granted in our federal and state constitutions to protect our state.

As governor, I will use the power granted to the position under Article I, Section 10 of the US Constitution. The entire National Guard, Texas Military forces, and necessary state law enforcement personnel will be activated to defend Texans from this invasion, enforce immigration laws and deport illegal aliens, and address the insecurity of our border at the source.

Currently, Gov. Abbott has only mobilized 500 members of our 20,000 National Guard troops. That is woefully insufficient to secure our border.

West too vows to take complete control of the border, and to tell Brandon to stick with eating ice cream cones behind his Ray Bans [The Issues, West4Texas.com]:

I will prepare, mobilize, and deploy the full strength of our Texas National Guard and Texas State Guard to conduct reconnaissance and surveillance missions along our border with the purpose of stopping the flow of persons and drugs along known infiltration routes. As only a small portion of our border wall has been built, simply building a wall is not a panacea; you must have boots on the ground and additional electronic surveillance measures. …

If the federal government persists abdicating their constitutional duties and responsibilities to safeguard the sovereignty of Texas, we will establish a Texas Border Patrol agency with the powers to arrest, detain, and deport illegals from the State of Texas. We will use the funds seized from cartels and illegal immigrant remittances to fund this organization. If the federal government does not abide by the rule of law, Texas will.

Significantly, not wanting to be outflanked on his right, Abbott has responded. Last March, he launched Operation Lone Star, a joint campaign spearheaded by the Texas Department of Public Safety and the Texas National Guard to stop the illegal-alien Zerg rush into Texas [Governor Abbott, DPS Launch “Operation Lone Star” To Address Crisis At Southern Border, Gov.Texas.gov, March 6, 2021].

Problem is, the program appears to be plagued with issues of “morale, manpower, pay, soldier welfare, and reports of suicides since it launched” [Texas Gov. Abbott Fumbles on Border Security, by Pedro Gonzalez, Chronicles, January 27, 2022]. Those reports give Abbott’s challengers powerful campaign ammo.

As well, Abbott is notorious for talking tough on immigration, but then ducking into the bushes when the Leftist media goes after him.

Example: in 2019, a campaign fundraising letter described the massive influx of illegal aliens as an “invasion” that could “transform Texas —and our entire country — through illegal immigration.” In other words, Texas was on the same path as California: demographic ruin.

Reflexively, the Lügenpresse attacked Abbott because of the letter’s supposed connection to a mass shooting that targeted Hispanics in El Paso. He quickly caved and said “mistakes were made,” which conceded the false Leftist premise that the letter’s warning about mass immigration caused the shooting [Gov. Greg Abbott says “mistakes were made” in his fundraising letter before the El Paso shooting, by Alex Samuels, Texas Tribune, August 29, 2019].

In other words, Abbott can be rolled.

Contrast the governor's reaction with that of Huffines, whom the Lying Press targeted for employing Groyper Jake Lloyd Colglazier [Texas GOP Candidate For Governor Won't Fire Staffer With Deep White Nationalist Ties, by Christopher Mathias, HuffPost, January 19, 2022]. Colglazier is an unapologetic America First patriot who is genuinely concerned with America’s demographic future. And to Huffines credit, he refused to kneel before the mob and fire Colglazier [Texas GOP gubernatorial candidate says he won’t fire staffer tied to white nationalist movement, by Emily Hernandez, Texas Tribune, January 20, 2022]. That’s the kind of backbone the Historic American Nation needs in a leader.

Other matters aside, including last year’s disastrous power outage, immigration is the issue facing Texans. Texas is ground zero for the Biden Regime’s Great Replacement. Remember that Biden and his Cuban-Jewish Homeland Security Chief, Alejandro Mayorkas, imported 15,000 Haitians in one fell swoop at Del Rio, Texas. That doesn’t count the tens of thousands of Central Americans and others who have crossed into the state.

BREAKING: I am absolutely stunned by what I’m witnessing right now. We are on a boat in the Rio Grande near the Del Rio international bridge and we are watching as masses of hundreds of migrants walk across the river from Mexico and stream into the US illegally. @FoxNews pic.twitter.com/xXE4pDkpIe

On Monday, we watched Border Patrol drop off bus loads of migrants in downtown McAllen all day long. Every 30 minutes. Hundreds released in front of us. https://t.co/G4ENHuX7sJ

Two numbers for Abbott and the GOP to consider: Texas was 60.6 percent non-Hispanic white in 1990. It is 42 percent white today. That change was in large part driven by the passage of the 1965 Immigration Act and similar immigration measures that have increased non-white immigration to the U.S. dramatically.

Those numbers will continue tightening if the GOP doesn’t wake up and confront the existential threat of mass immigration. Indeed, continued immigration into Texas will likely spell doom not just for the Texas GOP but for the party nationally in presidential elections. It cannot afford to lose the state’s 38 electoral votes.

The Texas gubernatorial race offers a genuine opportunity for immigration patriots to assert themselves and force whoever wants their vote to use the state’s resources to close the border. West and Huffines have promised as much. They are provoking Abbott to at least pretend to do better.

Ultimately, the Historic American Nation needs a serious nationalist government to restore order, reassert national sovereignty, and confront this existential immigration crisis. There are signs of progress in Texas.

Pedro de Alvarado is a Hispanic dissident who is well aware of the realities of race from his experience living throughout Latin America and in the States.

As a native of lands conquered by brave Spaniards but later subverted by centuries of multiracial trickery and despotic governance, Pedro offers clear warnings to Americans about the perils of multiracialism.