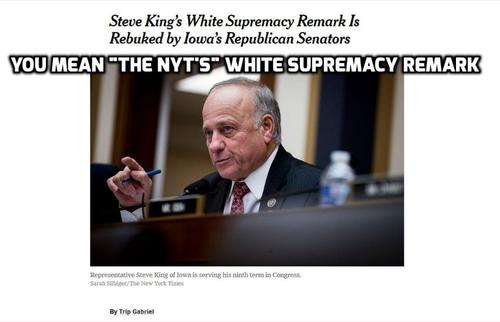 And then they came for Steve King. The immigration patriot Iowa congressman fell for a Main Stream Media setup in The New York Times. [Before Trump, Steve King Set the Agenda for the Wall and Anti-Immigrant Politics, by Trip Gabriel, January 10, 2019]  The clickbait headlines screamed Steve King had asked why “white nationalist, white supremacist, Western Civilization” had “become offensive.” Of course, he hadn’t—King is notoriously inarticulate, the quote was obviously garbled and, significantly, no audio or transcript has been released. But Conservatism Inc. obediently joined in anyway.

The truth: Congressman King was once again defending his non-racial view of American identity. And indeed he has subsequently denounced “white nationalism” and “white supremacy” as an “evil ideology.”

(VDARE.com thinks King is being wimpish about the term “white nationalism.” Thus Editor Peter Brimelow said in our FAQ statement that we publish

…a few writers, for example Jared Taylor, whom I would regard as "white nationalist," in the sense that they aim to defend the interests of American whites. They are not white supremacists. They do not advocate violence. They are rational and civil. They brush their teeth. But they unashamedly work for their people—exactly as La Raza works for Latinos and the Anti-Defamation League works for Jews.

Get used to it. As immigration policy drives whites into a minority, this type of interest-group "white nationalism" will inexorably increase. [Emphasis added].

Still, we note that Jared Taylor has subsequently abandoned the term “white nationalism” as hopelessly smeared, and now calls himself a “white advocate.”)

In King’s New York Times interview, King was quite clearly just asking why Republicans constantly find themselves being called “white nationalists” and “white supremacists” and why “Western Civilization” and “white” have become insults. (Note that the NYT article says ”Mr. King attracted the attention of hate-watch groups like the Anti-Defamation League as he spoke increasingly about preserving ‘Western culture’ or ‘Western civilization.’ The groups consider those buzzwords that signal support to white nationalists”—i.e. no expression of even cultural pride can be tolerated).

But, needless to say, the House GOP is already signaling surrender and will take some kind of “action” against King based on this hit piece. [House GOP Leader: ‘Action Will Be Taken’ On Steve King Over White Supremacist Remark, by Hayley Miller, The Huffington Post, January 13, 2019] Other Republicans are also piling on. Thus, the MSM’s spinning King’s words as a defense of “white nationalism,” even when it was anything but, is simply accepted by Republicans, who immediately begin caving to Journofa demands. [GOP lawmaker: Steve King’s ‘embrace of racism’ has no place in Congress, by Justin Wise, The Hill, January 10, 2019]

This includes Republicans who owe their careers to their color. Thus underqualified black hack Tim Scott was appointed Senator in South Carolina in a silly attempt to somehow show Republicans were not racist. Yet Tim Scott regularly appears in the MSM to preen about how evil and racist his party is.

In July, he stopped the nomination of judge Ryan Bounds to the 9th Court of Appeals because Bounds had written against race-based groups in college. In November, he again opposed at the last minute a Trump judicial appointee, Thomas Farr of North Carolina, based on spurious claims of racism based upon evidence Scott himself had previously discounted. [Tim Scott baffles conservatives with about-races on judges, by Quin Hillyer, Washington Examiner, November 30, 2018]

Now, Tim Scott is condemning Steve King in an article in The Washington Post, implicitly linking him to acts of violence and “havoc that white nationalists and white supremacists have strewn across our nation for hundreds of years”. [Tim Scott: Why are Republicans accused of racism? Because we’re silent on things like this. By Tim Scott, Washington Post, January 11, 2019]

Similarly, minicon Ben Shapiro is calling for Congress to “censure” Steve King and then for him to be primaried, instantly accepting the MSM’s attack against a Congressman who has been utterly stalwart in defense of Israel. [Ben Shapiro Calls for Congress to Censure Steve King Over White Nationalist Comments, Haaretz, January 10, 2019]

Of course, Ben Shapiro was eager to defend Sarah Jeong when the newest member of The New York Times Editorial Board had her history of explicitly anti-white statements revealed. Indeed, he framed his defense of Jeong as a stand against “social media mobs” victimizing people like James Gunn, a far-Left movie director who had made “jokes” about the sexual exploitation of children. David French of National Review defended Jeong as well, saying it was “good” The New York Times was “standing by its hire”. [Yes, Anti-White Racism Exists, by David French, National Review, August 2, 2018]

Both French and Shapiro conceded that what Jeong said was “racist,” but suggested it would be wrong to do anything about it. Conservatism Inc. doesn’t want its constituents trying to retake the levers of cultural and media power from the Left. [Tucker Carlson and the Question of White Victimhood, by Gregory Hood, American Renaissance, January 11, 2019]

Therefore, it’s not  surprising that David French’s magazine National Review is eager to shiv Steve King and stand athwart history crying “We surrender!” “Dump Steve King” is a new editorial from the magazine, in which editors plead that “one of the glories of American history is how we finally shed our shameful racist past”. [January 11, 2019]

This is a startling statement from a “conservative” magazine. Having now granted that American history is “shameful” and “racist,” what exactly is it that conservatives are supposed to conserve? Why not tear down not just Confederate statues, but the Founding Fathers and the American flag itself?

Given this stance, one expects to read articles about “the conservative case for renaming Washington after Martin Luther King” any day now.

National Review argues that Steve King must be purged lest he “tar” fellow conservatives. Again, the implication is that, if this or that person is purged, the accusations of racism will stop. Yet King’s whole point, however awkwardly expressed, is that charges of “white nationalism” and “white supremacy” are proliferating and apply to more and more things. Simply surrendering to this doesn’t accomplish anything.

The appalling Jonah Goldberg [Email him] also condemning King in National Review, declares that “Western Civilization is not synonymous with whiteness”. [Steve King’s bigotry is the antithesis of American ideals, National Review, January 11, 2019].

Yet King himself didn’t say it was. Nevertheless, based on an out-of-context quote from a hostile newspaper, Goldberg and other self-proclaimed conservative “leaders” are eager to sacrifice a champion of the pro-life, limited government principles that they supposedly believe in.

The obvious conclusion: they don’t really care about these principles—or they at least believe those principles are less important than keeping the good opinion of explicitly anti-white journalists and Democrats who openly declare their intention to destroy the country.

The most remarkable claim by Goldberg: “We are supposed to judge people on their individual merits, not keep score based on their ancestry.”

Yet just about every educational, media, government, and corporate institution does indeed judge based on “ancestry,” giving people platforms, privileges, and money based on their non-white, non-Christian, non-heterosexual qualities. (Steve Sailer humorously calls them “intersectional diversity Pokémon points.)

If Goldberg really believes in “individual merits,” then one would expect a push to dismantle the Diversity Industry, starting with Affirmative Action policies. Instead, all we get from Conservatism Inc. are condemnations of conservatives who dare oppose the anti-white racial caste system.

In contrast, consider the open embrace of racial tribalism in the Democrats and among journalists, something conservatives meekly accept. Professional Hispanic Ana Navarro recently expressed her contempt for Americans by actually filing her nails during a television segment when a guest mentioned Americans killed by illegal aliens. Ana Navarro is certainly a “fake conservative”—despite her supposed status as a “Republican strategist,” she can barely contain her hatred for GOP voters.

All of them are essentially nationalists—even imperialists, given their designs on American territory. It’s just that their sense of nationalism has nothing to do with the United States, with the American people, or with this country’s history, traditions, and culture.

Like Luis Gutierrez, these figures are “traitors” only in a technical sense— because there’s no indication they’ve ever really considered themselves Americans.

They are racial nationalists for their own people. And they will obviously ignore any hapless Conservativism Inc-ers pleas to stop practicing “identity politics.” Why should they? In all the cases above, their very political careers would not exist were it not for their status as tribal chieftains.

Indeed, the modern Democratic Party shows Steve King is wrong, though not in the way the Beltway Right thinks. Steve King’s vision appears to be that of an America governed by the rule of law, a country that is part of a larger Western Civilization not defined by race but by culture. But most non-whites want no part of this.

Steve King’s vision is also too much for “conservatives” who view America as a marketplace rather than a country. As shown by their furiously hostile reaction to Tucker Carlson’s passionate call for nationalist populism, Conservatism Inc-ers  think America as a shopping mall, with no identity, history, or purpose aside to serve some intangible god called “the economy” to which whites must sacrifice their culture, children, and future.

But for the Journofa/Democrat coalition, reducing America to a cultureless wasteland isn’t good enough. In their eyes, the culture must be explicitly anti-white.

And to defeat the specter of nationalist populism, Conservatism Inc. will go along with this agenda, tremulously submitting to every smear campaign by journalists and social networking companies. They won’t even give Steve King the benefit of the doubt they give Sarah Jeong, James Gunn, and others who said actually hateful things.

It must be said plainly:. Steve King did nothing wrong. If anything, he wasn’t forthright enough.

The truth: the Beltway Right is already preparing for a post-Trump future and wants to purge National Conservatives from its ranks. They were always going to come for Steve King given the first opportunity.

Either America replaces Conservatism Inc.—or it will replace America.