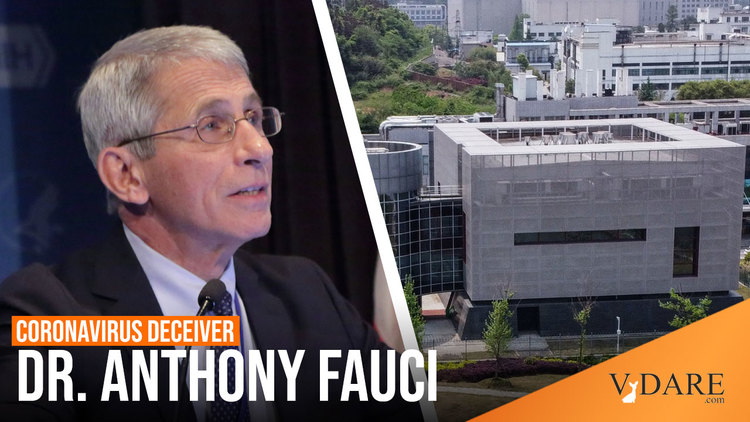 So Fauci Was WRONG About WuFlu—And About Trump’s China Travel Ban, And AIDS. WHY?

Earlier: So The Ruling Class Was WRONG WRONG WRONG About Covid-19. What Else Are They Wrong About?

I wrote recently about the extraordinary collapse of the elite-enforced Narrative that Covid-19 could not possibly have originated in a Chinese laboratory. I pointed out that this had been preceded by the apparently less-mentionable Narrative Collapse on the question of whether the disease has a differential racial incidence (it does). These abrupt reversals obviously raise serious questions about Dr. Anthony Fauci, the supposedly impartial chief of the National Institute of Allergy and Infectious Diseases and public face of the U.S. government’s response to the pandemic  [Stanford epidemiologist says Fauci's credibility is 'entirely shot', by Adam Shaw, Fox News, June 5, 2021 ] But these questions are not surprising to VDARE.com: we were stuck, not just by Fauci’s evasion of the racial incidence issue, but also by his Politically Correct embrace of the ludicrous idea that the disease is spread by Global Warming in contrast to his resistance to the obvious reality that the spread of all diseases—not just Covid-19—is inevitably enhanced by globalization and mass immigration.

Fauci’s recent schedule has reportedly been frantic [Thousands of emails from and to Fauci during the pandemic's early days were published. Here's what they show about him,  by Christina Maxouris and Paul LeBlanc, CNN, June 3, 2021].But he took the time last year to proclaim that the fashionable Leftist cause of Climate Change was somehow relevant to the rise of Covid-19 and would mean that the future would be marked by more and more pandemics.

When pressed on how Climate Change would create this dystopian future, spokesmen explained that animals would come into more contact with each other, because they would move north, and people would spend more time indoors with the air conditioners on, and this could incubate pathogens [The Startling Reason Dr. Fauci Fears a Future "Acceleration of Pandemics," by Colby Hall, BestLife, September 10, 2020].

The latter justification is clearly laughable and the idea that the former would cause Covid-19-type pandemics is highly speculative. This was Fauci just misusing Covid to promote Leftist ideas.

And we know, anyway, that what stops the spread of any kind of pandemic is “shutting the borders”—and doing so immediately, as soon as evidence of a serious pandemic comes to light.

This policy, of splendid isolation, is why, by July 2020, New Zealand was able to declare itself “Covid free” [How did New Zealand become Covid-19 free?, by Anna Jones, BBC News, July 10, 2020]. I say this although I have been deeply skeptical (albeit for other reasons) of New Zealand Prime Minister Jacinda Ardern.

VDARE.com Editor Peter Brimelow actually predicted in his 1995 anti-immigration book Alien Nation that “disease incubated in the teeming human petri dishes that Third World cities now comprise may be the chance factor that finally crystallizes immigration as a political issue in the United States.” Of course, this would require that the U.S. Regime Media actually report the facts—and be willing to close the border.

But Fauci, of course, famously opposed President Trump’s China travel ban. He claimed it  “would create a lot of disruption economically and otherwise and it wouldn't necessarily have a positive effect” [Fauci, who opposed China travel ban and praised their transparency, criticizes Trump response, by Stephen Sorace, Fox News, March 11, 2021].

Here we see Fauci mis-using Covid-19 to conform to Leftist ideas—this time Open Borders. And if you doubt that this is what Fauci was doing, you only have to read his emails.

Thus Fauci was privately warned, in January 2020, by scientist Kristian Anderson, with regard to Covid-19, that “some of the features (potentially) look engineered,” meaning that it had almost certainly leaked from the laboratory in Wuhan and that it might be particularly deadly. In February 2020, a Cornell University scientist emailed him to argue that Covid had leaked from the Wuhan Institute of Technology.

Yet despite this, Fauci was publicly insistent that the virus had not leaked from this institute, something for which the Wuhan Institute—which at least arguably knew that it had—thanked Fauci.

Indeed, in a private email to the institute’s chief, George Gao, Fauci implied that the careful scientists who had written to him had psychological problems: “Thank you for your kind note. All is well despite some crazy people in this world,” Fauci wrote [Chinese virologist who was among first to tout Wuhan lab theory says Fauci's emails back up what she's been saying all along, by Christopher Eberhart, Mail Online, June 3, 2021].

So, to be clear, Fauci knew, at the very least, that there was a very realistic possibility that Covid-19 had nothing whatsoever to do with Climate Change and that it had in fact leaked from the Wuhan Institute. Nevertheless, he chose to play for Leftist applause by publicly stating that Covid-19 might be something to do with manmade Global Warming.

Thus he ensured that the U.S. government was less likely to make the right decisions for the good of the American people, resulting in unnecessary financial ruin, illness and death. Fauci knew perfectly well that the novel virus, having been manipulated in a laboratory to be extremely virulent, might be catastrophically dangerous. However, he chose to oppose the only policy which might have protected America from it, which would be banning travel to or from China and, better yet, completely sealing the borders.

Furthermore, Fauci acted in this fashion during one of the most acrimonious, violent and contested presidential election campaigns in US history. And in doing so, it could be argued, he helped to a create a situation in which—for a variety of reasons over which there is heated disagreement—the election was pushed towards Joe Biden.

The arguments that he needn’t have listened to the research indicating that Covid-19 was manmade, or even that it was a bio-weapon, can be dismissed out of hand.

The reports weren’t “peer-reviewed”—So what? Scientific advances occur too quickly these days for scientists to have to wait half a year for their research to be “peer-reviewed” which is why they pre-publish it online and even cite the pre-publications.

And, anyway, as academia has become corrupted by Leftist scientists [Lackademia: Why Do Academics Lean Left?, by Noah Carl, Square Space, 2017], all serious researchers know that peer-review can’t be trusted anymore, at least when it comes to contentious political issues. We are entering a new Dark Age.

The amazing thing is that this isn’t the first time that Fauci has adapted science to the Politically Correct party line. As Michael Fumento (author of the prescient but extremely unwelcome Myth of Heterosexual Aids) wrote in 2020: “Nobody did more to kick off the U.S. AIDS alarm than Fauci.” [Dr. Fauci's recurring disease 'nightmares' often don't materialize, Fumento.com, July 12, 2020]

It turned out, of course, that AIDS was almost exclusively confined to homosexuals. But Fauci suffered no consequences for his mistake.

In a position of great authority, Anthony Fauci told America’s Hostile Elite what it wanted to hear during a crisis rather than what he knew might be the horrible truths that might imply that its opponents were correct—that the disease might be China’s fault, that it discriminated by race, and that the borders should be shut down.

In doing so, Fauci has indirectly caused a huge amount of needless suffering and death—and it could even be argued, if no more than that, that he subverted US democracy.