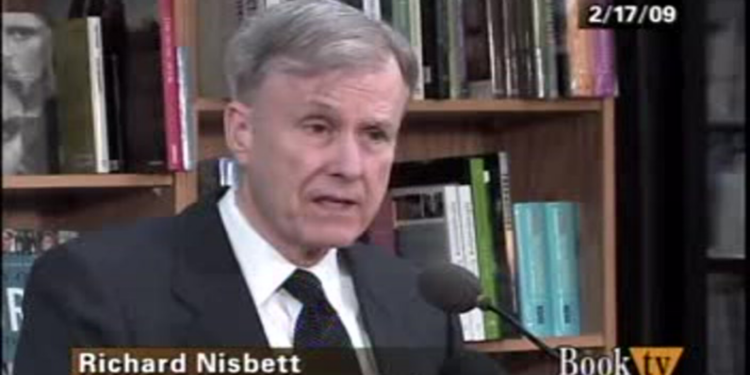 Selling Out And How To Do It—The Case Of Richard E. Nisbett

When James D. Watson was driven from his post at the famous Cold Spring Harbor medical research laboratory for making politically incorrect remarks about IQ, Richard E. Nisbett, a psychologist at the University of Michigan [email him], helped put the boot in, publishing an op-ed in the December 9, 2007 New York Times under the memorable title All Brains Are the Same Color. 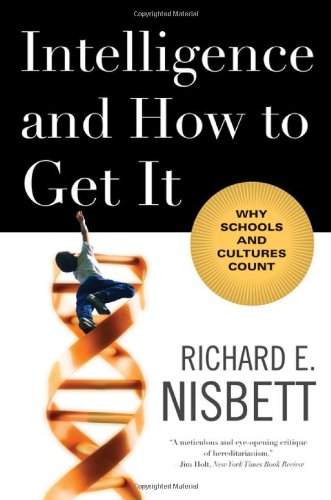 Now, Nisbett has a book out entitled Intelligence and How to Get It: Why Schools and Cultures Count , which has greatly excited such intellectual luminaries as New Yorker writer Malcolm Gladwell, who nominated Nisbett for Time's Top 100 Most Influential People in 2009, and NY Times columnist Nicholas Kristof [Rising Above I.Q. June 6, 2009].

Indeed, Intelligence and How to Get It seems to be set in some alternative universe in which Watson's heresies are the almost-unchallenged orthodoxy and Gladwell is some pixel-stained wretch barely scraping by, while I'm pulling in the big bucks making speeches to national sales conventions. Poor Nisbett is a just a lonely dissident bravely speaking truth to power—in Nisbett's book.

It resembles a book-length version of one of those David Brooks' columns in the NYT in which he tries to exorcize the voice of his conscience telling him that I'm right.

Nisbett never explains his bizarre polemical strategy. But, I presume that after a few drinks, he might justify it like this: “Well, sure, a bunch of innumerate journalists and excited ideologues like Stephen Jay Gould convinced themselves and a lot of their more naïve readers that all this IQ stuff was hooey, but you know and I know that the kind of thing you write in VDARE.com about IQ is actually the conventional wisdom among those few who know what they are talking about!”

Nisbett's book thus concedes vast swathes of normally disputed territory: according to Nisbett, 1] IQ is real and important; 2] IQ tests measure it accurately; 3] there are sizable racial gaps in average IQ; and 4] IQ tests are not culturally biased (which will come as a big surprise to Sonia Sotomayor). On many of the issues I covered in my FAQs on the subjects of IQ and race, we wouldn't have much to disagree over.

Nisbett, however, tries to draw a line in the sand in two places by:

As for Nisbett's first dogmatic decree, well, time will tell. Soon—the DNA data is flooding in.

Nisbett's second decree—the potential effectiveness of social engineering—is particularly popular at the moment because of the Obama Administration's lavish funding of education.

Unfortunately, despite his book's self-help title, Nisbett hasn't figured out an actual plan for increasing IQ among one's own children, much less among the masses of black and Hispanic poor.

Depressingly, out of the countless educational experiments tried over the last five decades, he mostly cites the same handful of fabled preschool intervention studies that I've been reading about for much of my life: the Perry Preschool Program of the mid-1960s, the Milwaukee Project of the late 1960s, and the Abcedarian Project of the late 1970s.

Even Nisbett laments, “a huge amount of research needs to be done to establish whether something like the Perry or Milwaukee or Abecedarian program would be effective and feasible if scaled up to national proportions.”

Yet, if these programs actually worked in the past, why haven't they been replicated in the last 30 years? The problem in Nisbett's book is rather like the one that Herodotus, the Father of History, wrestled with in the 5th Century B.C.: the older the tale, the more miraculous it is.

For example, Nisbett devotes pages 124-126 to recounting with a straight face the successes at raising black test scores of Rick Heber's Milwaukee Project. This was an expensive late 1960s study much like the Early Childhood Education endeavors that Barack Obama is promoting.

Amusingly, Nisbett never mentions that Heber turned out to be a con man who went to prison for fraudulent misuse of Milwaukee Project funds! The Concise Encyclopedia of Special Education says:

HEBER, RICK R. (1932-1992)
… Heber is best known for his work as principal investigator of the Milwaukee Project and the subsequent controversies surrounding the project. … Heber was a member of the faculty of the University of Wisconsin at Madison when he was indicted on charges stemming from the misuse of federal funds allocated to the project. He was subsequently convicted and served time in the federal prison in Bastrop, Texas. Previously a respected scholar in the field of mental retardation, his academic work on the Milwaukee Project has been called into serious question. It is now questionable whether the project ever actually existed as it had been described by Heber.

And here's the Encyclopedia's description of this Milwaukee Project that Nisbett takes so seriously:

The term Milwaukee Project is the popular title of a widely publicized program begun in the mid-1960s as one of many Great Society efforts to improve the intellectual development of low-achieving groups. It was headed by Rick Heber of the University of Wisconsin (UW), Madison, who was also director of the generously funded Waisman Institute in Madison. The Milwaukee Project was a small study with some 20 experimental subjects and 20 control subjects. It was not reported on by the investigators in any refereed scientific journals, yet its cost was some $14 million, mostly in federal funds, and its fame was international, since it claimed to have moved the IQs of its subject children from the dull-normal range of intelligence to the superior range of intelligence.

Spending $14 million in 1960s dollars on 40 children over a half dozen years is quite an accomplishment!

Enthusiasm, controversy, and scandal subsequently surrounded the history of the project. Its claimed success was hailed by famous psychologists and by the popular media. Later in the project, Heber, the principal investigator, was discharged from UW, Madison and convicted and imprisoned for large-scale abuse of federal funding for private gain. Two of his colleagues were also convicted of violations of federal laws in connection with misuse of project funds. …. However, the project received uncritical acceptance in many college textbooks in psychology and education.

To be fair to Nisbett, perhaps he never heard of Heber's imprisonment 28 years ago. After all, it didn't get much coverage from the media outlets who had earlier trumpeted his press releases. On the other hand, imagine how you would never hear the end of it if, say, Charles Murray wound up in the slammer …

Moreover, it never quite dawns on Nisbett that educational projects aren't exactly like chemistry experiments, which should be perfectly reproducible. Unusually successful schooling experiments are more like hit movies, which notoriously depend upon the temporary and highly unstable commingling of charismatic individuals. For example, the original 1962 Manchurian Candidate is famous for being a daring movie where everything clicks. It shouldn't work. But it does. In contrast, The Manchurian Candidate was remade in 2004 at a cost of $80 million by a team of Oscar-winners (Denzel Washington, Meryl Streep, and Jonathan Demme), but the remake was instantly forgotten.

As an even closer analogy, consider merely all the movies about dedicated teachers who overcome societal prejudices to make a difference in the lives of their students. (IMDB lists 31.) A few of them triumphed (for example, Maggie Smith's The Prime of Miss Jean Brodie), while others fizzled (Michelle Pfeiffer's Dangerous Minds). You might think that Hollywood would have a formula for reliably churning this genre of films out by now, but each new one remains a gamble.

Ironically, Nisbett's best advice for lifting your IQ is to choose your parents wisely—i.e., get yourself adopted as an infant by rich parents.

Nisbett is impressed by a 1989 study by two psychologists Christiane Capron and Michael Duyme. They attempted to overcome the usual “restriction of range” problem with adoption studies (agencies don't let people who are likely to be lousy parents adopt children) by spending years searching for 40 adoptees whose biological parents were from the top 15 percent or bottom 15 percent of French society and had been adopted by parents at the top or bottom. They only found eight highborn adoptees who had followed the Oliver Twist path in being brought up in poverty, but they managed to fill out their other three cells for a sample size of 38. (Assessment of effects of socio-economic status on IQ in a full cross-fostering Nature, August 17, 1989.) On average, those children lucky enough to be placed among the rich averaged 12-point higher IQ scores at age 14 than those placed among the poor. That's a bigger nurture effect than typically seen in American adoption studies, but it sounds plausible to me. (Note, however, it's not clear that this IQ boost extended past puberty. It appears that, while children can be molded to some extent, adults tend to choose their own environments, with levels of intellectual stimulation best suited for their genetic endowments.)

And consider the cost to reproduce the benefits of having wealthy parents for millions of poor children. It's not just the additional out-of-pocket expenditures, but the tens of thousands of hours of time spent by well-educated people talking individually to their children: likely seven-figures per child.

And yet, in this most pro-nurture of all the many adoption and twin studies yet done, the nature effect was still larger than the nurture effect. Highborn children averaged 16 points higher in IQ than lowborn children compared to the 12-point advantage seen among those raised rich.

Therefore, assuming this tiny study is correct, society could eliminate roughly 75 percent of the IQ gaps caused by genetic differences. All it would take is for the government to make parents in the upper and lower sectors of society exchange their children.

It would be like Mark Twain's The Prince and the Pauper —as rewritten by Pol Pot.

I had some hopes for Nisbett. His 2004 book The Geography of Thought: How Asians and Westerners Think Differently … and Why was an intriguing exploration of how Northeast Asians tend to think in terms of context and harmony while Americans are more object-oriented and innovative.

Unfortunately, however, Nisbett's handling of the evidence in Intelligence and How to Get It gravely undermines his own reputation. Terms like “cherry-picking,” “scattershot,” and “disingenuous” come to mind. Arthur Jensen and J.P. Rushton have already pointed out many of the ethical shortcuts Nisbett has taken in order to appeal to the Gladwellites.

Still, there's no doubt that the intellectual establishment, and very large numbers of well-meaning ordinary people, desperately want to buy what Nisbett is selling.

He's a sell-out, but a successful sell-out.

So much the worse for America.

[Steve Sailer (email him) is movie critic for The American Conservative.