Said In Spanish: Who Needs Russians? Meddling Mexicans Telling Americans What To Do About Death Penalty; Etc. 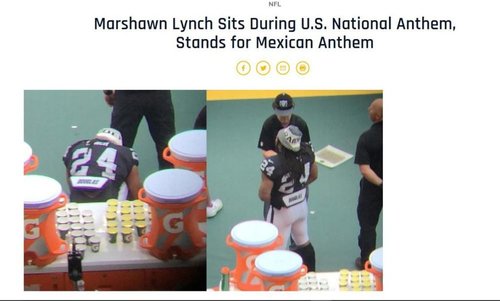 The NFL’s disrespect of our national anthem went south of the border, as Raider Marshawn Lynch sat in protest of the Star-Spangled Banner, but rose respectfully for the Mexican national anthem last Sunday.

President Trump was among those who objected:

Marshawn Lynch of the NFL’s Oakland Raiders stands for the Mexican Anthem and sits down to boos for our National Anthem. Great disrespect! Next time NFL should suspend him for remainder of season. Attendance and ratings way down.

But this is just part of a bigger panorama—the continued expansion of the NFL in Mexico. The NFL doesn’t care what its white, Middle American fans think but it does care desperately about outreach to Mexicans.

Mexico already has the second highest contingent of NFL fans in the world after the U.S., and all NFL games are broadcast there with attendant Spanish-language commentary.

Indeed, there are hopes an NFL franchise will be established in Mexico.

Arturo Olive (the taller man at right) is the official responsible for promoting the NFL in Mexico.

In a profile of him, Las Angeles’ Spanish-language daily La Opinión noted:

Mexico has more than 20 million NFL fans…which makes it the biggest market outside the United States… The director of NFL Mexico is responsible for directing the league’s business in a country that this November 19th will be the site of an official game: Oakland Raiders vs. New England Patriots.

And it was that November 19th game which featured Lynn’s protest.

Last year, the NFL had its first regular season game in Mexico in eleven years, but it plans on hosting one regular season game there a year through 2021 [NFL returns to Mexico, aims to make this an annual occurrence, by Judy Battista, NFL, November 18, 2017]. As Olive was quoted noting in La Opinión, one of the NFL’s “principal objectives” is to grow its fan base in that country.

As La Opinión observed, “a fan who lives in Mexico can watch each week on free-to-air TV or cable more NFL games than one who lives in the United States.” And as Olive claims, this wasn’t a “spontaneous generation” but something the NFL has been “working for strategically.”

The NFL had best be careful though; in Mexico they don’t tolerate disrespect of the flag or the anthem. Then again, I doubt the NFL would tolerate it in Mexico either.

Besides, the NFL has to make up those lost American fans somewhere.

Meddling Mexico Fights The Death Penalty In The US

In 2000, the SRE established the Programa de Asistencia Jurídica a Casos de Pena Capital en Estados Unidos, the Program of Legal Assistance in Cases of Capital Punishment in the United States. The SRE is now congratulating itself for defending these murderers.

The SRE (Secretaría de Relaciones Exteriores/Mexican Foreign Ministry) reports that, from the year 2000 to the present, the Programa de Asistencia Jurídica a Casos de Pena Capital en Estados Unidos has achieved the release from the death penalty of 1,014 Mexicans, of a total of 1,150, in American prisons. That’s a reversal of the verdict in 88% of the cases.

You’ve got to admit, 88% is quite effective. And in cases where the Programa was involved in the U.S. legal process from the beginning, it achieved an even more oppressive 98%.

In other words, if the Mexican foreign ministry gets involved in the case of a condemned Mexican murderer, he almost certainly won’t be executed.

You might be saying, “But some Mexicans are still executed in the United States.” True, but if the SRE’s figures are correct, these are only a small fraction of those Mexicans who receive the death sentence from an American court.

In a press conference, Carlos Manuel Sada Solana, Undersecretary for North America, explained that this Program “has given encouraging results in the defense of our fellow Mexicans” and explained that through this mechanism the government of Mexico does not attempt to condone crimes [perish the thought! —AW] but to promote that all Mexicans have access to due legal process.

This Carlos Sada, one of those white Mexicans who run the Mexican government,  is a longtime meddler in U.S. affairs, having served previously as Mexican Ambassador to the U.S. and a former Mexican consul in several U.S. cities (New York, Los Angeles, Chicago and San Antonio).

“I express my firm condemnation of the execution of the Mexican Rubén Cárdenas Ramírez in #Texas, which violates the decision of the International Court of Justice. My deepest condolences to the mourners.” –President of Mexico https://t.co/P2cZ5BR7kb

The International Court of Justice had ruled against the U.S. for not notifying Mexico of the arrest of 51 Mexicans, including Cardenas, and denying these Mexicans “the right to consular assistance from their government.” 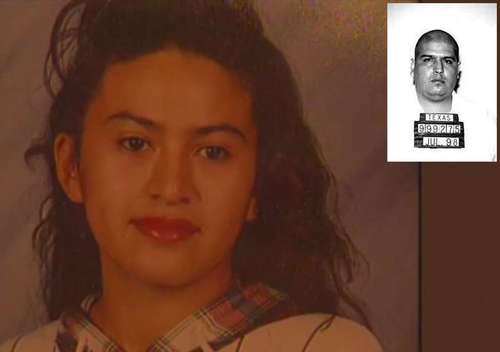 As a former long-time American expatriate in Mexico, I support consular notification. But I wonder if at least some of these arrested Mexicans tried to pass themselves off as Mexican-Americans upon arrest.

None of this should distract from what Cardenas actually did. He was executed for kidnapping, raping and murdering his 16-year old cousin in 1997— twenty years ago. (Pictured right—Mayra Laguna, deceased, with inset picture of Cardenas.) The victim’s sister didn’t object to the execution, as she was quoted as saying that it brought the family “true peace”.

The very white Pilar Marrero, the Venezuelan-born columnist for La Opinión, is so concerned about the security of our country she wants to tell us DREAMers are essential to national security. 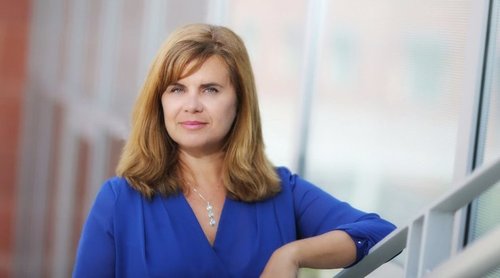 Marrero cites Robert Gates, Secretary of Defense under those great defenders of American sovereignty George W. Bush and Barack Obama, to support her case. In the New York Times (Carlos Slim is the biggest single shareholder), Gates recently called on Congress to provide the DREAMers with a pathway to citizenship. After all, according to Gates, it would help the military recruit enough personnel.

Gates has not been the only one who in recent days has argued that the Dream Act to legalize the young people with DACA and other young immigrants, is necessary for the future of national security and the Armed Forces of the United States

“The figures and the experts agree: The Armed Forces of the United States are suffering serious recruitment problems and young immigrants can be one of the most effective solutions,” Marrero intones.

This isn’t a surprising argument, as Americans are constantly lectured about how inadequate our society is without immigrants and how our economy or social programs “need” them. And this argument is designed to con conservatives, too many of whom sign on to anything once they hear the word “military” or “defense.”

La Opinión quoted Margaret Stock [Email her] who retired from the military and is now an immigration lawyer. (No conflict of interest there):

This country has created an arbitrary and absurd system of migratory laws that has impeded hundreds of thousands of young people from obtaining legal residence, something that is getting harder.

Because the armed forces “have had to lower their standards and recruit persons born here who have committed crimes,” we are told, we must recruit immigrants.

Then Marrero quotes another “unbiased” source: the National Immigration Forum, which released its own report on the issue.

According to the NIF:

From now on, the only growth in the 18-29 age group from which you can recruit comes from immigrants and children of immigrants. They will play an extremely important role in the capacity of maintaining a volunteer military force.

We are also told nearly 28,000 DREAMers speak Korean and 9,000 speak Russian, “two necessary languages for the strategic preparation of the military forces of today.”

And so on and so on. The arguments for Amnesty are so creative.

But before worrying about a recruitment crisis, why don’t we first figure out what the purpose of the American military should be in 2017?

1) To carry out social engineering by putting women in the infantry, promoting homosexuality and paying for sex-change operations?

2) To democratize the world by getting mixed up in Middle Eastern civil wars and sending our troops all over the globe?

3) To defend the sovereignty of the United States?

If number 3 is the answer, maybe we don’t need so many recruits anyway.