SAID IN SPANISH: VOX’s Victory—Spanish Patriots Get A Spain-First Voice In Parliament

In Spain, a relatively new political party called Vox (Latin for voice) that advocates immigration patriotism and traditional Spanish values has increased its strength in the Congreso de los Diputados, the lower house of the Spanish parliament, from zero to 24 seats, then to 52, in two elections within seven months. It’s now the third largest political party, after the socialist PSOE and the conventional right  Partido Popular. Vox’s overall platform is Spain First; a key issue is immigration, particularly with respect to Muslims. But the party platform is also socially conservative on issues we’re all familiar with. Vox is growing, and the Left is terrified.

How terrified?  The Nation calls Vox “a rabid Spanish nationalist party” [The Left May Finally Govern in Spain, by Sebastiaan Faber and Bécquer Seguín, November 22, 2019]. But Steve Bannon called it  “one of the most important and interesting political parties in Europe” [Steve Bannon: ‘No apoyamos al separatismo, el Estado nación es algo importante’ (“We do not support separatism, the nation state is something important”), by David Alandete, ABC International, February 3, 2019].

“Rabid nationalist” means Vox—led by Santiago Abascal, who looks like a real Spaniard—appeals to Spanish patriots. Other gifted leaders are Javier Ortega Smith (the surname deriving from his Anglo-Argentine mother) and Madrid power couple  Ivan Espinosa de los Monteros, a scion of  Spanish nobility, and his wife Rocio Monasterio , daughter of a Cuban father and Spanish mother.

A wishy-washy moderate party Vox is not. Its leaders seem to relish controversy and shocking Spain’s politically correct ruling class.

The party’s immigration platform 100 Medidas Para La España Viva (“One Hundred Proposals For the Living Spain”) is something Trumpsters can appreciate:

Immigration will take into account the necessities of the Spanish economy and the capacity of integration of the immigrant,” the platform reads. “It will establish quotas of origin giving preference to nationalities who share language and important bonds of friendship and culture with Spain.

Proposals  23-25  would protect Spain from the growing Muslim host that has established beachheads across Europe.

Not coincidentally, the party fondly recalls heroes of yore such as El Cid and the glories of the Reconquista, the centuries long quest to retake Spain from the Islamic Moors, which ended when they surrendered to Ferdinand and Isabella at Granada. 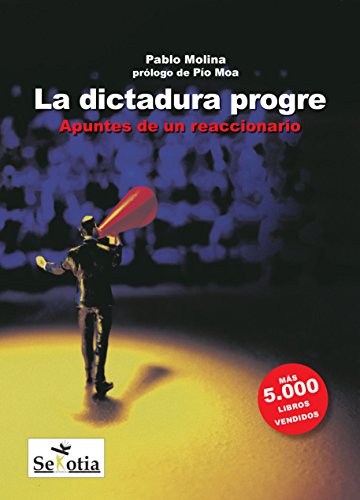 Today’s battle to reconquer Spain pits Vox not only against Islamic radicals but also the dictadura progre, the “progressive dictatorship,” Spain’s version of our own SJW-Cultural Marxist elites, from the title of a book by Pablo Molina, published in 2006,  La dictadura progre. Apuntes de un reaccionario. [“The Progressive Dictatorship. Notes of a Reactionary.”]

Thus, with that appeal to Spain’s shared culture with the West in general and other Spanish-speaking countries in particular, Vox combines combative social conservatism and a cry to preserve traditional Spanish culture.

American social conservatives would feel very comfortable with Vox’s social conservatism. It opposes abortion, same-sex marriage (legal since 2005) and radical feminism. The party emphasizes the role of parents as educators of their children, opposing leftist indoctrination in the schools.

Vox stands alone among Spanish parties in opposing a gender violence law passed in 2004,  not because it denies the existence of crimes against women, but because it favors legislation “that equally protects the elderly, men, women and children,” as item 70 in the platform says.

Rare for a European party, Vox is more open to the right to bear arms. It wouldn’t satisfy an American Second Amendment supporter, but the party might move that way.

Thus its Proposal 68 recognizes “hunting, as a necessary and traditional activity of the rural world.” and envisions the consolidation of current gun licenses to have only one nationally. Meanwhile, Proposal #86 recognizes the right of self-defense: “Spaniards can make use of proportional force to defend their home, amplifying the concept of legitimate defense.”

And, the party leader is licensed to carry it [¿Por qué nadie vota a Santiago Abascal? (“Why Doesn’t Anyone Vote For Santiago Abascal”), El Confidencial, June 11, 2016].

As for the party’s respect for Spanish tradition and vilified heroes of the past, consider these two items.

It backs bullfighting and proposes a law to protect it, a red cape to the Animalista party, which despite its cool logo doesn’t have a seat in the Congreso.

And it opposes Spain’s Ley de Memoria Histórica (“Historical Memory Law”) that deals with the legacy of the Spanish Civil War (1936-1939) and the resultant Franco Regime (1939-1975). That’s something of a parallel with our own controversy over Confederate monuments. Proposal #9 states

No parliament is entitled to define our past, and still less to exclude the Spaniards who differ in their definitions.  They cannot use the past to divide us, on the contrary, those who, from different historical perspectives, fought for Spain, should be honored together.

As for foreign policy, Vox is pro-Israel and pro-NATO (two U.S. bases are in Spain), and supports increased Spanish defense spending.

Unlike American conservatives who prefer decentralization of power, the Vox party is centralist. It would abolish the regional parliaments of the 17 autonomous communities and create a unitary state with provinces as the next level of government.

Thus, Vox opposes the Catalan independence movement and is stronger in parts of Spain where people identify as Spaniards and not as Catalans or Basques.

It's not an exact parallel, given the ethnic differences within Spain, but in our own War Between the States,  Lincoln's Union government was certainly against secession.

Along with that Spain-First platform, multiple factors played a role in elections on April 28 and November 10. In April, Vox won 10.3 percent of the vote to reach the 24 seats in the Congreso, then improved that total to 15.1 percent in November, which more than doubled its presence to 52.

This map, via Electoral Geography 2.0, shows the regions with the most support for Vox: 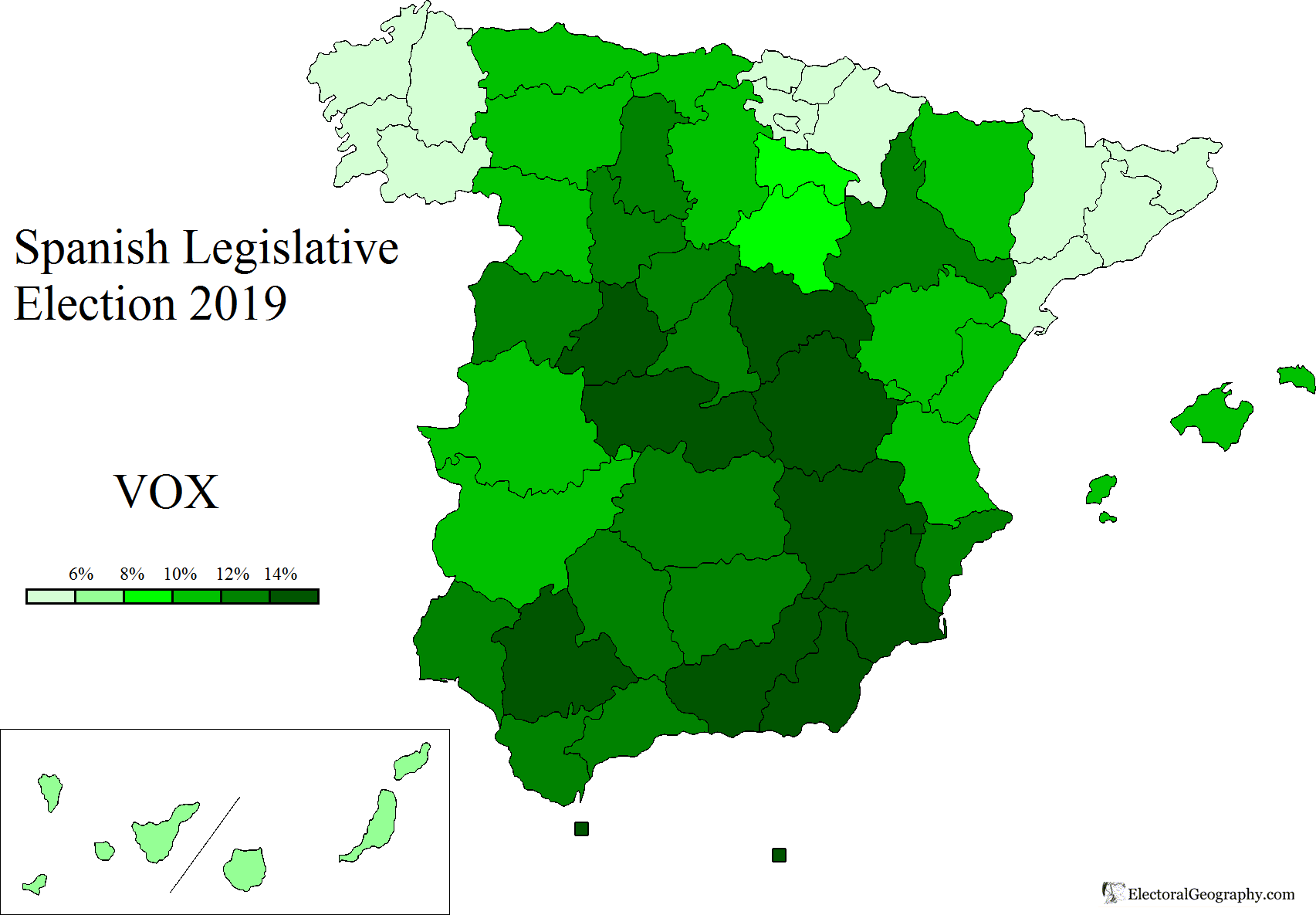 Vox participated in five pre-election debates. It appeared in one of the nine debates before the vote in April, and all four of the debates preceding the vote in November. Abascal was said to have done very well in the debate on November 4. When Spaniards had the chance to hear Vox, they voted for Vox.

Other events before the second election, beyond Vox's control, actually helped:

On election day, support for the center-right Ciudadanos party collapsed. Its former supporters voted for Vox or sat out the election. Turnout dropped by 2 million from April to November.

As it is elsewhere in Europe, the right is rising in Spain. Spanish patriots now have a political home.