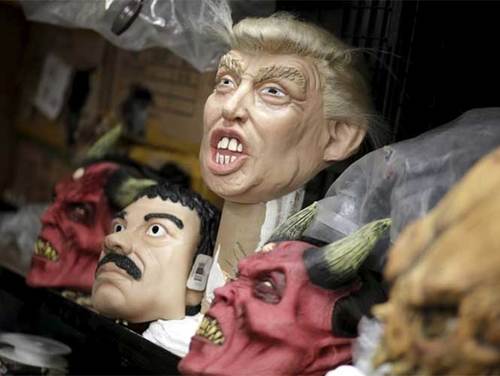 The Spanish-speaking media, U.S. and Mexican, is obsessed with bashing Trump. And behind the tired smears and clichés, you can sense the real fear: he might actually do something.

And this hatred is mixed with Latino race-based triumphalism. For example, Puerto Rican singer Ricky Martin, in a Miami concert before 15,000 fans on October 24, declared in Spanish En este país sin nosotros nadie llega a la Casa Blanca (“In this country, without us Latinos nobody gets to the White House”). The pop star exhorted his Latino audience to estar unidos and no dejar que nadie venga a someternos” (“don’t let anybody come to subject us”) [Ricky Martin: Sin nosotros nadie llega a la Casa Blanca, Excelsior, October 25, 2015]

DAY OF THE DEAD IN THE SERVICE OF OPEN BORDERS

On November 2nd, Día de los Muertos (Day of the Dead) is celebrated in Mexico. Day of the Dead is the Mexican version of the Catholic All Souls’ Day and is, though many Mexicans deny it, historically linked to Halloween.

The Dia de los Muertos is also being used to commemorate the deaths of border-crossing migrants. 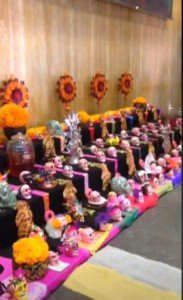 Excelsior reported that the Mexican Foreign Ministry staged its own “ofrenda” or “altar de muertos” (a traditional display honoring the dead) and this one was dedicated “to the memory of disappeared migrant women.”

She [Ruiz Massieu] said that women "carry their children in their shawls, represent the history, hope and aspirations of our people, who are and will be the leaders in a new demographic order, where—in the case of the migration to the United States—Mexicans and other Latinos are the largest minority.”

However much Americans may want to ignore it, Mexican government officials are thinking in terms of imposing a “new demographic order” on the United States.

The deported are a time bomb in Tijuana. On the border, the conditions that provoked the creation of the Maras in Central America are repeated, with the arrival of immigrants with criminal backgrounds. [my translation]

Interestingly, this is essentially a concession that Trump was right and that many of these “migrants” are criminals.

Apparently, it’s ok to complain about them being deported back to Latin America, but not about them coming to the U.S.

When communicating with an English-speaking audience, “Rocky” portrays himself as a problem-solver.

But when he is speaking to Hispanics, he has a far different message. Mexico’s Excelsior writes:

The Hispanic community of the United States now has a candidate to confront the Republican Donald Trump, a businessman of Mexican origin, Roque “Rocky” de la Fuente, candidate to the presidential candidacy for the Democratic Party

The Excelsior article notes that “Rocky” justified his candidacy by “launching a harangue against Trump,” asserting “I am not going to permit that he tread upon the interests of Mexico.”

One at least has to admire his frankness.

A group of 67 intellectuals, artists, scientists, writers and filmmakers of the United States, Latin American and Spain have signed a manifesto which rejects the “discourse of hatred” of Donald Trump

Self-righteously claiming that they “cannot remain silent,” these privileged hacks lecture those of us who actually have to live with the consequences of mass Hispanic immigration into the U.S. that Americans should not be allowed to have an opinion:

Since the announcement of his candidacy, Mr. Trump has accused Mexican immigrants of being criminals, rapists and drug traffickers; and has promised to deport 11 million of them and build a big wall along the border with Mexico. Trump’s hate speech appeals to xenophobia, sexism and political intolerance; it recalls historical campaigns against other ethnic groups that led to millions of deaths. Physical attacks on Hispanics and public assertions that Spanish should not be spoken in public have already occurred.

Nothing about illegal aliens killing Americans, of course.

The common Mexican claim that  the United States “would go to ruin” without Mexicans doing the “manual work” is also repeated. Yet this is coupled with the rather contradictory claim about Hispanic immigrants who contribute “toward greater knowledge, scientific progress, entertainment, and prosperity for all Americans.”

Finally, this arrogant group of foreign interlopers presumes to tell Americans Trump’s conduct is “not worthy of a candidate.” The activists sniff: “All of us condemn his behavior and hope that the American people will no longer tolerate his absurdities.”

Who are these supposed paragons of virtue who have the American people’s welfare at heart?

The group of elitists includes prominent Mexicans who've been at the forefront of the anti-American movement:

There’s doubtless much more we could discover about the agendas of these 67 signers of the manifesto. But it’s obvious they don’t care for the interests of the historic American nation.

In fact, they actively hate it.

And thus their hatred of Donald Trump is revealing.

They oppose him not because they fear he’d be bad for the United States of America. They hate and fear him because they are afraid he’d be good.

Said In Spanish
<< Previous
Next >>
LATEST