[T]hey reviewed the consular protection actions the foreign ministry carries out. The Secretary [Videgaray] reiterated Mexico’s respect for the U.S. legal framework [a tipoff they’re about to meddle] and the importance of the rule of law and due process in migratory issues. He instructed [consuls] to keep our community informed of key issues, such as the recently–approved SB4 law of Texas.

The Foreign Minister and the consular representatives also conversed with organizations expert in civil rights and migratory affairs. He reiterated that the priority for Mexico is to ensure that the rights of Mexicans are respected and that, as has occurred on other occasions, Mexico is ready to take the actions necessary to protect the rights of the fellow Mexicans who reside in the United States.

Wouldn’t it be easier to protect “the rights of Mexicans” if they were back in Mexico?

On the same topic, Excelsior reported:

The promulgation of the SB4 Law…increased the fear and uncertainty among undocumented immigrants and caused changes in the routines of the lives of 1.6 million who reside in Texas, even though the statute…takes effect in September.

This article quotes a 38-year old “undocumented immigrant” by name. She resides in Irving, a Dallas suburb, and laments that when she arrived in 2014, “I went to dances and parties, I was going out and having fun without fear. Now I just leave my house for work and the supermarket… I’m afraid that they will detain and deport me….”

The law even quashed her plans to buy a car. Although she doesn’t even have a driver’s license, she was planning to buy a car by using a matricula consular (a Mexican consular card) as identification and drive without a license. But— “now I know that, if I drive and they stop me, they are going to deport me and it’s not worth it.”

These statements give us insight into how illegals think. In 2014, she had no fear. Now, thanks to the new law, she does.

Excelsior noted how in a “community forum” the mayor and police chief of Houston assured illegals “not to fear” after the invaders “demanded” protection from American law. Isn’t aiding illegals a violation of federal law?

Bottom line: Illegals and the Mexican government are rattled. Resistance is likely to build. Governor Abbott better stick to his guns.

And as all Americans have a stake in this fight, we should support Texas. 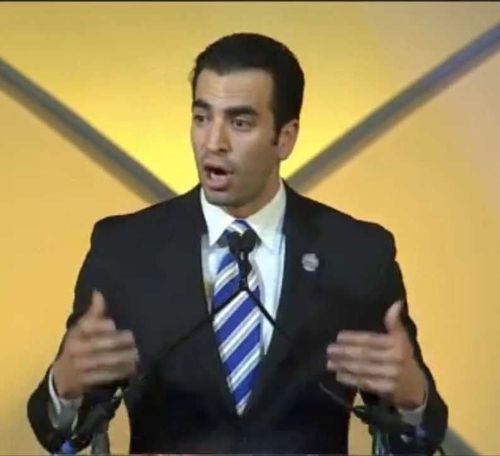 One reason Amnesty is a bad idea is because everyone who benefits is almost certain to demand even more Amnesties and Open Borders in the future. Along with Dominican-American Adriano Espaillat of Harlem, Ruben Kihuen of Nevada is one of two former illegal immigrants now in Congress [New York’s newest Congressman Adriano Espaillat to make history, by Cameron Joseph, New York Daily News, January 3, 2017]. Kihuen is only in our country thanks to President Reagan’s 1986 Amnesty. And now he’s working to make sure no immigration laws will be enforced ever again [Rubén Kihuen, el exindocumentado mexicano que hoy es congresista de EU, “Ruben Kihuen, the Mexican Former “Undocumented” Immigrant who is Now a U.S. Congressman” by Yasmin Mariche, Excelsior, May 23, 2017].

Kihuen was born to a middle-class family in Guadalajara in 1980. Sometime in the mid-1980s, Kihuen’s father moved illegally to the U.S. where he picked strawberries. The elder Kihuen then took advantage of Reagan’s Amnesty and was able to import his wife and four children, including young Ruben.

In any case, Kihuen received his legal status thanks to Reagan’s Amnesty, returned to Mexico in his 20s, and tried to become a professional soccer player. But an injury ended his career, he returned to America and entered politics. Not surprisingly, with such a thin attachment to this country, Kihuen is a fierce Trump opponent and wants free university education, an increase in the minimum wage and some sort of “adjustment to the criminal justice system.” He also has an F- rating from Numbers USA.

Excelsior has featured several gushing stories about Kihuen, including one where he complains about a “DREAMer” being deported [Republicanos rompieron su palabra al tocar a ‘dreamers,’: Ruben Kihuen, by Yasmin Mariche, May 24, 2017].

The Ever-Uniting U.S. And Mexican Governments

The U.S. Constitution (Article I, Section 10) stipulates “No State shall…enter into any Agreement or Compact …with a foreign Power…” But that hasn’t stopped a long line of state officials from dealing directly with Mexico, often to the detriment of American citizens.

The Foreign Minister “emphasized the efforts that our country [Mexico] makes to safeguard the rights and the dignity of the fellow Mexicans in the United States, regardless of their migratory status” (my emphasis—he means illegals) and that “for the government of Mexico it is a priority to maintain a constant and open dialogue with all levels of government of the United States, with the goal of advancing in a joint agenda that increases the competitiveness, the investment, the commerce and the regional integration.”  [Videgaray destaca esfuerzos para salvaguardar los derechos de connacionales en EU, ”Videgaray highlights efforts to safeguard the rights of fellow Mexicans in the U.S, Excelsior, May 3, 2017]

Of course, the more contacts the Mexican officials have with U.S. government institutions, the more meddling leverage they possess. Especially when seemingly no one in our government has a problem with their interference.

Governor McAuliffe did his part as well, and was credited by Excelsior for having “recognized the contributions of the migrants and the policies that contributed to their integration in the communities in which they reside.” 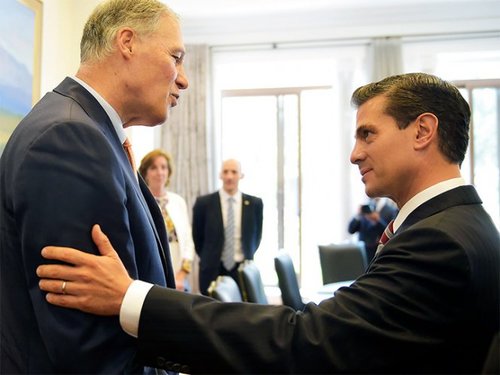 In the official residence of Los Pinos [the Mexican White House] President Enrique Pena Nieto received, separately, the Foreign minister of the Federal Republic of Germany, Sigmar Gabriel, and the Governor of Washington, U.S.A., Jay Inslee.

…the President [of Mexico] received the governor of the state of Washington, Jay Inslee, who headed a commercial mission to Mexico from the 14th to the 19th of May, 2017.

But Germany is a country and Washington is a U.S. state!

According to Excelsior, Pena Nieto “recognized the efforts of [the state of] Washington to be an inclusive state, that recognizes the significant contributions of the Mexican community…” 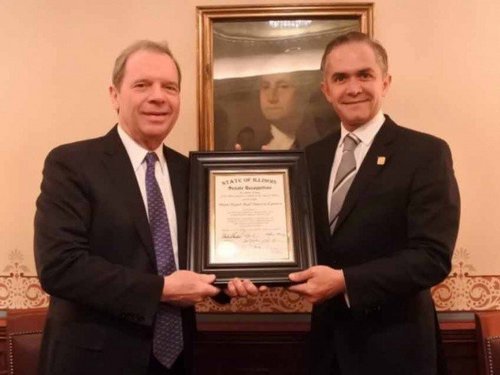 This story is an absolute outrage, and our Illinois readers ought to be raising a ruckus over it.

From the rostrum of the Illinois State Senate, a state where more than two million fellow Mexicans reside, and where he [Mancera] was invited by the president [of the Senate] John J. Cullerton and the legislator Martin Sandoval, Mancera declared that the protection of migrants should be the priority for the Mexican state, as well as for the state and municipal governments.

[En EU reconocen a Mancera por su labor pro migrantes, “Mancera recognized in US for his work for migrants” by Wendy Roa, Excelsior, May 5, 2017]

Here we have a foreign official, invited to speak at an American state legislature, declaring that the Mexican government is going to help “migrants”—illegal aliens—in the U.S.

It is a privilege to be here in this session of the Senate, sharing a discussion with the Senator Martin Sandoval, besides being witnesses to this discussion and initiative and very probably approval of this Trust Law Act, which will permit the Latino Community to have confidence in the police for the particular labors of the care of the people without a link with migratory policy, it would be very good news in case this is approved.

So now we have the Mayor of Mexico City in an American state senate endorsing legislation. Did anybody object to this? Any Republicans?

Mayor Mancera also discussed a helpline managed by the government of Mexico City, “which establishes a system of assistance, 24 hours a day and 365 days a year, so that the fellow Mexicans who feel their integrity menaced by the actions of the Border Patrol can be attended by the Mexican consulates.”

Incredible. Mancera is on U.S. soil, boasting of a phone line to help illegal aliens in the U.S. “menaced” by U.S. law enforcement.

And it gets worse. Mancera also discussed the “Casas Mexico” (“Mexico houses”). These are safe houses on American soil, which, according to Excelsior, are intended to “help the fellow Mexicans who are affected by the anti-immigrant policies implemented by the government of Donald Trump.”

Shame on you, Senate of Illinois. You let a foreign official speak to you, publicly meddle in your legislation, promote foreign lawbreakers and berate our president.

Was Mancera booed and escorted out of the building? Of course not. This meddling foreign official was presented with an award by the Illinois Senate.

[Mancera]… received a recognition for the defense of the migrants and for the policies that he has implemented in the capital of the country [Mexico City] ….

The article shows President Cullerton presenting Mancera with a plaque and Mancera presenting Senator Sandoval with another plaque.

Isn’t this an outrage? Why do people go on and on about supposed Russian influence while they are silent about ongoing public meddling by Mexico?

Even the Trump administration seems totally clueless about this.

The Cannes film festival was recently held in France. The attitudes of the Mexican delegation are revealing about what they tell us about Mexico’s larger feeling towards the United States. All of those listed below work in Hollywood; some even live in the United States. But they all identify as Mexican first:

As you can see in photos of the group, not one looks like a Mexican Indian or even a mestizo. 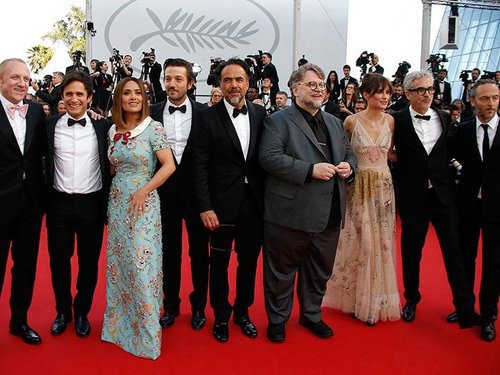 But that’s typical of elite Mexicans.

Most of the delegation is of Spanish descent, Salma Hayek is of Spanish and Lebanese descent, Diego Luna is half-English(!); Luzbeki is of Jewish origin.

The Carne y Arena virtual reality/propaganda experience was located in a hangar on the outskirts of Cannes, in which the floor was covered with sand. Photos and videos were not allowed. Participants had to enter barefoot, whereupon they were presented with a backpack and special glasses. According to the Notimex article: “The glasses locate the spectator among a group of immigrants wandering in the desert that separates Mexico from the United States, who are suddenly discovered by a border patrol.” 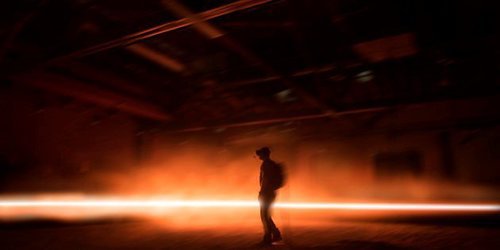 The virtual reality experience lasts six and a half minutes and utilizes 3-D, a 360 degree view and CGI.

In an interview with Notimex, Gonzalez Inarritu said:

How sad that such a real and painful reality has had to be interpreted in a virtual manner to be relevant. The reality is not good enough for us. The quantity of information about these persons now does not generate any interest. If I would have filmed a ten-minute short film nobody would have come, ten people would have seen it.

What planet is Gonzalez Inarritu living on? People talk about illegal aliens all the time. He certainly does.

Inarritu claimed his “experiment” was in the “service of humanity.”

More like the service of cheap labor—and cheap votes.

Carne y Arena is scheduled eventually to make its way to Mexico City and Los Angeles.