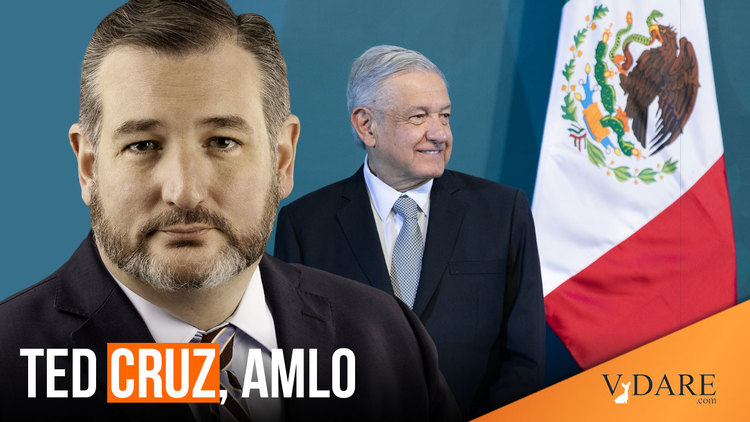 SAID IN SPANISH: Mexicans Moan That Sen. Ted Cruz Threatens Their Sovereignty—I.E., Their Right To Dump Their Poor On Us

During a hearing of the Senate Foreign Relations Committee, Cruz was indeed critical of the Mexican president.

The accelerating breakdown of Mexican institutions and the rule of law under López Obrador is a threat to US national security.

Today, I pressed the Administration on the need to do more to stop and reverse this deadly trend. pic.twitter.com/h1ZAiNUB7c

Cruz, above,  is concerned about “deepening civil unrest in Mexico,” the “breakdown of civil society,” and “the breakdown of the rule of law across our southern border.” The “current climate faced by politicians and journalists in Mexico is the deadliest ever,” he said, because reporters and politicians are assassinated.

AMLO is “making all these trends worse,” Cruz said, observing that AMLO intimidated a prominent journalist, Carlos Loret de Mola, during a press conference by calling for an investigation into his work.

What steps is the Biden administration taking to convey to the Mexican government that their behavior is undermining the rule of law and that is in turn endangering American security and the U.S. -Mexico relationship?

Those are legitimate and important questions, certainly more pressing to our country than the Ukraine/Russia conflict.

Cruz’s comments ruffled AMLO’s feathers, who punched back by complaining that Cruz meddled in Mexican affairs. Never mind that AMLO himself recently meddled in our affairs by declaring that Mexican-Americans shouldn’t support a party that opposes Amnesty for illegals.

In covering the story, the Associated Press evaded the point. It focused on a letter to Cruz from Mexican Ambassador Esteban Moctezuma saying that Cruz shouldn’t lecture Mexico on the rule of law because some Republicans challenged Biden’s victory over POTUS 45 Trump in 2020 [Mexico to Sen. Cruz: At least our candidates accept defeat, February 18, 2022].

Without exception, all of the political parties accepted the results and got on with the task of strengthening our democracy and freedom of expression.

Again, that’s rich. AMLO did not “accept defeat” in the 2006 Mexican presidential election, but he has always claimed he was robbed. Significantly, he refused to congratulate Sleepy Joe until the 2020 election results were finalized.

AMLO discussed Cruz during his daily news conference, held at Ciudad Juarez on the border. A reporter tossed a softball loaded with an invitation to slap Cruz: he’s “not exactly a friend of Mexico,” the reporter said.

AMLO swung for the fences:

Well, it’s natural that this senator from Texas, who does not agree with us, expresses himself as he does. He is against the policy we are carrying out, in favor of the people of Mexico and in defense of the Mexicans who work and live honorably in the United States. Therefore, it is to be expected. … What is the senator’s name?

AMLO repeated the name "Ted Cruz" then launched into a rant about Mexican history, caricaturing it as struggle between the evil conservatives and the good liberals:

And now it is clear what the two positions are, as the history of Mexico has always been and as I would say, the history of the political world: the liberal movement and the conservative movement.

So it seems AMLO does not object to communism, at least sometimes.

Then he returned to Cruz, expressing pride that Cruz attacked him:

Therefore, now it’s a time of transformation, because, the truth, it is a kind of pride that a senator like this person attacks the government that I represent. It fills me with pride, for what it represents, that is, for what we represent.

If he would praise me, if he would speak well of me, maybe it would make me think that we are not doing things well. But if he says that we are bad, the truth is it gives me pride.

Yesterday, I saw a declaration of a Republican, of Ted Cruz, and to me it seems that it is inadmissible his affirmations, because regardless of our problems, the Republican legislator of the United States should have more prudence about our internal affairs, because his position is not permissible. It assaults our internal politics, our sovereignty.

Then came the demand that Cruz back illegal aliens. “What he should have done was to promote and use all his energy to defend the civil rights of the migrants,” Monreal said. “It is truly severe and sad what is happening.”

But shouldn’t Ted Cruz “use all his energy to defend the civil rights” of Americans, and Texans in particular?

Monreal is right about one thing, albeit for the wrong reason: “It is truly severe and sad what is happening,” as he said—but to America. The Biden Border Rush is abolishing our sovereignty. Biden is orchestrating a mass invasion to dispossess the Historic American Nation.

Of course, Monreal doesn’t see it that way. “A great part of our fellow Mexicans and their rights are violated in a continual manner in that country,” he added.

But they’re welcome to leave anytime if this country’s permitting them to jump the border, stay here, and do what they want violates their rights…not ours.

“It worries me,” Monreal continued. “I know the United States well.”

It's very common for Mexicans to regard themselves as experts on the United States.

Nor is that uncommon, as the majority of Mexicans have relatives in the United States.

The black chapters of xenophobia and discrimination and racial persecution are flaring up and reviving. That is what should worry Ted.

Sounds good to me. I say we start by not allowing Mexico to interfere in U.S. internal affairs.

Now, what does this obsession with Cruz tell us about Mexico’s ruling class?

Naturally, Biden will do nothing about what Cruz correctly called “the breakdown of the rule of law across our southern border” because the Great Replacement is a key part of his administration’s agenda. He wants to import millions of Democrat voters to replace the Historic American Nation.

But midterms are coming up.

If Republicans win Congress, they must immediately impeach Biden, specifically for aiding and abetting the Border Rush.

Then they must do whatever is necessary to stop it.

That would really give Mexican leaders something to bellyache about!