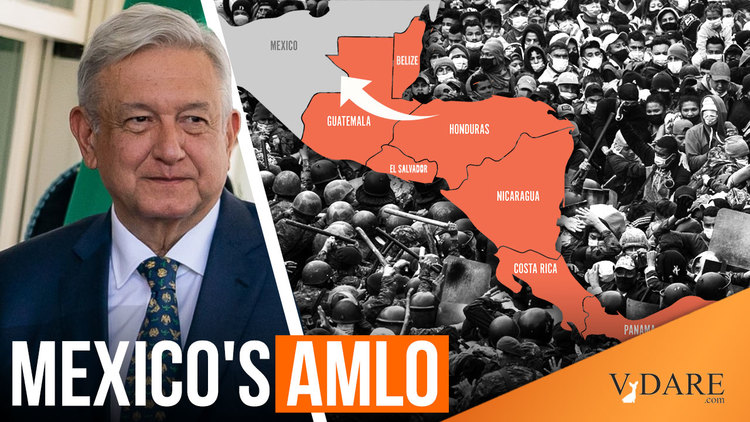 Back in 2018 I wrote that I suspected that Mexican president Andres Manuel Lopez Obrador (“AMLO”) might get along with Trump.  They actually did get along quite well.   And AMLO  cooperated with Trump on reducing Central American illegal immigration and on the Remain in Mexico policy, which required “migrants” to stay in Mexico while their asylum cases are processed.

AMLO also recognized that the 2020 election was questionable and refused to congratulate Biden until his victory was official. And he criticized Big Tech’s censorship of Donald Trump. That puts him way ahead of many Americans.

But the Biden Era has now begun. So AMLO is now gung-ho for Sleepy Joe.

Well, we are very much in agreement that they cancel the construction of the wall. This is a subject that we celebrate because the wall has been under construction for some time. To be very objective, Democrat presidents, as much as Republican presidents, have constructed their sections of the wall … and now President Biden decides that now he is not going to construct a wall on the border.

AMLO gave a detailed history of border barrier construction under Clinton, Bush, Obama, and Trump, but concluded that Biden’s immediate cancellation “is a very good decision.”

And Amnesty? That’s another good idea—hardly a surprising position for a Mexican president:

As for ending Remain in Mexico, AMLO likes that too. “We have in Mexico around 6,000 migrants waiting for their cases to be resolved. Yes, it would be convenient … that they wait in U.S. territory,” he said.

AMLO counseled caution on the part of Latin Americans who might think they will enter the United States immediately because “it’s going to take time to apply the new migratory policy.”

Indeed, just the day before, AMLO said Biden himself delivered that message:

It’s thought that the gates are now open, and that the Biden government is going to immediately regularize all the migrants. But I have the obligation to tell them that … they have very good intentions, and I celebrate it, but President Biden himself has informed me that it’s going to take some time to define his migratory policy. … Therefore, everybody can’t just go right now to the United States and be regularized. … You can’t … modify the migratory policy overnight.

That message is likely to fall on deaf ears. The “migrants” are ready for free stuff now!

In February 12 press conference, AMLO also mentioned two issues that according to him need to be resolved:

AMLO, of course, thinks that requires U.S. taxpayer subsidies to Central America, which he has long supported.

In other words, like the U.S. Cheap Labor lobby, AMLO thinks that we need migrants to do the “jobs Americans won’t do,” and that we must issue legal work visas for them.

More good news surfaced in a recent report from Reuters:

Biden has been gradually unraveling many Trump-era immigration policies. Yet the new administration has encouraged Mexico and Guatemala to keep up border enforcement in their countries to stem northward migration, according to two Mexican officials and a U.S official, all speaking on condition of anonymity. …

The Mexican government has informed the new U.S. administration that it intends to keep current immigration enforcement measures in place because it is in Mexico’s sovereign interest to secure its own borders, one senior Mexican official said, speaking on condition of anonymity.

Every illegal stopped by Mexico and sent home is one who  hasn’t entered the United States. And it’s particularly good news that Mexico thinks this is in its own interest.

And Guatemala Worried About Honduran Caravans

In Guatemala itself, personnel from the immigration department, the national civil police, and the defense, intelligence and health departments recently met to discuss plans to handle the next illegal-alien caravan from Honduras. The Honduran caravans, of course, must pass through Guatemala to reach Mexico and the U.S. border.

But here’s the problem for the caravan, the EFE news service reported:

[A]ccording to the regional accord CA-4, passage to Guatemala is permitted to Salvadorans, Nicaraguans and Hondurans with an identity document or current passport, but besides all travelers must present a negative proof of COVID-19.

In the waning days of the Trump administration, a caravan from Honduras entered Guatemala, but Guatemalan security forces broke it up. What about the next one?

Well, in that meeting, the government leaders said they will not permit unqualified “migrants” to cross the border.

Let’s hope they stick with that.

You may have read of the recent truck tanker truck in Texas crammed with illegal aliens.

The Mexican foreign ministry offered this:

The vast Mexican consular network in Texas is prepared to offer all assistance and consular protection necessary in case it is required.

The  11 consulates in Texas are located in Austin, Brownsville, Del Rio, El Paso, Eagle Pass, Dallas, Houston, McAllen, Presidio, Laredo and San Antonio.  And 7 of the 11 are located in border towns!

These consulates can do a lot of meddling if they want to.