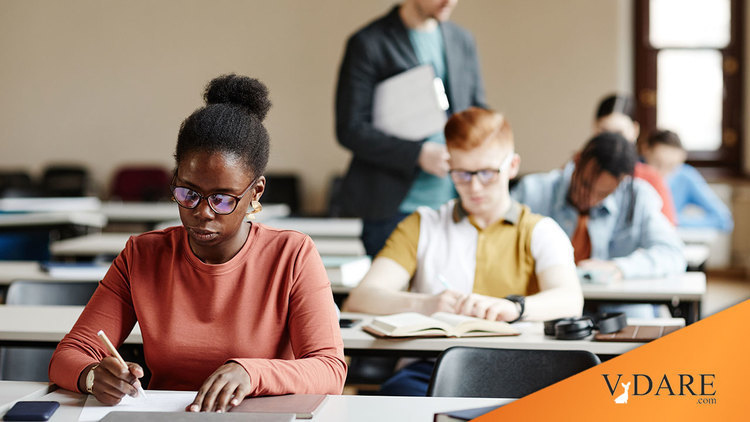 The black-white achievement gap continues to baffle America's best minds. Just this week we are being treated to the "Achievement Gap Summit," a conference in Sacramento, California. It will draw no fewer than 4,000 uplift experts to no fewer than 125 panels.  [Summit called to address racial disparities in academic performance , By Nanette Asimov, San Francisco Chronicle, November 12, 2007]

One of the organizers is Jack O'Connell, California's top bureaucrat for schools. He has announced the bold discovery that lagging black and Hispanic test scores are not caused by poverty alone. The racial gaps in achievement are even greater for middle-class and wealthy children than for poor children, he has found. So, he says, something else must be going on.

Mr. O'Connell has decided the culprit is "cultural ignorance" in the schools. For example, he explains, blacks learn to clap and chant in church, and don't realize they are not supposed to do this in school. And so they get bad grades.

Mr. O'Connell has gone through hours of sensitivity training to learn this. He wants every teacher in California to do the same.

One thing he's sure about: The problem is "absolutely, positively not genetic." [Email Jack O'Connell]

Likewise this week, newspapers reported on a Pew Charitable Trust study [Economic Mobility of Black and White Families] that found blacks are three times more likely than whites to drop out of the middle class into the lowest fifth of income earners. [Middle-Class Dream Eludes African American Families, By Michael A. Fletcher, Washington Post, November 13, 2007]

More specifically, 45 percent of black children whose parents were earning the 1968 median income grew up to be poor. Only 16 percent of white children from similar families hit the skids.

Columbia sociologist Ronald B. Mincy, [send him mail] who was an advisor to the Pew study, says they went over the results again and again to make sure they were right. "There is a lot of downward mobility among African Americans," he told the Washington Post. "We don't have an explanation."

Well, I am not handicapped by a professorship at Columbia. So I do have an explanation—and Jack O'Connell and the Achievement Gap crowd ought to listen up, too.

Ever since IQ tests have been given in the US, the black average has been 85—a full 15 points below the white average.

There is a lot of overlap, of course, and some blacks are smarter than most whites. But while 50 percent of whites have IQs over 100, only 16 percent of blacks do. Likewise, whites are 20 times more likely than blacks to have IQs of 130 or higher.

One of the best-established facts in the social sciences—and something that is obvious to everyone—is that people with high IQs tend to do better in school and better in life than people with low IQs.

Clapping and chanting in church has nothing to do with it.

The evidence that racial differences in IQ are at least partly genetic is overwhelming, despite the outraged shrieks that greet anyone who points this out. (As the James Watson affair shows, the shrieks have become so hysterical we can be sure the guardians of orthodoxy are less sure of their position than ever.)

There is something else the hand-wringers should think about: regression to the mean, or the tendency for natural phenomena to draw back from extremes towards the average.

When very tall people have children, for example, they don't keep getting taller and taller, generation after generation. The children are likely to be taller than average—but not as tall as their parents.

The process works in the other direction, too: Very short people don't keep having even shorter children; the generations drift up towards the average.

The same goes for intelligence. Francis Galton noted in the 1860s that geniuses' children are smart, but they usually aren't geniuses. Likewise, dummies tend to have children smarter than themselves.

Regression is only a tendency, however. Occasionally parents at the extremes produce children who are even more extreme. But that is rare. The more extreme the parents are, the stronger the pullback towards the mean.

The people who agonize over the achievement gap would rather cover their ears than hear this—but regression explains what baffles both Mr. O'Connell in California and Prof. Mincy of Columbia. It explains both why the black-white (and Hispanic-Asian) achievement gap is greater at higher income levels, and why blacks are more likely to fall out of the middle class than whites.

Among blacks, IQ regresses to a mean of 85 rather than 100. So a black who has a high enough IQ to be comfortably middle class—say 120—is much further out toward the IQ extreme for his group than a white with an IQ of 120. Which means the pull towards the mean is much more powerful for the children of smart blacks than it is for the children of equally smart whites.

Put differently, if you match black parents and white parents for IQ, the black-white IQ gap for the children increases sharply as the parents' IQs go up.

And that, Mr. O'Connell, is why the black-white test score gap is greater for the children of rich parents than it is for poor parents. It may be a rotten shame, but it is just plain harder for middle-class blacks than for whites to pass on their intelligence—and therefore their social status—to their children.

In his book, The g Factor,

[Page 471] Arthur Jensen gives a striking example of regression to the mean. He collected the IQ scores of all the elementary school students in one California school district. He then picked out all the students—both black and white—with IQs of 120, a score well above the white mean but even further above the black mean. He found that the average IQ scores for the brothers and sisters of these children was 113 for the white children and 99 for the blacks.

It was to be expected that siblings have lower IQs than the hotshots. But these figures show just how much more freakish it is for black than white children to have IQs of 120. These very smart blacks were, on average, 21 points ahead of their brothers and sisters; the whites were only seven points ahead.

And there is something else going on that the uplift crowd refuses to hear: Blacks have disadvantages entirely apart from IQ. As Charles Murray and Richard Herrnstein note in the their book The Bell Curve

This probably has to do with greater impulsiveness, or a lower willingness to sacrifice in the present for gains in the future. A classic 1961 study found that black children are much more likely than white children to ask for a small candy bar today than wait a week for a bigger one. (W. Mischel, "Preference for Delayed Reinforcement and Social Responsibility," Journal of Abnormal and Social Psychology 62, 1: 1-7.)

And I can promise you that not one of the 125 panels at the Achievement Gap Summit will talk about it.

Adlai Stevenson once said that given a choice between agreeable fantasy and disagreeable fact, Americans will go for the fantasy every time. The fantasy these days is that racial differences are (in California educrat O'Connell's words) "absolutely, positively not genetic."

Until people such as Arthur Jensen and Richard Lynn and Charles Murray are on the achievement gap panels and are advising the Pew Charitable Trust, people who ought to know better will keep on finding they "don't have an explanation" for simple problems.

Jared Taylor (email him) is editor of American Renaissance and the author of Paved With Good Intentions: The Failure of Race Relations in Contemporary America. (For Peter Brimelow's review, click here.) He reports that the next American Renaissance conference will be held February 22-24, 2008 in Herndon, VA.