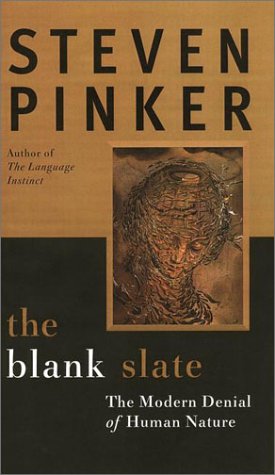 The Blank Slate: The Modern Denial of Human Nature, the bestseller by MIT cognitive scientist Steven Pinker, is one of the landmark reading pleasures of the year. With a style that's both magisterial and entertaining, Pinker smacks around the dominant bad idea of the 20th Century: that all divergences from equality must be the fault of the social environment.

In the name of equality and social engineering, Lenin, Stalin, Mao, and Pol Pot murdered tens of millions. And milder forms of this madness survive in the West today. (See, for example, my recent articles on the truth-telling teacher or William McGowan's book Coloring the News: How Crusading for Diversity Has Corrupted American Journalism.)

When I interviewed Pinker, I asked him:

Sailer: Aren't we all better off if people believe that we are not constrained by our biology and so can achieve any future we choose?

Pinker: People are surely better off with the truth. Oddly enough, everyone agrees with this when it comes to the arts. Sophisticated people sneer at feel-good comedies and saccharine romances in which everyone lives happily ever after. But when it comes to science, these same people say, "Give us schmaltz!" They expect the science of human beings to be a source of emotional uplift and inspirational sermonizing.

Reading The Blank Slate is particularly enjoyable to me because Pinker and I are so much on the same wavelength. We even have similar expansive concepts of evidence, relying not just on refereed journals but also on Tom Wolfe, Dave Barry, and the great Calvin and Hobbes comic strip.

Further, Pinker is an enthusiastic subscriber to my iSteve mailing list. And arguments that I've made over the years pop up throughout The Blank Slate.

For example, according to Pinker, his section on IQ on pp. 149-150 embellishes upon various of my articles. My VDARE series on how to help the left half of the bell curve was apparently a particularly fruitful source. Here's an excerpt from The Blank Slate with links to my supporting articles:

"I find it truly surreal to read academics denying the existence of intelligence. Academics are obsessed with intelligence. They discuss it endlessly in considering student admissions, in hiring faculty and staff, and especially in their gossip about one another. Nor can citizens or policymakers ignore the concept, regardless of their politics. People who say that IQ is meaningless will quickly invoke it when the discussion turns to executing a murderer with an IQ of 64, removing lead paint that lowers a child's IQ by five points, or the Presidential qualifications of George W. Bush."

Several readers have complained that while The Blank Slate is excellent on sex and individual differences, it wimps out on racial differences. My response: "Thank God." Pinker is not only a major scientist, while I'm merely a journalist, but he's also much more articulate. If he had written a book about race, there would be nothing for me to say.

Further, it's important to realize how far Pinker has come over the years. He started out completely under the spell of Leda Cosmides and John Tooby, the founders of evolutionary psychology, which has succeeded on politically-correct campuses by stripping from Edward O. Wilson's discipline of sociobiology its emphasis on explaining human differences.

I've given Pinker a hard time over the years for this curious sentence in the conclusion of his first big book for a general audience, 1994's The Language Instinct:

"… to a scientist interested in how complex biological systems work, differences between individuals are so boring!"

Clearly, this was wrong even in a technical sense. Scientists figuring out how the brain works have made much of their progress by comparing healthy individuals to, say, individuals who survived tragic accidents in which nine inch nails were driven through particular parts of their brains.

But the quote also catches the self-defeating ideological limitations that evolutionary psychology imposes upon itself to avoid political persecution. After all, we humans don't find individual differences boring at all. To us, they are quite possibly the juiciest subject in the universe.

How the Mind Works, was much less dogmatic. But it was still stuck in the tradition of Wilhelm Wundt, the founder of "experimental psychology," which also focuses on similarities. Pinker largely ignored differential psychology, founded by Charles Darwin's smarter half-cousin Francis Galton.

In The Blank Slate, though, Pinker is much closer to synthesizing the two warring, but complementary, traditions.

On the subject of race, Pinker has progressed dramatically in just the last year. As recently as 2001, he told Skeptic magazine -

"If our society did not divide people by race then the question of racial differences would be too scientifically boring for anyone to bother with. Races are biologically superficial, and they tie in to no real theory of how we evolved, so there is no coherent explanation as to why races should differ biologically."

This assertion that hereditary groups "tie in to no real theory of how we evolved" would have come as quite a surprise to Charles Darwin. After all, he entitled his big book On the Origin of Species by Means of Natural Selection, Or the Preservation of Favoured Races in the Struggle for Life.

This is not a minor quibble: without inherited racial variation, there could be no evolutionary process. All of Pinker's theories of how evolution affected humanity would have no foundation to stand upon.

Now, however, in The Blank Slate, Pinker's definition of race has vastly improved (p. 144):

Nowadays it is popular to say that races do not exist but are purely social constructions. Though that is certainly true of bureaucratic pigeonholes such as "colored," "Hispanic," "Asian/Pacific Islander," and the one-drop rule for being "black," it is an overstatement when it comes to human differences in general. The biological anthropologist Vincent Sarich points out that a race is just a very large and partly inbred family. Some racial distinctions thus may have a degree of biological reality, even though they are not exact boundaries between fixed categories. Humans, having recently evolved from a single founder population, are all related, but Europeans, having mostly bred with other Europeans for millennia, are on average more closely related to other Europeans than they are to Africans or Asians, and vice versa. Because oceans, deserts, and mountain ranges have prevented people from choosing mates at random in the past, the large inbred families we call races are still discernible, each with a somewhat different distribution of gene frequencies. In theory, some of the varying genes could affect personality or intelligence (though any such differences would at most apply to averages, with vast overlap between the group members). This is not to say that such genetic differences are expected or that we have evidence for them, only that they are biologically possible.

(Ahem! The formulation "a race is just a very large and partly inbred family" does not, in fact, come from my friend Vince Sarich, Berkeley professor emeritus and one of the founders of genetic anthropology. As far as I can confirm from Google searches, I myself introduced it in 1998 and continually polished it up through last summer's summation in VDARE.COM "It's All Relative: Putting Race in Its Proper Perspective.")

That's a perfectly valid scientific hypothesis–one that, unlike his earlier dogmatic dismissal of race, can be tested.

So let's test it. As Pinker says: "People are surely better off with the truth."

The American Conservative. His website www.iSteve.blogspot.com features his daily blog.]