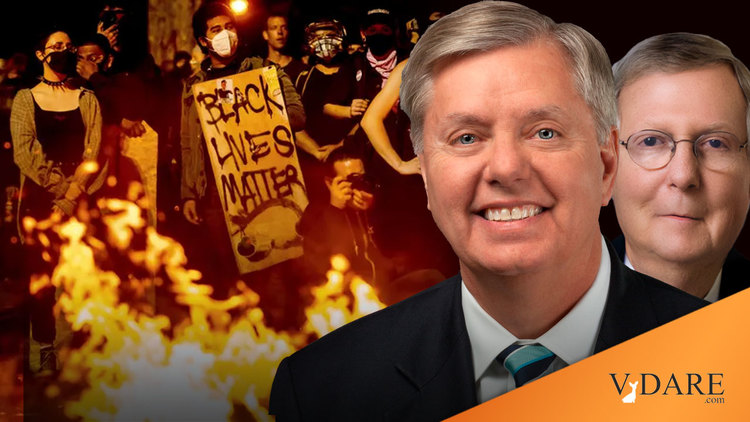 Patrick J. Buchanan: Will The Radical Left Reunite The GOP?

"Our historic, patriotic and beautiful movement to Make America Great Again has only just begun." So said Citizen Trump Saturday on his acquittal by the Senate of the impeachment article of "incitement of insurrection" in the Jan 6. invasion of the Capitol.

"I look forward to continuing our incredible journey together to achieve American greatness for all our people," said Trump. "We have so much work ahead of us, and soon we will emerge with a vision for a bright, radiant and limitless American future."

The new Senate minority leader, Mitch McConnell, has another view.

While he had voted to acquit Trump because he saw the Senate as acting outside the Constitution in prosecuting a former president, now a private citizen, he was unequivocal about the validity of the charge.

Trump is guilty, said McConnell: "There's no question, none, that President Trump is practically and morally responsible for provoking the events of (Jan. 6)."

"The people who stormed this building believed they were acting on the wishes and instructions of their president. And having that belief was a foreseeable consequence of the growing crescendo of false statements, conspiracy theories and reckless hyperbole which the defeated president kept shouting into the largest megaphone on planet Earth."

Nor had then-President Trump done his duty to stop the rioting by his followers: "He did not do his job. He did not take steps so federal law could be faithfully executed and order restored."

McConnell was saying that Trump not only was guilty of the charge of incitement but also has disqualified himself as leader of the Republican Party, and the party should wash its hands of the former president.

If it's Trump's Party now, McConnell was saying, he is seceding.

Nikki Haley, whom Trump honored by naming her U.S. ambassador to the United Nations, in an interview published Friday, told Politico that Trump, "let us down. ... We shouldn't have followed him, and we shouldn't have listened to him. And we can't let that ever happen again."

Haley, too, has belatedly washed her hands of her benefactor.

But Sen. Lindsey Graham called McConnell's remark a burden for the party to bear in 2022 and Trump the still-indispensable leader:

Who is the future party leader? Who comes after Trump?

The succession struggle in the GOP is now underway. But as for now, Donald Trump is The Man, and he is not going anywhere.

As former president and most recent nominee, he is the party's titular leader. He won the largest total of popular votes in party history, 74 million. He intends to raise millions and campaign in 2022 in states where he is wanted—and in states where he may not be wanted.

And he will likely set the issues agenda, as a media obsessed with Trump will elevate everything he says, if only to denounce it.

Yet, Trump's immediate future is likely to see a blizzard of subpoenas from litigants and prosecutors that will take a toll of his time and resources.

Still, even if Trump cannot unite the Republican Party, he brings, far and away, the largest pile of chips to the table.

That House Republicans voted 19–1 against impeachment and Senate Republicans voted 6–1 against conviction testifies to the breadth and depth of his support. As for the Never-Trumpers, John Weaver seems to have done for the Lincoln Project what John Wilkes Booth did for Ford's Theater.

What can reunite a party as divided as it hasn't been since the Barry Goldwater–Nelson Rockefeller battle of 1964?

The Democrats can; the left can; the establishment can; the media can; the cancel-cultural elite can–all of whom are disliked or detested by Republicans. Its enemies can reunite the Republican Party.

The Biden crowd has already killed the Keystone XL pipeline and put federal lands off-limits to future drilling, imperiling the energy independence the GOP had achieved under Trump.

The open-borders crowd, which seeks to swamp Middle America with millions of new migrants, is seeking to emasculate U.S. Immigration and Customs Enforcement, end deportations and tear down the Trump wall.

Democratic Gov. Gavin Newsom of California is in danger of being recalled and fired, and Democratic Gov. Andrew Cuomo of New York may be charged with misleading federal authorities about how many New Yorkers died in nursing homes because he assigned COVID-19 positive patients into rooms alongside them.

While the invasion of the Capitol was the most publicized act of mob violence in decades, it was not the most violent, nor is it the norm.

When antifa, Black Lives Matter and leftist allies smashed statues, looted and torched inner cities and attacked cops in 2020, that was the norm. And the street criminals who compiled those new records of shootings and killings last year in almost all of our cities, they were not Oath Keepers or Proud Boys.