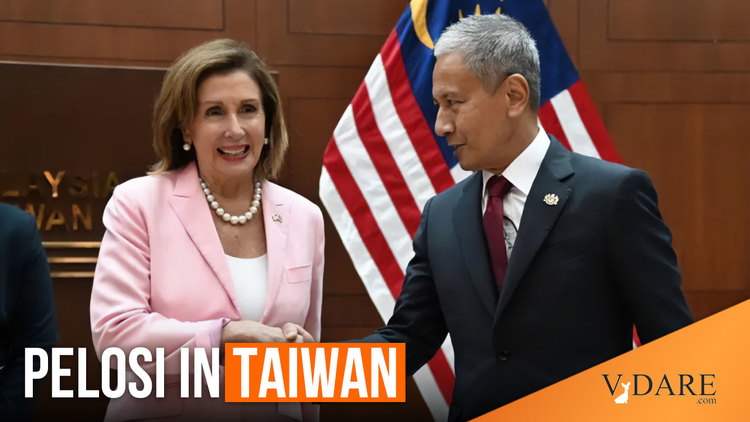 When House Speaker Nancy Pelosi defied White House signals that she not stop in Taiwan on her valedictory tour of Asian capitals, she ignited the worst diplomatic U.S.-China row in decades.

And how did last week‘s collision turn out for the United States?

Speaker Pelosi‘s trip to Taiwan began with her ”plane departing from Kuala Lumpur and heading southeast toward the Indonesian part of Borneo, then turning north to fly along the eastern part of the Philippines. A more direct—and shorter—route would have been to fly northeast in a direct route over the South China Sea to Taiwan.”

Pelosi‘s avoidance of the South China Sea might have something to do with China’s claim to 90% of it and China‘s control of islets in that sea that Beijing has converted into air, missile and naval bases.

After 19 hours in Taiwan, the speaker flew to South Korea, where her reception was described as ”cool.” President Yoon Suk Yeol, though at home in Seoul when Pelosi arrived, did not meet with her, but instead held a 40-minute phone conversation.

South Korea, like its neighbors, is anxious not to offend China.

South Korea, Japan, Taiwan, Australia and New Zealand all rely on the United States as their No. 1 ally in defending them against China, but all boast of China as their No. 1 trading partner.

How did Beijing react to Pelosi‘s 19 hours in Taiwan?

The effect of these live firings at and around Taiwan was that of a naval quarantine or blockade. Ships and planes of other nations avoided air corridors and waters being targeted by Chinese forces.

China also announced diplomatic and economic sanctions against the U.S. and Taiwan, canceling talks with Washington on climate change and military relations.

Pelosi‘s visit to Taiwan was the triggering event that ignited the Chinese war games against Taiwan. But these air, naval and missile exercises were not planned in a day. They appear to have been prepared as a dress rehearsal for how China intends to go about bringing Taiwan home to the motherland, when President Xi Jinping decides the time is right.

Pelosi spent the rest of her trip insisting that her visit represented no change in U.S. policy on Taiwan.

Speaking to reporters in Tokyo, Pelosi reiterated, ”Our representation here is not about changing the status quo,” adding that Beijing is ”probably using our visit as an excuse.”

As the live firing went on for 72 hours, the White House echoed Pelosi that the U.S. recognizes Beijing‘s claim that Taiwan is a ”part of China” and does not contest that claim. Nor have we any intention of shifting U.S. policy on Taiwan as it has been pursued since Jimmy Carter broke U.S. diplomatic relations with Taiwan in 1979.

Where was the U.S. aircraft carrier Ronald Reagan, then on Asian assignment during all this? Cruising in the Philippine Sea, not the South China Sea or Taiwan Strait or East China Sea, all claimed by Beijing.

What was the message sent and the message received from the war games with which China responded to Pelosi‘s visit to Taiwan?

From Beijing, the message sent to the U.S. was clear.

China regards Taiwan as its detached province. It will confront any power, including the United States, that is perceived to be challenging that political reality. It will respond to any Taiwanese move to establish its independence of Beijing as a casus belli, a justification for war.

The White House did not move any planes, ships or missiles to counter the Chinese live-fire exercises and, indeed, reassured Beijing repeatedly that Pelosi‘s visit did not represent any change in U.S. policy.

It is hard to see how Asia‘s free and democratic nations and U.S. allies Japan, South Korea and Australia could not have taken away the conclusion that bristling Chinese aggressiveness had just been met by American passivity. Hawkish members of the Senate like Lindsey Graham appear to believe that.

It has attacked and captured border lands in the Himalayas from India, claimed virtually the entire South China Sea, fortified half a dozen isles in that sea, claimed the Taiwan Strait as territorial waters, the transit of which by U.S. and allied warships requires China‘s permission, claimed Taiwan as part of China, as well as the nearby Senkaku Islands held by Japan.

Now it has sent military aircraft and warships across the Taiwan Strait into and over the waters surrounding Taiwan and test-fired missiles and rockets to reenforce its claim to the island.

When 21st-century China stakes a claim to something in Asia, it backs up its claim with action. The trend is unmistakable and points to a future confrontation over Taiwan.

Patrick J. Buchanan needs no introduction to VDARE.COM readers; his books State of Emergency: The Third World Invasion and Conquest of America, and Suicide of a Superpower: Will America Survive to 2025? are available from Amazon.com. Patrick J. Buchanan is the author of “The Greatest Comeback: How Richard Nixon Rose From Defeat to Create the New Majority.“