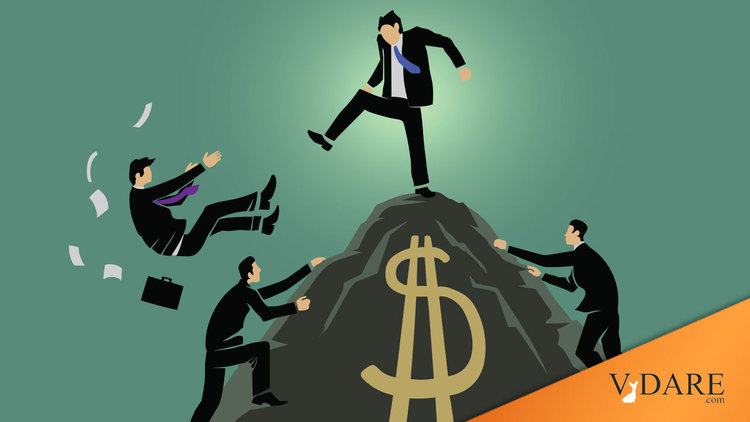 Patrick J. Buchanan: Where Did All Those "Capitalist Pigs" Go?

"There are few ways in which a man can be more innocently employed than in getting money," is an insight the famed biographer James Boswell attributed to Samuel Johnson.

Clients of the late Bernie Madoff, however, might take issue.

Over four decades, Madoff, acclaimed as the greatest fraudster of them all, ran a Ponzi scheme that swindled 40,000 people, including his closest friends, out of $65 billion.

But if "getting money" is among the most innocent of callings, America has more than its fair share of the goodly people who excel at it.

According to Forbes's 35th annual ranking of billionaires, last year witnessed a population explosion. Some 660 new billionaires were added to the number for a total of 2,755.

And more than one in every four billionaires is an American.

According to Forbes, the richest man in the world is Jeff Bezos, founder of Amazon and owner of the Washington Post, with $177 billion.

Last year was the fourth in a row that Bezos led the list. His wealth exceeds the entire GDP of almost 150 nations.

Directly behind Bezos, at No. 2, is Elon Musk, chief executive of Tesla, whose wealth rose to $151 billion.

Numbers 4 and 5 were Bill Gates, co-founder of Microsoft, with $124 billion, and Mark Zuckerberg of Facebook with $97 billion.

"As a class billionaires added about $8 trillion to their total net worth from last year, totaling $13.1 trillion," says the Washington Post.

"The United States had the most billionaires, at 724, extending a rapid rise in wealth that hasn't happened since the Rockefellers and the Carnegies roughly a century ago. China, including Macau and Hong Kong, had the second highest number of billionaires: 698."

This tripling of the wealth of the world's billionaires and 30% increase in their number came during a year when America and the West endured the worst pandemic in a century and worst economic collapse since the Great Depression.

"While most of the world's wealthiest people prospered during the pandemic, thanks in part to stock prices," writes the Post, "millions of Americans grappled with job loss, food insecurity, debt, eviction and poverty."

Query: where was the outrage?

In previous times like these, where the rich got richer and the poor and working class rode the rails, we would have heard the excoriations of economic populists and echoes of TR's "malefactors of great wealth" and FDR's "forces of entrenched greed."

But Forbes' report of the population explosion among billionaires in 2020 passed seemingly without protest.

The dogs did not bark. Why not?

One reason: whatever one may think of Bezos, Amazon, in 2020, was indispensable for delivering food and medicines to tens of millions of Americans who, given the "lockdowns," depended on such deliveries for survival. You don't castigate people providing your food and medicine.

Also, today's billionaires' boys club has come to understand how to make its astonishing wealth acceptable, by ingratiating themselves with their old ideological enemies.

Set up a tax-exempt foundation, fund it with billions of dollars, invite in liberals to sit on the board, and, at munificent salaries, to run it and distribute its income to liberal causes. The way to diminish leftist resentment at huge piles of private wealth is to give them a cut.

However they did it, America's most successful capitalists have learned the lesson some previous generations of capitalists did not—how to preserve their wealth, privilege and economic power and avoid such derisive terms as "capitalist pig."

Yet, of greater interest, and import, is that the China of the new Great Helmsman, Xi Jinping, a one-party Communist dictatorship, coexists with hundreds of Chinese billionaires.

What would Marx, Lenin, Stalin or the Mao of the Revolution that triumphed in 1949, who put his country through the Great Proletarian Cultural Revolution of the 1960s and 1970s, say of Chinese oligarchs and plutocrats, each of whom possessed at least a billion dollars in wealth?

But today, there are inequalities of wealth between the working poor and middle class, and the well-to-do and rich, that would have been anathema to the revolutionaries who founded Communist China.

Is China running a capitalist economy to generate the wealth to consolidate Communist Party control of the nation and grow China's economic, military and geostrategic power until China displaces America as the first power on earth? So it would appear.

One wonders: Has China found the formula for global ascendancy that eluded the Soviet Union of Stalin, Khrushchev and Brezhnev?

Use state capitalism and market incentives to build the economic wealth that can be translated into the growth to enable China to ascend to a level of power where it is indisputably the first nation on earth?

Are the Chinese billionaires the geese laying the golden eggs for the Chinese Communist party? Is Communist doctrine being updated to accommodate the most successful Communist country of them all?