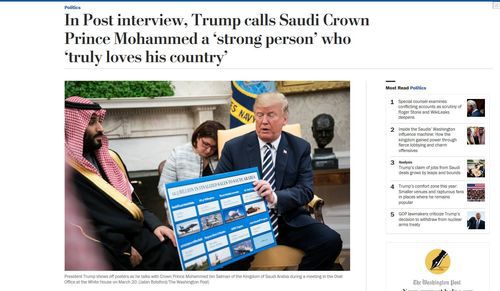 Was the assassination of JFK by Lee Harvey Oswald still getting as much media coverage three weeks after his death as it did that first week after Nov. 22, 1963? Not as I recall. Yet, three weeks after his murder, Jamal Khashoggi, who was not a U.S. citizen, was not killed by an American, and died not on U.S. soil but in a Saudi consulate in Istanbul, consumes our elite press.

The top two stories in Monday's Washington Post were about the Khashoggi affair. A third, inside, carried the headline, "Trump, who prizes strength, may look weak in hesitance to punish Saudis."

On Sunday, the Post put three Khashoggi stories on Page 1. The Post's lead editorial bashed Trump for his equivocal stance on the killing.

Two of the four columns on the op-ed page demanded that the Saudis rid themselves of Crown Prince Mohammed bin Salman, the prime suspect in ordering the execution.

Page 1 of the Outlook section offered an analysis titled, "The Saudis knew they could get away with it. We always let them."

Page 1 of the Metro section featured a story about the GOP candidate for the U.S. Senate in Virginia that began thus:

"Stewart appears to be moving in lockstep with extremist Republicans and conservative commentators engaging in a whisper campaign to smear Khashoggi and insulate Trump from global rebuke."

This was presented as a news story.

Inside the Business section of Sunday's Post was a major story, "More CEOs quietly withdraw from Saudi conference." Featured was a photo of JP Morgan's Jamie Dimon, who had canceled his appearance.

On the top half of the front page of the Sunday New York Times were three stories about Khashoggi, as were the two top stories on Monday.

The Times' lead editorial Monday called for a U.N. investigation, a cutoff in U.S. arms sales to Riyadh and a signal to the royal house that we regard their crown prince as "toxic."

Why is our prestige press consumed by the murder of a Saudi dissident not one in a thousand Americans had ever heard of?

Answer: Khashoggi had become a contributing columnist to the Post. He was a journalist, an untouchable. The Post and U.S. media are going to teach the House of Saud a lesson: You don't mess with the American press!

Moreover, the preplanned murder implicating the crown prince, with 15 Saudi security agents and an autopsy expert with a bone saw lying in wait at the consulate to kill Khashoggi, carve him up, and flee back to Riyadh the same day, is a terrific story.

Still, what ought not be overlooked here is the political agenda of our establishment media in driving this story as hard as they have for the last three weeks.

Our Beltway elite can smell the blood in the water. They sense that Khashoggi's murder can be used to discredit the Trump presidency, expose the amorality of his foreign policy and sever his ties to patriotic elements of his Middle American constituency.

First, there are those close personal ties between Crown Prince Mohammad bin Salman, son of the King, and Jared Kushner, son-in-law of the president of the United States.

Second, there are the past commercial connections between builder Donald Trump, who sold a floor of a Trump building and a yacht to the Saudis when he was in financial straits.

Third, there is the strategic connection. The first foreign trip of the Trump presidency was, at Kushner's urging, to Riyadh to meet the king, and the president has sought to tighten U.S. ties to the Saudis ever since.

Fourth, Trump has celebrated U.S. sales arms to the Saudis as a job-building benefit to America and a way to keep the Saudis as strategic partners in a Mideast coalition against Iran.

Fifth, the leaders of the two wings of Trump's party in the Senate, anti-interventionist Rand Paul and interventionist Lindsey Graham, are already demanding sanctions on Riyadh and an ostracizing of the prince.

As story after story comes out of Riyadh about what happened in that consulate on Oct. 2, each less convincing than the last, the coalition of forces, here and abroad, pressing for sanctions on Saudi Arabia and dumping the prince, grows.

The time may be right for President Trump to cease leading from behind, to step out front, and to say that, while he withheld judgment to give the Saudis every benefit of the doubt, he now believes that the weight of the evidence points conclusively to a plot to kill Jamal Khashoggi.

Hence, he is terminating U.S. military aid for the war in Yemen that Crown Prince Mohammed has been conducting for three years. Win-win.