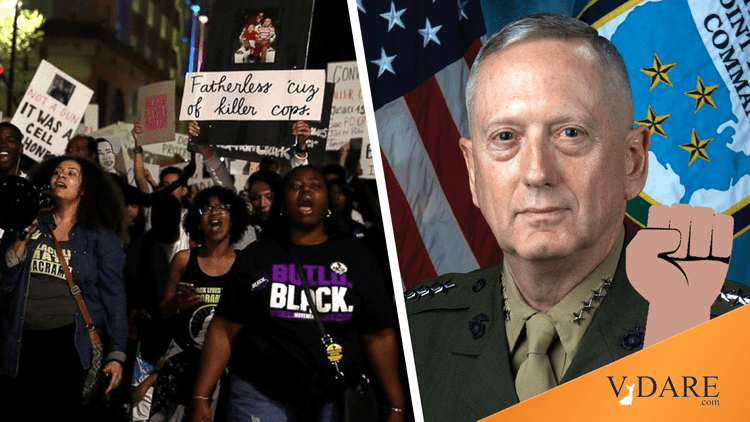 In his statement to The Atlantic magazine, former Defense Secretary General James Mattis says of the events of the last 10 days that have shaken the nation as it has not been shaken since 1968:

"We must not be distracted by a small number of lawbreakers."

Is "a small number of lawbreakers" an apt description of wilding mobs who have showered cops with bottles, bricks and rocks in 40 cities, looted stores in the hundreds, torched police cars, and injured dozens of Secret Service personnel defending the White House?

Is "a small number of lawbreakers" the way a patriot would describe anti-American anarchists who desecrated the Lincoln Memorial, the World War II Memorial on the Mall and the Korean War Memorial and tried to burn down the Church of the Presidents in Lafayette Square?

Was the sacking of Georgetown, Rodeo Drive in LA, 5th Avenue in New York and 40 city centers, the work of a few "lawbreakers"?

Is that a good description of the people who gravely wounded that cop in Las Vegas and shot four cops and murdered that retired black police chief in St. Louis?

The protesters, says Mattis, are "rightly demanding ... Equal Justice Under Law." This is a "wholesome and unifying demand—one that all of us should be able to get behind."

"Donald Trump is the first president in my lifetime who does not try to unite the American people," says Mattis. Trump "doesn't even pretend to try. Instead he tries to divide us."

But it was not Trump who divided America in this racial crisis.

What divided America were the methods and means protesters began using in the first hours of the Minneapolis riot—the attacks on cops with bottles, bricks and Molotov cocktails.

In Mattis' statement, one finds not a word of sympathy or support for the police bearing the brunt of mob brutality for defending the communities they serve, while defending the constitutional right of the protesters to curse them as racist and rogue cops.

"Keeping public order rests with civilian state and local leaders who best understand their communities and are answerable to them," not to the military, says the general.

Correct. But what happens when mobs run wild to where a governor of New York is denouncing the NYPD for failing to protect the city from anarchy and is threatening to replace the mayor for failing to put down the insurrection.

In July 1967, the 82nd Airborne was sent into Detroit to put down the riot. In 1968, there were federal troops in D.C. to stop the rioting in the wake of Dr. King's assassination. In the violent protests of the Nixon era, U.S. airborne troops were brought into the basement of the Executive Office Building.

The general quotes James Madison: "America united with a handful of troops, or without a single soldier exhibits a more forbidding posture to foreign invaders than an America disunited."

And how, General, did that work out for Madison when the "foreign invaders" arrived in Maryland in August 1814, marched up Bladensburg Road, and burned the Capitol and White House and Alexandria, while "Little Jimmy" fled out the Brookville Road?

If memory serves, it was Gen. Andrew Jackson and the troops he pulled together for the Battle of New Orleans who defeated the British and saved the Union.

"Society cannot exist," wrote Edmund Burke, "unless a controlling power upon will and appetite be placed somewhere; and the less of it there is within, the more there must be without.

"It is ordained in the eternal constitution of things, that men of intemperate minds cannot be free. Their passions forge their fetters."

That is where we are now. Society and civilization are on the line.

If mob tactics are now how we change laws and alter public policy, the democratic republic is dead and we have gone full Third World.

Some of us do not believe America is a racist society or that the nation's police, numbering a million men and women, are shot through with anti-black racism.

Some of us believe the police are the last line of defense we have against that "small number of lawbreakers" Mattis tells us are no problem.

Did the general actually produce this pile of mush that reads like something out of Ramsey Clark in the 1960s?

My guess: Mattis, an obedient servant of President Trump for two years, has been persuaded that the wind is blowing the other way and his "place in history" demands that he get himself on the correct side.

The general has just defected to the resistance.