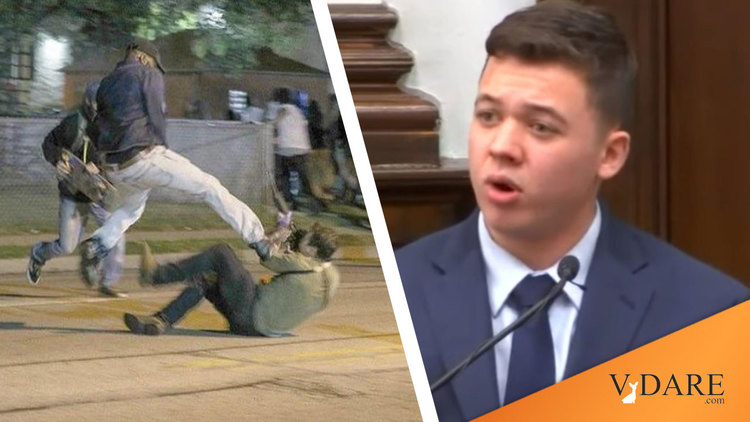 Earlier by Ann Coulter: Left Trying Get Rittenhouse Like They Got Proud Boys, So NO ONE Will Dare Resist Them

In judging the actions of Kyle Rittenhouse, set aside for the moment Wisconsin law under which he is being tried, and consider the natural law, the moral law, the higher law written on the human heart.

In terms of values demonstrated and the deeds done that night that Rittenhouse shot the three men who attacked him, who was on the righteous side?

Watching on television the nightly riots in Kenosha, Wisconsin, a town 20 miles from his home in Antioch, Illinois, that he knew well, Rittenhouse decided to go to Kenosha to protect property that embattled police had been unable to defend during the riots. For protection, he picked up the AR-15 he kept in Kenosha.

Toward midnight, Rittenhouse was confronted by Joseph Rosenbaum, an ex-con twice his age. Rosenbaum threatened Rittenhouse, backed him into a corner and tried to grab the barrel of his rifle. When a shot rang out nearby, Rittenhouse shot four times within a single second.

When Rosenbaum fell, Rittenhouse took off running, looking for the police to turn himself in, with a mob in hot pursuit.

Another man confronted him with a loaded pistol and aimed it at Rittenhouse's face from a few feet away.

Rittenhouse shot and killed Anthony Huber, who had hit him with the skateboard and was grabbing his gun barrel, and wounded the man holding the gun to his face. When Rittenhouse shot both men, he was still on the ground.

While Rittenhouse's decision to go to Kenosha may have been unwise, it was also unselfish and, indeed, brave. He was risking his life in a riot to defend another man's property and do his civic duty in a situation of lawlessness. He could have stayed home, as almost everyone in Kenosha did that night, while their city was burned and pillaged.

And what were the motives and goals of Joseph Rosenbaum, the child rapist and ex-con, and Anthony Huber, who wielded the skateboard?

What were they doing in Kenosha, if not helping to sustain a criminal riot to destroy property Rittenhouse had come to defend?

"Why was he there? I have no answer. I ask myself that question every day," said Rosenbaum's fiancee about that night.

Again, whatever one thinks of Rittenhouse's crossing state lines and entering a volatile situation, he emerges as one of the good guys. His actions were taken for commendable goals, whereas his assailants' purposes were to engage in a criminal rampage and riot.

This is why Rittenhouse is being so fiercely defended. People sense that whatever he did, the 17-year-old went to Kenosha to do the right thing.

Those who believe the Black Lives Matter–Antifa riots were justified are the ones who want Rittenhouse to spend the rest of his life in prison—for shooting rioters who were threatening and attacking him for interfering with their crimes.

Sensing Rittenhouse has the country behind him, media efforts have been mounted to find a racial element in Rittenhouse's motivation. President Joe Biden implied that the Kenosha shootings were the work of white supremacists.

The president's statement was as ignorant as it was malicious.

Rittenhouse is white. All three men he shot are white. His defense attorney and the prosecutor are white. The trial judge is white.

Only Rosenbaum is recorded as having used the N-word that night during what was billed as a BLM protest for racial justice.

Under Wisconsin law, the issue comes down to self-defense.

Did Rittenhouse fire his AR-15 because he believed, with reason, that he might suffer death or serious bodily harm if he did not?

Or did he provoke the rioters into attacking him so he could run up a body count, as the prosecution alleges?

Shooting the individual who put the loaded pistol in Rittenhouse's face was surely self-defense. And, according to testimony, Rosenbaum and Huber both sought to grab the barrel of the AR-15 to pull it away, in which case Rittenhouse would have been at their mercy, and possibly dead.

The judge has expanded the range of charges of which Rittenhouse may be convicted, giving the jury a menu of lesser charges if they do not believe that Rittenhouse was guilty of "intentional homicide."

The prosecution has described Rittenhouse as an "active shooter," calling to mind the Las Vegas gunman who massacred dozens of people at a music concert by firing from his hotel room.

But a 17-year-old running from a mob and shooting while sitting on the ground and being attacked scarcely fits the description of an "active shooter."

Kyle Rittenhouse used his rifle to protect someone else's property and his own life. He was both righteous and in the right. They were in the wrong.