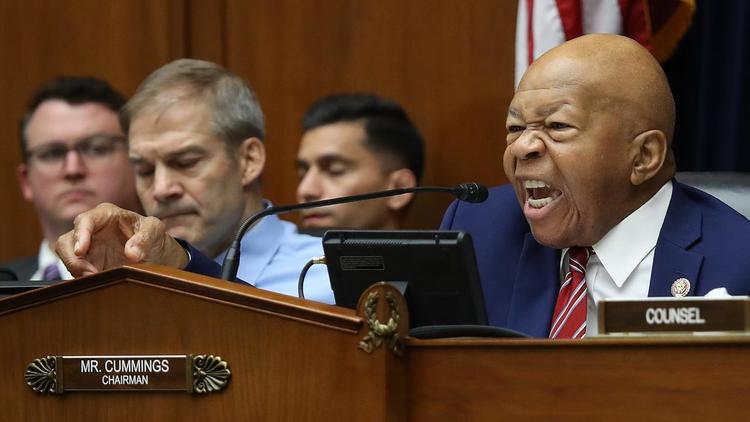 Did President Donald Trump launch his Twitter barrage at Elijah Cummings simply because the Baltimore congressman was black?

Was it just a "racist" attack on a member of the Black Caucus?

Or did Trump go after Cummings after a Saturday Fox News report that his district was in far worse condition than the Mexican border area for which Cummings had demagogically berated Border Patrol agents?

"Elijah Cummings has been a brutal bully, shouting and screaming at the great men & women of Border Patrol about conditions at the Southern Border, when actually his Baltimore district is FAR WORSE and more dangerous. His district is considered the Worst in the USA...

"...the Border is clean, efficient & well run, just very crowded. (Cummings') District is a disgusting, rat and rodent infested mess. If he spent more time in Baltimore, maybe he could help clean up this very dangerous & filthy place."

The Fox News report that triggered Trump's tweets featured a Maryland Republican strategist, Kimberly Klacik, whose videos showed piles of trash and abandoned homes in Baltimore. "A lot of people said he (Cummings) hasn't even been there in a while," Klacik claimed.

And Trump, it appears, has more ammunition than that.

Baltimore in 2018 was the murder capital of America and ranked second among her most violent major cities. With St. Louis and Detroit, Baltimore is always at or near the top of the list of the most dangerous American cities.

And what has Cummings, in office 28 years, done to alter that awful reputation?

As for the presence of rats and rodents, Baltimore has competitors.

There have lately been news reports of the homeless in LA and San Francisco living on city sidewalks, defecating where they sleep, attracting rodents and vermin, with little or nothing done about it.

Is it racist to call attention to the decline of so many of America's great cities that have long been under liberal Democratic rule?

Over this weekend, while Trump was tweeting, nine people were shot dead in Chicago and 39 wounded. Sounds like Baghdad or Kabul.

Is this the new normal that Americans must accept?

A prediction: The incidence of murders, rapes, robberies and assaults in urban America, which saw a steep decline in the last three decades, is about to rise again.

Why? Because the attitudes and policies that produced these sinking rates of crime and violence—especially the dramatic increase in the incarceration of criminals in America—are changing.

In 1980, some 500,000 criminals were in federal and state prisons and jails. By 2016, some 2.2 million inmates were in jails and prisons and another 4.5 million convicts were on parole or probation, being monitored.

As violent criminals were taken off the streets and put behind bars for years, crime fell, and most dramatically in cities like New York, where the backing of cops and intolerance of criminals by mayors Rudy Giuliani and Mike Bloomberg was the most pronounced.

Hundreds of thousands of Americans were not victimized by crimes in the last three decades because their would-be perpetrators were behind bars. But today, a campaign is afoot to reduce prison populations and use more progressive methods to deal with crime.

Ex-Vice President Joe Biden, who, as a senator and a chairman of the Judiciary Committee, played a role in taking criminals off the streets, seems almost apologetic about what he and the "law and order" Republicans of those decades accomplished.

And the mindset that put first the right of the innocent to be free from domestic violence is vanishing. A recent video of NYPD cops being doused with pails of water as they made their rounds in Harlem has gone viral. The number of applicants for police training programs is dropping. Verbal assaults on "white racist cops" have taken a toll on police morale.

We seem to be drifting back to the 1960s, when crime began to soar and "law and order" began to surge as a national issue.

That issue helped Barry Goldwater capture the nomination from a Republican establishment that had controlled his party for decades.

In 1966, Hollywood actor Ronald Reagan ran as a law and order candidate for governor and routed the liberal incumbent by a million votes.

In 1968, Richard Nixon ran as the law and order candidate, which helped him to stave off George Wallace and defeat Hubert Humphrey, whose Democratic Party was almost twice the size as the GOP.

In 1988, Democratic nominee Gov. Michael Dukakis' prospects for the presidency vanished when he indicated he would not impose capital punishment, even on a criminal who had raped and murdered his wife.

Calling out the urban liberals who run most of America's cities, for their failure to make those cities more livable and safe, might be a winning issue for Trump in 2020.

Is this where Trump is headed? Is it a coincidence that Attorney General Bill Barr just said he will begin imposing the death penalty?