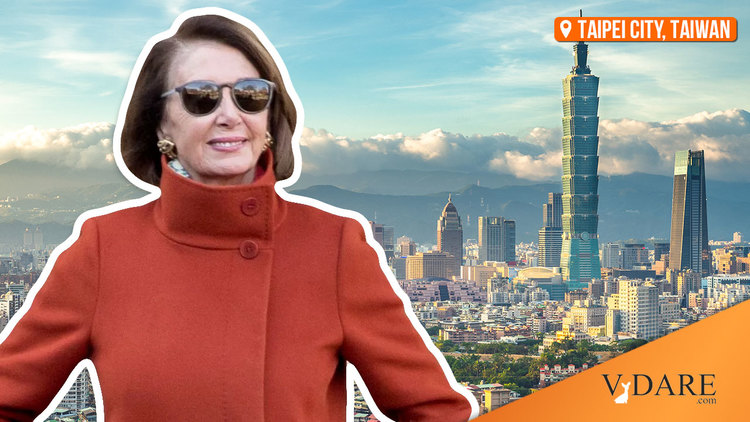 When Speaker of the House Nancy Pelosi added to the itinerary of a valedictory trip through Asia the island of Taiwan, she could not have been oblivious to the reaction she would produce in a stunned Beijing.

Thus, when the Financial Times revealed that the speaker would be visiting Taiwan, which China regards as a breakaway province, an enraged Beijing took the Pelosi visit to be a deliberate U.S. provocation.

“If the U.S. insists on going its own way, China will take firm and forceful measures to firmly safeguard national sovereignty and territorial integrity,“ a Chinese spokesman told reporters in Beijing. “The U.S. must bear all the consequence of the visit.“

Privately, Beijing is said to be issuing more pointed and serious warnings, which involve military action.

Pelosi apparently did not coordinate or clear the visit to Taiwan with the White House or Defense Department. Wednesday, President Joe Biden told reporters: “The military thinks it‘s not a good idea right now“ for Pelosi to travel to Taiwan.

So where do we stand?

China is promising serious retaliation if the highest U.S. official since Speaker Newt Gingrich in 1997 flies to Taiwan.

The Biden administration is putting out word that it does not believe that a Pelosi visit to Taiwan is a wise move, when the Chinese Communist Party is on the eve of a conference to decide on a third five-year term for President Xi Jinping.

If Pelosi postpones or cancels the visit, it will be seen as a U.S. climbdown in the face of Chinese indignation and protest, and an affront to our friends in Taiwan.

Around the Asia-Pacific rim, the word will be, “The Americans, faced with China‘s firmness, backed down.“

But if the visit goes forward, China is publicly committed to respond. Either way, relations between our countries will likely suffer, and perhaps seriously, if the Chinese opt for a military response to a Pelosi visit.

However this collision plays out, the U.S. is paying the price for having adopted, decades ago, a policy of building up China in the hope and expectation that Beijing would evolve into a benign and friendly rival and competitor of the United States.

Granted most-favored-nation trade status by the U.S., which also ushered it into the World Trade Organization, China has moved, since the turn of the century, from a country with an economy smaller than Italy‘s into a manufacturing monolith that is the rival of the United States.

Though China‘s navy is less powerful than the U.S. Navy, it is now larger in the number of ships it deploys.

Strategically, China has moved to claim 90% of the South China Sea, the Paracel and Spratly island chains, and most of the rocks and reefs in the territorial waters of Vietnam, Malaysia, Brunei, the Philippines and Taiwan. Some of these rocks and reefs have been converted by China into fortified air and naval bases.

China not only claims Taiwan, and the Taiwan Strait as territorial waters; it claims the Senkaku Islands, occupied and claimed by Japan.

In 1972, U.S. President Richard Nixon and Henry Kissinger, in Peking, seemed to concede China‘s claim to Taiwan in the Shanghai Communique that came out of that historic summit:

“The United States acknowledges that all Chinese on either side of the Taiwan Strait maintain there is but one China and that Taiwan is a part of China. The United States Government does not challenge that position. It reaffirms its interest in a peaceful settlement of the Taiwan question by the Chinese themselves.

In 1979, President Jimmy Carter broke relations with the Republic of China on Taiwan, recognized Communist China and abrogated the mutual security treaty with Taipei dating to 1954.

For the last three decades, the importation of Chinese-made goods by the United States and the transfer of U.S. manufacturing to China to take advantage of the low wages and productive labor force have led to many trillions of dollars in successive China trade surpluses with us and the rapid emergence of China as an Asian superpower.

Lately, Beijing‘s military has made repeated incursions into Taiwan‘s air defense identification zone and has had a growing number of encounters with the U.S. Navy and Air Force planes in the South China Sea.

A U.S.-China collision somewhere in the Western Pacific appears inevitable. The only questions are when and where.

Patrick J. Buchanan needs no introduction to VDARE.COM readers; his books State of Emergency: The Third World Invasion and Conquest of America, and Suicide of a Superpower: Will America Survive to 2025? are available from Amazon.com. Patrick J. Buchanan is the author of “The Greatest Comeback: How Richard Nixon Rose From Defeat to Create the New Majority.“