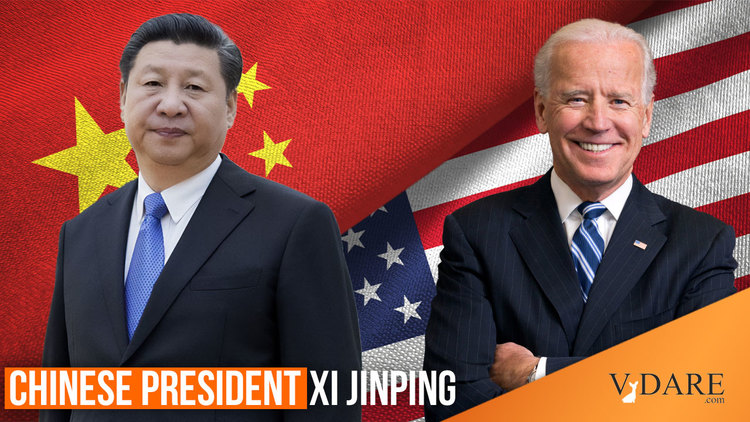 Patrick J. Buchanan: Autocracy vs. Democracy or China vs. America?

"I've known Xi Jinping for a long time. ... He doesn't have a democratic—with a small 'd'—bone in his body," said Joe Biden in his first press conference as president, and then he ambled on:

"He's one of the guys, like (Russian President Vladimir) Putin, who thinks that autocracy is the wave of the future—democracy can't function in an ever-complex world.

"It is clear, absolutely clear ... that this is a battle between the utility of democracies in the 21st century and autocracies. ... We have to prove democracy works."

Thus did Biden frame the conflict between America and China in almost purely ideological terms.

"Look ... your children or grandchildren are going to be doing their doctoral thesis on the issue of who succeeded: autocracy or democracy? Because that is what is at stake, not just with China."

But is this really what the conflict between America and China for economic, military and strategic supremacy is about—a contest between two political systems? And does Xi Jinping see it that way?

Does Xi see himself as the global champion of "autocracy" or as the nationalist leader of the Chinese people and Mao's successor as The Great Helmsman who heads the party that decides the destiny of the nation?

And are we Americans really the champions of the democracy camp in a great twilight struggle with "autocracy"?

How, then, do we embrace as a NATO ally of 70 years the Republic of Turkey, which is ruled by the autocrat Recep Tayyip Erdogan?

Our Arab allies and partners include President Abdel-Fattah el-Sissi of Egypt, who came to power through a military coup that ousted an elected government. Also aligned with us are the king and crown prince of Saudi Arabia, and the monarchies of the Persian Gulf who might fairly be called not only monarchists but autocrats.

Are the king of Bahrain, the emir of Kuwait and the sultan of Oman members in good standing in America's club of democracies?

Unlike the USSR of Lenin, Trotsky and Stalin, Xi's China does not appear to seek to impose its political system upon the nations with which it has deep trade and commercial ties such as Australia, Japan and South Korea.

Where Nikita Khrushchev thundered, "Your children shall live under Socialism," Xi does not.

Indeed, in the ideological struggle defined by Biden, it appears that it's the United States and Western democracies demanding that China abide by our beliefs and values, not the other way around.

Xi puts China first, and his own people, the Han Chinese majority, also first. As for the tribal and ethnonational minorities inside China—Uighurs, Kazakhs, Tibetans, Mongols, Manchu, Hong Kongese—their rights are subordinated and restricted, as are the beliefs and value systems of Christians in many of the 50 or so Muslim countries.

Unlike America's liberal elites who celebrate racial, religious and ethnic diversity—the more the better—China's rulers seem to fear racial, religious, ethnic and ideological diversity as forces threatening the kind of disintegration that befell the Soviet Empire and USSR.

And unlike the Americans who worship at the altar of equality, the Chinese act on the belief that not all religious, racial and ethnic minorities have equal rights.

And while China's growth in real and relative power and prosperity in the decades since Tiananmen Square in 1989 has been epochal, the politics of the USA seem to have grown more poisonous and the racial divisions more rancorous than they were at the end of the Reagan era.

Nor does Biden's faith in small "d" democracy appear to have been shared by the men who founded the United States as a "republic, if you can keep it." They saw democracy not as some object of veneration but as a danger to be avoided

"Remember, democracy never lasts long," John Adams wrote. "It soon wastes, exhausts, and murders itself. There was never a democracy yet that did not commit suicide."

Perhaps our greatest Chief Justice John Marshall said, "Between a balanced republic and a democracy, the difference is like that between order and chaos."

"A Democracy is the vilest form of Government there is," said Tom Paine, who was echoed by the father of the Constitution, Madison himself:

"Democracy is the most vile form of government. Democracies have ever been spectacles of turbulence and contention incompatible with personal security or the rights of property."

By the end of a long life, Thomas Jefferson concluded: "A Democracy is nothing more than mob rule, where 51% of the people may take away the rights of the other 49%."

And that is the meaning of "America First."