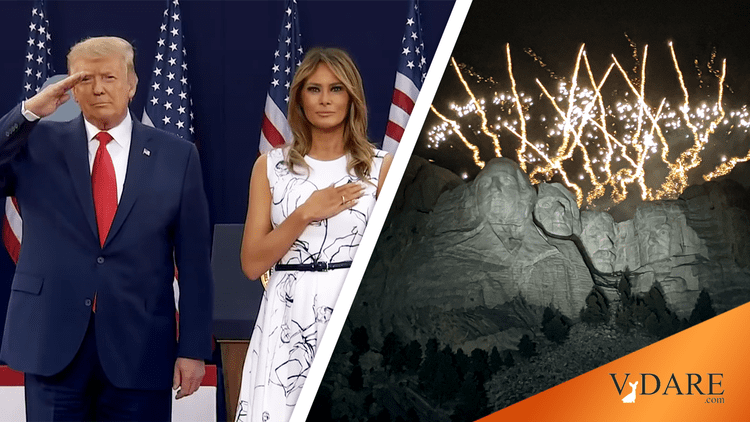 Speaking at Mount Rushmore on Friday, and from the White House lawn on Saturday, July 4, Donald Trump recast the presidential race.

He seized upon an issue that can turn his fortunes around, and the wounded howls of the media testify to the power of his message.

Standing beneath the mammoth carved images of Presidents Washington, Jefferson, Lincoln and Theodore Roosevelt, Trump declared: "Angry mobs are trying to tear down statues of our founders, deface our most sacred memorials, and unleash a wave of violent crime in our cities."

These mobs are made up of Marxists, criminals and anarchists. Their cause is a cultural revolution. "Their goal is not a better America. Their goal is the end of America."

After reciting the achievements of his four predecessors, Trump added: "No movement that seeks to dismantle these treasured American legacies can possibly have a love of America at its heart."

Then he put it right into the basement hideaway of Joe Biden: "No person who remains quiet at the destruction of this resplendent heritage can possibly lead us to a better future."

Trump is calling out Biden's silence in the face of an onslaught against our heroes and history as manifest political cowardice that makes Biden a moral accomplice of the mobs.

One day, Basement Boy is going to have to speak out.

Where was Biden when Trump was standing up for America on Independence Day?

As his Party tweeted that Trump's trip to Mount Rushmore was aimed at "glorifying white supremacy," Biden was wailing about the need "to rip the roots of systemic racism" out of America.

On one side are those who believe America is a good country, the greatest the world has ever seen, and that the men who created this miracle should be respected, revered and remembered.

That is not the view of the left wing of the Democratic Party.

For even as the fireworks were exploding on the Mall, a Baltimore mob was tearing down, smashing up and dumping into the Inner Harbor a landmark statue of Christopher Columbus.

That statue stood next to the Baltimore neighborhood of Little Italy and had been dedicated in 1984 by President Ronald Reagan.

Do the haters of Columbus think that destroying Columbus' statues across America will not anger and alienate Americans of Italian descent who revere the explorer? Does Biden think Italian-Americans will reward a candidate and party that will not renounce the mob that did this?

As the left wing of the Democratic Party embraces the "defund the police" movement, how long will it hold onto voters who are today watching murder rates climb to new records?

During Independence Day weekend in Chicago, 80 people were shot, and 17 of them killed.

In New York City, the number of shooting victims has risen this year by 50%. In June, there were 250 shootings, an increase of 150 over June 2019. Mayor Bill de Blasio's response: cutting $1 billion from the NYPD budget.

Over July 4, an armed Black militia arrived at the reopening of the Stone Mountain monument in Georgia, which features huge carved images of Robert E. Lee and Stonewall Jackson. They want its destruction.

Trump is charged with "dividing the nation."

But it is not Trump trashing cops or providing cover for "protests" marked by looting and arson. Nor is it Trump tearing down memorials and monuments to the great Americans of the past.

Where the Democratic Party has been a portrait in indecisiveness, Trump has been clear. He stands with the cops who have gone through a hellish six weeks. He stands against defacing statues and destroying monuments. He has denounced the rioting, looting and arson that have accompanied protests the media never cease to describe as "peaceful."

It is not Trump who is dividing America. He has pledged to resist the rampages with all the weapons in his presidential arsenal.

There are four months until November's election, 18 weeks until America decides: Do we want to continue an era of protests that revert to rioting, looting and arson? Do we want to see police departments further constricted and trashed as neo-fascist?

Do we wish to see statues of presidents from Washington, Jefferson, Jackson, Lincoln and Grant to Teddy Roosevelt trashed by mobs that hate America, hate her heroes and hate her history?

Trump's stand for tradition and against mob rule is the only stand the president can take. And it is a necessary stand. For this culture war is going to last long after this presidency. And it is going to determine what kind of country we shall become.

Will it be the great and glorious republic of the past or the social and cultural Marxist hellhole that is the promise of the mobs?

Trump just played the patriotism card, the correct card to play, and it may just work for his reelection.