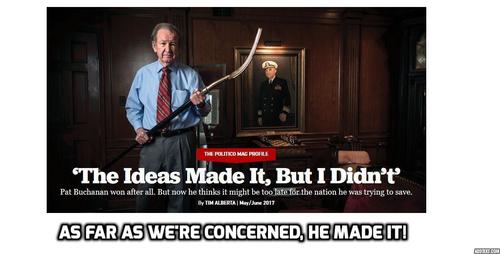 Pat Buchanan at 80—“Right From The Beginning,” After All 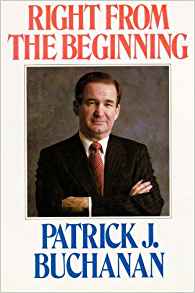 Patrick J. Buchanan turns 80 years old on Friday, November 2. The man and his supporters can now look back and reflect on how right he has been—the election of Donald Trump and the continuing transformation of the GOP into a populist-nationalist party are directly connected to Pat Buchanan and his swimming against the Establishment tide decades ago.

Patriotism and a passionate attachment to America—not blind devotion to a party label (recall his leaving the GOP to run as the Reform Party’s candidate in 2000: Buchanan joked that he was “Free at last, free at last!” [Buchanan's Reform Tour Is Snubbed by Ventura, by Francis X. Clines, New York Times, October 29, 1999]) or “true conservatism”—have been Pat’s guiding lights.

Tom Piatak wrote in VDARE.com’s on Pat’s 70th and 75th birthday (at 70 and 75). The headlines telegraphed the story: “He Told You So, You F****ing Fools!” and “Now, More Than Ever, Entitled to Say ‘I Told You So!” The Republican Establishment, playing its familiar and no doubt, comfortable role of “beautiful losers” was quite content to lose, if not throw, elections to President Hope and Change. Thus the late Senator John McCain noted how honored he was to concede the 2008 election to his esteemed colleague Barack Obama, a candidate the “maverick” McCain studiously avoided criticizing. [Transcript Of John McCain's Concession Speech, November 5, 2008]. So went the “Stupid Party” at the peak—or was it at the twilight?—of its conspicuous stupidity, content with its duplicitous niche in the Kabuki theater of Beltway politics.

After the debacle of Bush II’s Iraq War, which Pat Buchanan correctly foresaw as a disaster in the making, and after two terms of Obama’s acceleration of the radical drive to “transform” America by replacing Americans, the political tide finally, belatedly, turned in the direction of “peasants with pitchforks,” AKA the “deplorables.”

Pat Buchanan played the most important role in the post-Cold War era in paving the way for Trump, not only by running for the Republican nomination in 1992 and 1996, or by his Reform Party candidacy, but in thoroughly, passionately, convincingly arguing for “America First!” policies in books such as The Great Betrayal, A Republic, Not an Empire, The Death of the West, State of Emergency, and Suicide of a Superpower, in his columns and as a media commentator, to say nothing of his autobiographical volumes Right From The Beginning and Nixon’s White House Wars. Policies on trade, immigration, and foreign entanglements that Trump has at least rhetorically embraced were 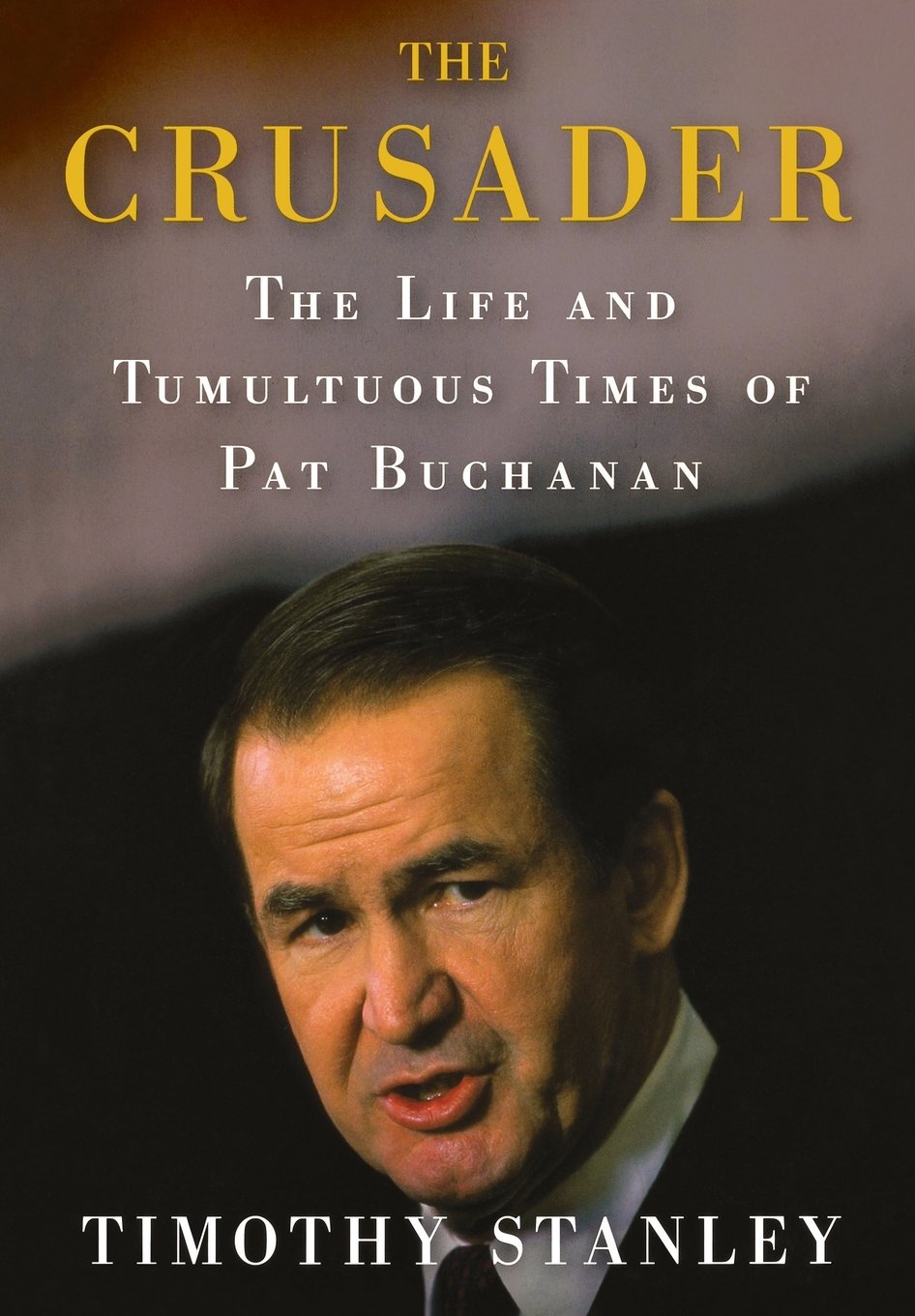 articulated by Pat Buchanan years before the 2016 campaign. “America First!” is a Buchananite slogan. And a willingness to withstand the inevitable media attacks, and even risk his livelihood, was displayed by Buchanan well before Trump appeared on the political stage.

What’s more, it’s likely that the transformation of Ann Coulter and Tucker Carlson from “true conservatives” to MAGA patriots was in no small part influenced by Pat Buchanan.

More than a few of us were taken by surprise by the Orange Man’s sally onto the America First battleground. A reality TV star with a flair for crude showmanship and a less-than-staid lifestyle seemed to be the antithesis of the gentlemanly Buchanan. Yet both men relish a good fight. And whatever The Donald lacks in verbal facility and intellectual depth, he makes up for in instinct and heart.

Trump’s skillful trolling of his enemies, his direct attacks on “fake news” media, and his often circus-like (also often hilarious) stunts—such as the Kanye West Oval Office visit, with Trump, jaw set and comb over firmly in place, nodding gravely in agreement to Kanye’s rambling remarks—trigger hysterical screeching from the MSM and increasingly nutty Trump haters (but I repeat myself). However, it’s not solely Trump’s personality that is driving the globalist hobgoblins into a rage—it’s his “America First!” instincts and policy preferences that most of all inflame their ire.

Pat Buchanan is by universal agreement a gracious, considerate, and kind man. I’ve experienced this first hand. Pat’s a happy warrior, to be sure, but a man even sane liberals, when there were still a number of them, genuinely liked and respected. That did not prevent his most vociferous critics from labelling him a fascist, and his political stance cost him his job with MSNBC.

This writer can well recall a time when the mention of Pat’s name might send self-styled “respectables” into something like a seizure requiring immediate medical attention (yours truly used to do a bit of trolling himself, before the term was coined and gained currency on the Internet, then in its infancy). Both Buchanan and Trump represent what the nattering nabobs of the Beltway bubble truly hate—what some call “heritage America,” and the “legacy Americans” themselves.

Pat Buchanan has supported President Trump, overlooking some unkind remarks the president once made about him [When Trump ran against Trump-ism: The 1990s and the birth of political tribalism in America, by Steve Kornack, NBC, October 2, 2018]. For Buchanan, America trumps, so to speak, politically-motivated personal slights. Maybe Trump should install a hot line to Buchanan’s study. He would probably benefit from Pat’s advice.

If one had to choose a single word to describe Pat Buchanan, perhaps the word “loyal” would do. He stood by his friends Joe Sobran and Sam Francis when a more timid man would have cut and run. He has never backed away from defending the things he cherishes and values—his country, his faith, his friends.

Buchanan once described people like himself, as well as the people he was defending, as “conservatives of the heart.” He stated boldly that he intended to provide a voice for the voiceless (“We will be the lobbyist for people who don’t have a lobbyist”) [The Republican Establishment’s 20-Year War On Conservatives, By Ryan Walters, Mississippi Conservative Daily, August 19, 2014]

Back in 1992, Pat correctly noted that the “Conservative Movement” had failed to address “issues of the heart”, the powerful attachments that make us human, that give us direction and purpose, attachments that should need no explanation [Buchanan Aims To Unify Factions, By Thomas B. Edsall, Washington Post, February 17, 1992]. To borrow from VDARE.com editor Peter Brimelow, these are attachments “that are not irrational but arational—beyond the reach of reason” . Pat Buchanan has been the champion of such attachments of the heart, the deepest and most important ones human beings have.

A personal note: Pat’s “conservatives of the heart” comment made quite an impression on me at the time. I knew he was talking about people like my parents, working people who lacked the educational credentials and social standing to be taken as anything but for granted by the “conservative movement.” They were people now openly held in disdain by our elite, an elite that also hates Donald Trump, and that earlier vilified Pat Buchanan. Whatever good may come from a Trump administration, we should never forget the man who paved the way for him.

Happy birthday, Pat. And thanks.

Wayne Allensworth (email him) a corresponding editor of Chronicles magazine, is the author of The Russian Question and a recently published novel, Field of Blood (Endeavour Media) which deals with the issues of Open Borders and globalization’s impact on the fictional town of Parmer, Texas. 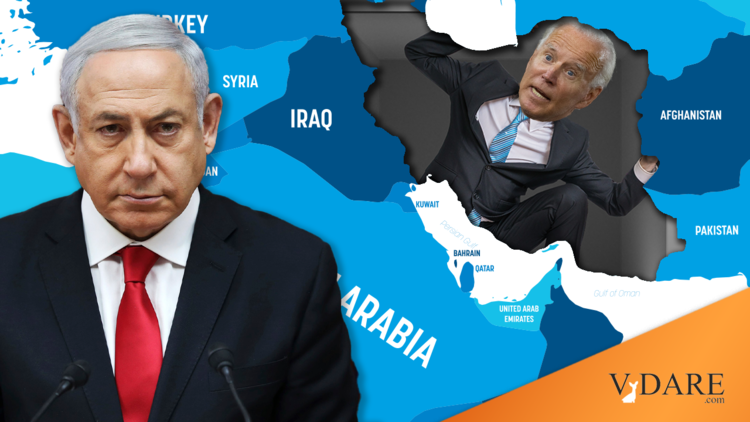 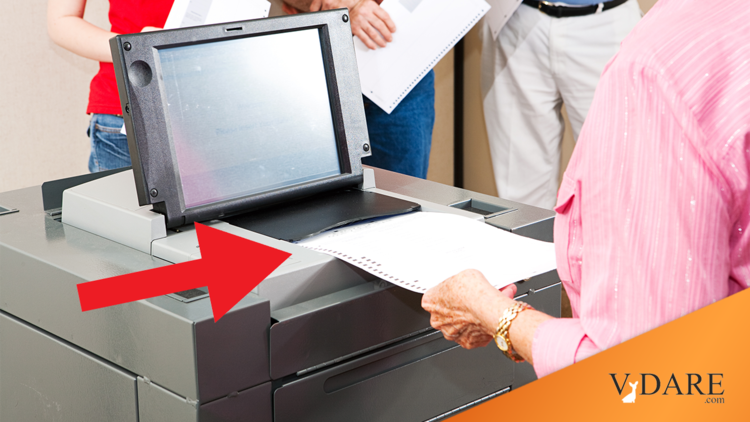 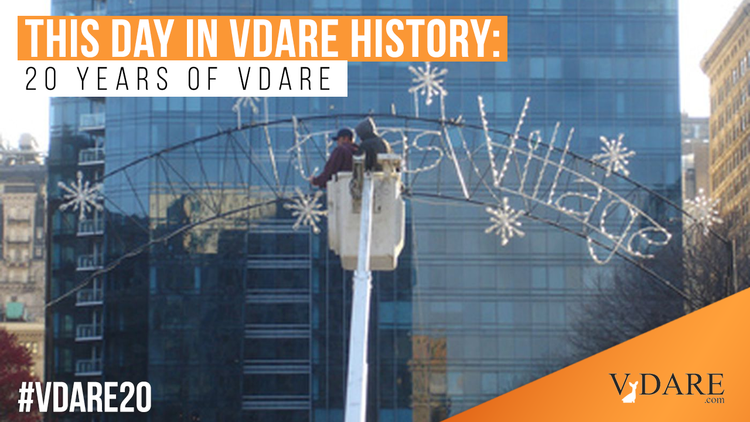 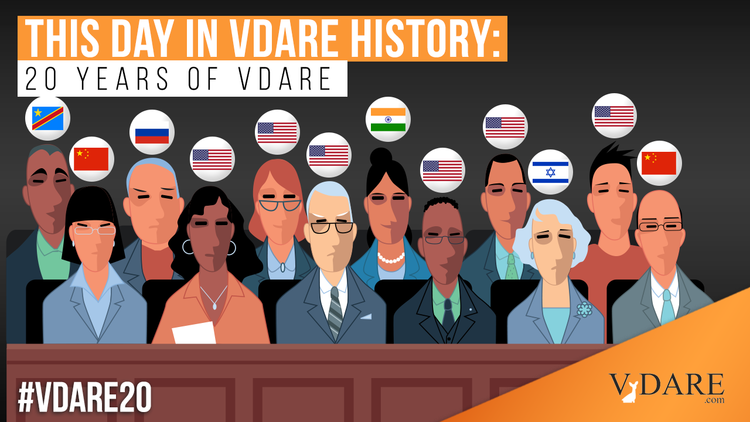 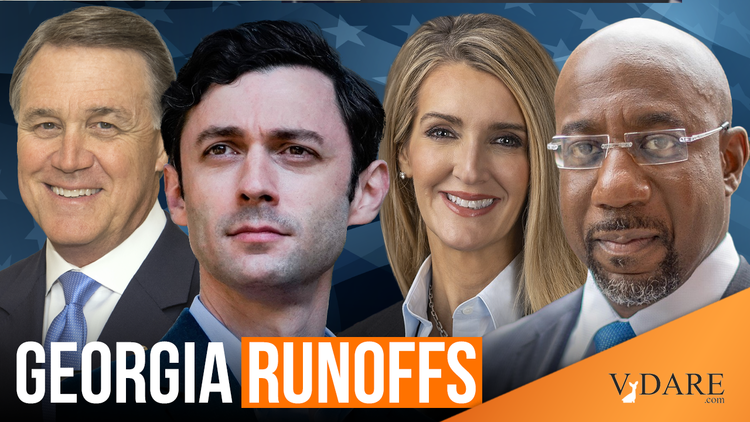 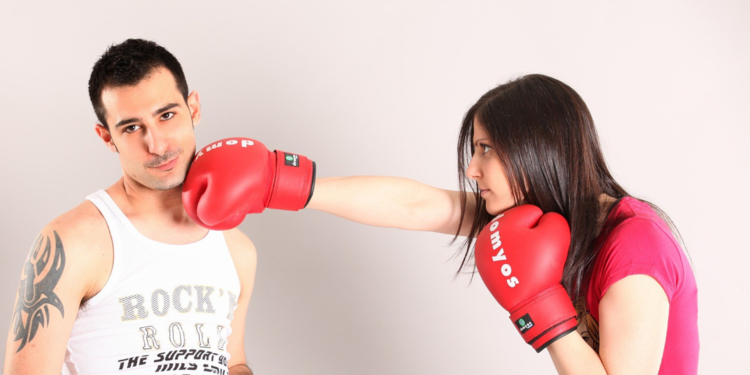