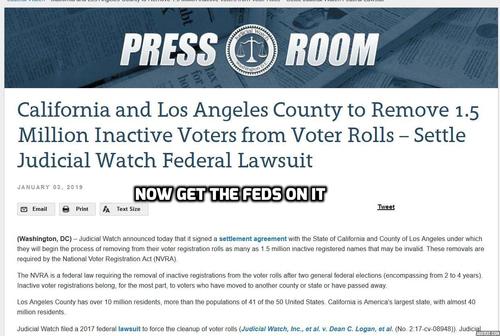 I attended an annual Christmas gathering of conservatives in Sacramento In the wake of California’s disastrous 2018 midterms—the Democrats elected a supermajority in the legislature and a new Social Justice Warrior as governor. I saw despair and defeat in every eye. This gathering has been shrinking in size every year because so many of the former attendees have moved to other states. I wouldn’t be surprised if next year they canceled it altogether. It is hard to deny that, to adapt von Clausewitz’s standard for victory, the will of patriotic California to resist the Great Replacement has been broken.

Former State Senator Ted Gaines—currently the senior Republican in the state—addressed this gathering and said that California’s only hope is that the Trump Administration intervenes and comes to the state’s rescue.

Since at least 1965 Social Justice Warriors have been diligently working to break our will to resist demographic change through mass immigration—and in California at least, that strategy has been an undeniable success.

Today, the California that elected Ronald Reagan governor twice is now a majority-minority state ruled by a Democratic Party supermajority, not because they have won any battle of ideas, but because they have won the demographic battle that Californians once resisted, and that GOP elites shamelessly conceded, many years ago. [Dems Gain Veto Proof Supermajority in California Legislature, by Morgan Gstalter, The Hill, November 12, 2018]

The most impressive attempt to resist this demographic war was California’s Proposition 187 in 1994, which would have prohibited illegal aliens from attending public schools and receiving most public services. The Save Our State Initiative, as it was then called, was spearheaded by Assemblyman Dick Mountjoy and private citizen Barbara Coe (both now deceased). It passed with 59% of the vote, despite an hysterical vilification campaign in the Main Stream Media.

Naturally, cuckservatives like Jack Kemp and William Bennett vocally opposed 187 [Kemp, Bennett and INS Chief Decry Prop. 187, by Ronald Brownstein, Los Angeles Times, October 19, 1994]. Here began the Orwellian strategy that insists that GOP candidates must be cheerleaders for their demographic demise in order to win elections. Former GOP Attorney General Dan Lungren subsequently adopted that strategy and actually criticized Prop 187 when he ran for governor of California in 1998, as well as Proposition 227 (which also passed) and which successfully ended most bilingual education in public schools. Needless to say, Lungren lost in a landslide to Democrat Gray Davis.

Open Borders activists would go on to successfully stymy Proposition 187 in federal court, assisted by Governor Davis who refused to defend it, [Davis Won't Appeal Prop. 187 Ruling, Ending Court Battles, LA Times, July 29, 1999] and the national Republican Party which refused to support it.

President Bill Clinton faced reelection in 1996. So he ordered the construction of a formidable border fence near San Diego and ran effective ads touting his tough record on immigration enforcement and criticizing GOP nominee Bob Dole as weak on border security. [In 1995, Bill Clinton Was All About “Building That Wall, C-SPAN, January 24, 1995]. Which Dole was—he even selected the appalling Kemp as his running mate.

Funny how that position didn’t hurt Bill Clinton’s electability. He won California with 51% of the vote, including 73% of the Hispanic vote.

Still, patriotic Californians hadn’t tossed in the towel yet. They recalled Governor Gray Davis in 2003 and elected Arnold Schwarzenegger, largely over the issue of drivers licenses for illegal aliens, which Davis supported and Schwarzenegger opposed. [Schwarzenegger Scores Victory In Repeal Of License Law, CNN, December 2, 2003]

You would think that Schwarzenegger's success, however temporary, would provoke the Ed Gillespies who run the GOP to put down their pom poms and reconsider their immigration cheerleader strategy. But no: “Anti-immigration rhetoric is a political siren song and Republicans must resist its lure,” Gillespie condescendingly declared, several months before the Republicans lost both houses of Congress in the 2006 midterms [“Populists, Beware!” by Ed Gillespie, Wall St Journal, April 1, 2006].

Can anyone still deny that the real siren song has always been the one of demographic surrender sung by post-American Republicans like Ed Gillespie?

Incredibly, throughout this entire period, the California GOP has never fielded a state-wide candidate who explicitly opposed the Great Replacement. Indeed, the party Establishment has gone to great lengths to sabotage candidates, like 2014 gubernatorial contender Tim Donnelly, who seemed about to do so. Of course, California’s whites a.k.a. Americans notoriously lack the racial solidarity of demographically-comparable Texas. And they’ve been fed a solid diet of disinformation.

At any rate, those victories under Schwarzenegger proved to be short-lived as more Third World immigrants entered the state, and more native Californians abandoned it.

In 2010, therefore, Jerry Brown was easily elected governor and subsequently made California an official Sanctuary State for illegal aliens, including in-state tuition and drivers licenses. Consequently, there has been an ongoing wait list for moving trucks heading out of state due to the growing number of Californians who have given up on it. [So Many People Are Leaving the Bay Area, A U-Haul Shortage Is Jacking Up Prices, by Michelle Robertson, San Francisco Chronicle, February 15, 2018]

So how could the Trump Administration save California? Other than building a wall or increasing enforcement (which is happening much slower than we’d all like)?

What’s going on? No one (officially) knows because the state databases that track all of this information are actually unavailable to the public.

This is dysfunction by design.

Here’s why: Due to the fact that everyone who receives a drivers license in California is automatically registered to vote, many non-citizens are being continually added to the voter rolls.

Moreover, thanks to a new law signed by Governor Brown, anyone can turn in an absentee ballot for another—it doesn’t even have to be a friend or relative. So Democratic activists showed up on Election Day and just dumped thousands of ballots off at the polls.

This is known as ballot harvesting, which is not being talked about nearly enough. And the problem is worse in California than anywhere else. [“Ballot Harvesting” California Dems Latest Election Stealing Tool, by Scott Morefield, Townhall, December 3, 2018]

But, needless to say, the national MSM have shown little interest in what should be a major story. Americans will never learn of it unless Trump makes it an issue.

Ballot harvesting explains why six Republican congressional candidates enjoyed a comfortable lead on Election Night 2018, but saw that lead evaporate over the coming weeks once the absentee ballots were counted. “California? Their system is bizarre,” Paul Ryan told The Washington Post. “I still frankly don’t understand it.” [Paul Ryan Isn’t Saying There Was Voter Fraud in California, But . . . , by Colby Itkowitz, Washington Post, November 29, 2019]

What Paul Ryan Republicans still fail to understand is that Social Justice Warriors are not even hiding the fact that they are engaged in demographic warfare. [It's the demographics, stupid: party loyalties are shifting as 2020 looms, by Lloyd Green, Guardian,  December 22, 2018]. And they are surely going to engage in more shenanigans in 2020, unless Trump does something about it now [Trump’s Coalition Won The Demographic Battle, It’ll Still Lose the War, by Ruy Teixeira, Vox, November 15, 2016]

The undeniable reality: California is the least democratic state in the union. No decent Californian can successfully campaign for office against the Democratic Party machine. Indeed, it’s not even a machine—California is now a Third World empire where white Social Justice Warriors wield considerable power over a diverse electorate that does not (yet) threaten their leadership.

Fortunately, while the will to resist is broken in California it still remains strong elsewhere. Why else would Americans elect a celebrity businessman President if not to save what’s left of our country?

A federal investigation of the electoral process may not save California, or win the state for Donald Trump in 2020. But it might ensure that Trump wins the rest of the country, and maybe even rescue what’s left of it.