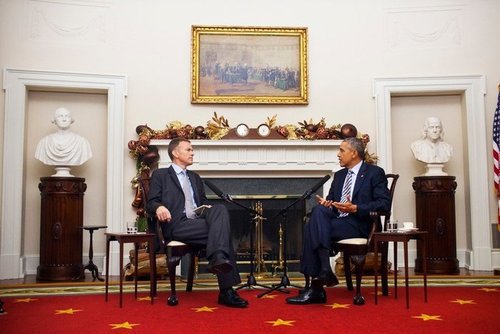 [See also“They'll Think You're Signaling”! Dog-Whistles From Goldwater To Reagan To Palin, by James Fulford ]

In an interview this morning with NPR, President Obama psychologized his white-working class antagonists:

…[W]hen you combine that demographic change with all the economic stresses that people have been going through because of the financial crisis, because of technology, because of globalization, the fact that wages and incomes have been flatlining for some time, and that particularly blue-collar men have had a lot of trouble in this new economy, where they are no longer getting the same bargain that they got when they were going to a factory and able to support their families on a single paycheck, you combine those things and it means that there is going to be potential anger, frustration, fear.

According to the President:

Some of it justified but just misdirected. I think somebody like Mr. Trump is taking advantage of that. That's what he's exploiting during the course of his campaign.

So Obama is implying that if we just enacted more redistributive big government programs, the white working class would love Third World immigrants and multiculturalism.

He made this point more explicitly in his famous speech on race when he first ran for President. Then Senator Obama noted that “Most working- and middle-class white Americans don't feel that they have been particularly privileged by their race.” Obama feigned empathy for these whites, acknowledging that

They've worked hard all their lives, many times only to see their jobs shipped overseas or their pension dumped after a lifetime of labor. They are anxious about their futures, and feel their dreams slipping away; in an era of stagnant wages and global competition… So when they are told to bus their children to a school across town; when they hear that an African American is getting an advantage in landing a good job or a spot in a good college because of an injustice that they themselves never committed; when they're told that their fears about crime in urban neighborhoods are somehow prejudiced, resentment builds over time.

Yet Obama argued that conservative talk radio hosts exploited these fears, and that

these white resentments distracted attention from the real culprits of the middle class squeeze—a corporate culture rife with inside dealing, questionable accounting practices, and short-term greed; a Washington dominated by lobbyists and special interests; economic policies that favor the few over the many.

Needless to say, Obama’s analysis is simply a camouflaged version of the old Marxist trope that capitalists impose a false consciousness on the proletariat to prevent them from asserting their true class interest.

Professional anti-racist Tim Wise  [Email him] says the same thing more crudely: "[w]hite privilege, relative to people of color, has served as the transmission belt of false consciousness" and thus "the ability of working people to form effective cross-racial coalitions. . . is itself made less likely precisely because of white racism" [F.A.Q.s, TimWise.org, Updated December 2014]

Berkeley Law professor Ian Haney-López [Email him] wrote a 2013 book with the self-descriptive title: Dog Whistle Politics: How Coded Racial Appeals Have Reinvented Racism and Wrecked the Middle Class. According to Haney-López,

Members of the middle class … typically harbor an unfounded certainty that race holds little relevance to them or their future. They could not be more wrong, for race constitutes the dark magic by which middle-class voters have been convinced to turn government over to the wildly affluent, notwithstanding the harm this does to themselves.

Yet Trump’s racial appeals are not tied to typical GOP economic policies favoring the “wildly affluent.” And in fact, the Left is finding this aspect of Trump particularly difficult to handle.

The Atlantic’s Molly Ball has contrasted “the intellectual conservative movement, a decades-long project of institutional actors like the Heritage Foundation and the American Conservative Union, which seeks to push the party toward strict adherence with a set of ideas about limited government, strong national defense, and the traditional family” with the “populist, nativist strain” in the Party. According to Ball, “Trump’s dominance of the primary field is forcing the party to confront a frightening prospect: that the populist bloc may be the bigger of the two” [‘I’m Against the Muslims’: Trump’s Supporters and the Republican Divide, Atlantic Magazine, December 8, 2015]

Michael Tomasky was less subtle, asking this loaded question in a recent column: GOP: A Neo-Fascist White-Identity Party? [Daily Beast, December 14, 2015] According to Tomasky, the GOP is

probably 97 percent white people, a significant percentage of whom are now openly embracing their racial identity; that is, they’re supporting Trump as white people, because they feel he will protect their white privilege.

While Conservatism Inc. indignantly denies these claims, there is no doubt that Republicans have successfully attracted working class whites who do not particularly care for their free-market economic policies by making cultural and implicit racial appeals. (Which are not necessarily “racist”—although never acknowledged in current debate, whites have interests too.)

But Haney-López does not consider the next question: why Republicans never deliver on their implicit racial appeals. Richard Nixon expanded Affirmative Action and busing. Ronald Reagan signed the Martin Luther King Holiday and the 1986 Amnesty into law. George H.W. Bush expanded Affirmative Action with the 1991 Civil Rights Act and massively increased immigration with the 1990 Immigration and Nationality Act. George W. Bush repeatedly risked political suicide to try to pass Amnesty, and applauded the Supreme Court’s decision to uphold Affirmative Action.

The GOP may have dog whistled to “racists”—but the dog didn’t get any treats.

The last serious candidate to break this mold: Pat Buchanan. With each of his successive Presidential campaigns, he expressed more heresies against free-market conservative orthodoxy, while taking hardline stances on immigration and racial preferences. Citing Buchanan’s support for capping executive pay, protecting Medicare, and extending unemployment benefits, National Review’s Ramesh Ponnuru proclaimed “He is in no important sense a conservative anymore.” Instead, “Buchananism is a form of identity politics for white people—and becomes more worrisome as it is married to collectivism.” [A Conservative No More: The Tribal Politics of Pat Buchanan, National Review, October 11, 1999]

Of course, until the 1965 Immigration Act—which brought in Ponnuru's parents—white people basically were America, and this "identity politics" was known as "patriotism."

Donald Trump’s deviation from conservatism are starker than Buchanan’s. Unlike Buchanan, he is not a long-time warrior in the Conservative movement or GOP. And while Buchanan became less wedded to the libertarian economics, he remained a staunch social conservative and pro-lifers were key to his coalition. In contrast, Trump opposes defunding Planned Parenthood and called homosexual marriage “the law of the land.”

Moreover, Trump has almost never campaigned on any issues related to limited government. Next to immigration control, increasing tariffs is the centerpiece of his campaign. And he criticized Ben Carson for wanting to cut Medicaid and Medicare: "I think abolishing Medicare, I don't think you're going to get away with that one. And it's actually a program that's worked. So it's a program that some people love, actually" [Trump attacks Carson: 'Ben wants to knock out Medicare', Politico, October 27, 2015]

Trump has won over the white working class by taking moderate positions on economic and social issues, while taking hardline positions on immigration, Political Correctness, and law and order. Of course, Trump gets no credit from the very same liberals who lament working class voters abandoning their economic interest to vote Republican. But he isn’t seeking liberals’ support.

Berkeley’s Haney-López, whom I suspect is more concerned with fighting perceived “racism” than helping the white middle class, either ignores Trump’s economic policies or his own book’s thesis when he says "in [Trump’s] strategic decision to pursue support, to mobilize support by appealing to people's racial fears, he's well within the tradition that has been established in the Republican Party since roughly 1963." [What social science tells us about racism in the Republican Party, by Max Ehrenfreund, Washington Post Wonk Blog, December 11, 2015]. But, as I have shown, Trump is not acting “within the tradition” of the GOP. His combination of social moderation and a hard line on National Question issues is quite new (albeit arguably presaged by Pete Wilson and Scott Brown).

Similarly, over the summer, Ben Domenech [Email him] noted that Trump’s support is “a natural outgrowth of frustrations with America’s changing demographics; the hollowing out of white working class values and culture”

At its best, these frustrations would be articulated by the Republican Party in ways that lead to more freedom and less government. At its worst, these frustrations cast aside Constitutional principles, encourage dictatorial behavior, and become the toxic political equivalent of the two Southie brothers who claimed Trump inspired them to beat up a Hispanic homeless man.

[Are Republicans For Freedom Or White Identity Politics?, The Federalist, August 21, 2015]

But Domenech failed to explain how a colorblind GOP dedicated to “more freedom and less government” would do anything to address whites’ frustration with “America’s changing demographics.”

For the last half century, the Left has framed its policies to exclude the European Americans who founded a country with a constitutionally limited government, while replacing them with non-whites who could care less about these principles. The conservative Establishment has responded with colorblind appeals to liberty and Constitution.

Donald Trump refuses to play this losing hand. And American voters are flocking to him.