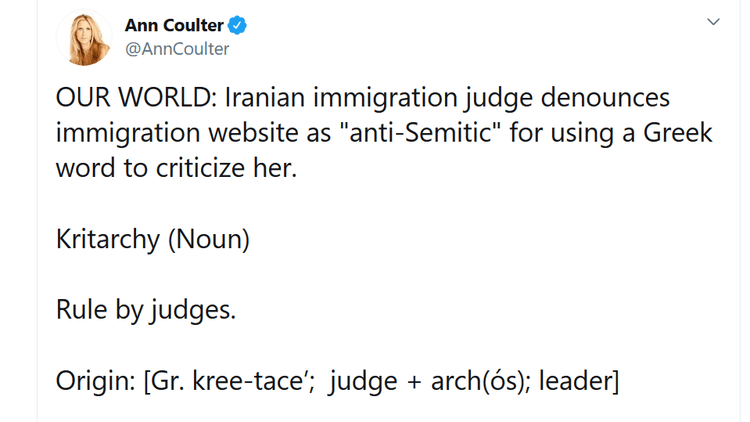 “Not Journalism, Googlism”—Kritarchy, The Lying Press, And Why Patriots Need Their Own Media

VDARE.com is enjoying one of its periodic 15 seconds of Main Stream Media infamy. The reason, as usual, is nothing to do with us—it’s just that MSM journalists/Leftist activists think they see a chance to smear the entirely innocent (if appallingly ignorant) Trump Administration. Plus, of course—and this is true regardless of politics—these millennial MSM mouthpieces are stunningly incurious and the internet has made possible a sort of echo chamber journalism in which they all quote each other, often inaccurately, with no need to get out of their e-bubble. But the real moral of this story: it is absolutely essential that patriots develop their own media networks—and fund them.

The story so far: Our pseudonymous whistleblower Federale recently blogged Bill Barr Moving To Control The Immigration "Judges" By Decertifying Their Union.

Someone in the Justice Department included Federale's blog in an internal e-roundup of immigration news because it was, you know, NEWS.

This criticism incensed immigration "Judge" Ashley Tabaddor, who by an amazing coincidence happens to be President of the Immigration “Judges” Union (they’re actually just Executive Branch bureaucrats, like insurance claims adjusters). She wrote a letter [PDF] to the director of the Department of Justice’s Executive Office For Immigration Review, James McHenry, demanding that he

withdraw the email and issue an apology to all immigration judges, including those mentioned in the post. Separately, EOIR should take all appropriate safety and security measures for all judges mentioned in this posting…

(This last sentence is, of course, part of the Left’s campaign to stigmatize all patriot dissent as potentially violent—unlike Antifa).

Incredibly—unless you know these people—Tabaddor claimed that Federale’s description of Immigration “judges” as “kritarchs” (judges who rule without regard to democratic control) was “deeply offensive and Anti-Semitic.” We immediately refuted her crazy accusation here. 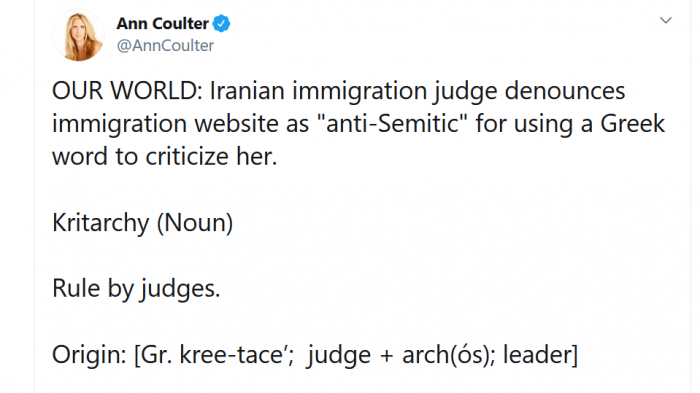 The daily EOIR morning news briefings are compiled by a contractor and the blog post should not have been included. The Department of Justice condemns Anti-Semitism in the strongest terms.

Emphasis added. In fact, of course, all self-respecting “news briefings” by definition include material from many diverse sources, even including the treasonous Cultural Marxist website site Buzzfeed, which apparently first surfaced this smear

In classic echo-chamber fashion, the Buzzfeed story has resulted in a cascade of MSM articles:

About these MSM stories:

…a few writers, for example Jared Taylor, whom I would regard as "white nationalist," in the sense that they aim to defend the interests of American whites. They are not white supremacists. They do not advocate violence. They are rational and civil. They brush their teeth. But they unashamedly work for their people—exactly as La Raza works for Latinos and the Anti-Defamation League works for Jews. [Note: Jared Taylor subsequently abandoned the term "white nationalism" as too hopelessly smeared].

You read it first on VDARE.COM—and if you don't like it, let's have an immigration moratorium now.

This is not journalism, it is Googlism. Plus, of course, a witch-hunt.

I was disgusted ten years ago when my former Canadian Financial Post colleague Patricia Best delayed contacting me until she was impossibly on deadline with her echo-chambering of a New York Times smear.

But at least, Boomer-style, she went through the motions. These swine are just basking in PC internet hog heaven.

Nevertheless, it’s a significant victory that the ancient and entirely legitimate concept of kritarchy has finally made it into public debate. As the New York Times story grudgingly says:

The VDare post described the Justice Department’s recent efforts to decertify the judges’ union. It published photographs of two judges, one of Iranian descent and one of Pakistani descent, and referred to them as “kritarch.”

That term has historically been used in a non-pejorative way to describe “rule by judges,” but more recently it has been co-opted by white nationalists and anti-Semitic extremists, according to the Anti-Defamation League.

…Aryeh Tuchman, associate director of the Anti-Defamation League’s Center on Extremism, said that “kritarchy” had long been used to describe “rule by judges.”

“There are examples throughout the course of history of societies ruled by judges, with one of the more well-known examples being the land of Israel as described in the Biblical books of Joshua and Judges,” he said in an emailed statement on Friday.

But he added that it appeared that extremists, “mainly confined to the racist, anti-immigrant site VDare, have co-opted the term to refer to liberal American judges as ‘kritarchs’.”

That reference is used to convey their “displeasure and belief that these judges are acting independently and without accountability to a form of government — mainly as it pertains to social issues, specifically immigration,” Mr. Tuchman said.

“Many of the extremists on VDare who use this term are in fact anti-Semites, and they may intentionally be using ‘kritarch’ as a way to express their anti-Semitism, but on its own, the term is not self-evidently anti-Semitic,” Mr. Tuchman said.

Emphasis added. In other words, the term “kritarchy” is technical, not anti-Semitic, but Tuchman [Tweet him] is too much of a jerk to admit it.

The VDare post on Monday also used the word Lügenpresse, which was used by the Nazis to describe what they called the “lying press.”

On Thursday, after the uproar over the news briefing began, VDare wrote on its website that the word “kritarch” meant only “rule by judges” and that it was “strange” that Judge Tabaddor believed the term was meant to be anti-Semitic.

That would have been a good place to link to our post. But apparently that wasn’t News Fit To Print.

Also, the word "lugenpresse" has been used in Germany from 1848.

And guess what? The MSM is still the Lying Press.