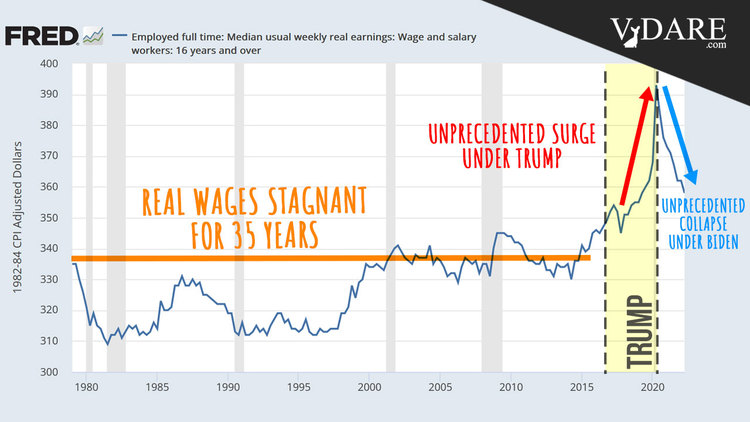 A funny thing happened to the usual cheerleading that greeted the June job report [U.S. Economy Added 372,000 Jobs in June, Defying Slowdown Fears, by  Lydia DePillis, NYT, July 8, 2022]. In fact several funny things: a continued Biden Rush at the southern border; record inflation numbers; and (despite the New York Times’ headlined prediction) a “slowdown” that everyone knows would be called a recession if the GOP were in power [GDP fell 0.9% in the second quarter, the second straight decline and a strong recession signal, by Jeff Cox, CNBC, July 28, 2022]. But the cheerleading was misplaced anyway, because as usual it missed the extent to which immigrants (legal and illegal, government data does not distinguish) are taking native-born Americans’ jobs.

According to the widely cited Survey of Employers, the economy added back 372,000 jobs in June. Average hourly earnings rose a 5.1% year-over-year [Y-O-Y], a level that in most years would translate to large real income gains. Unfortunately, with the latest CPI inflation running at 9.1%, Y-O-Y, average incomes are still falling behind in real, inflation-adjusted, dollars. 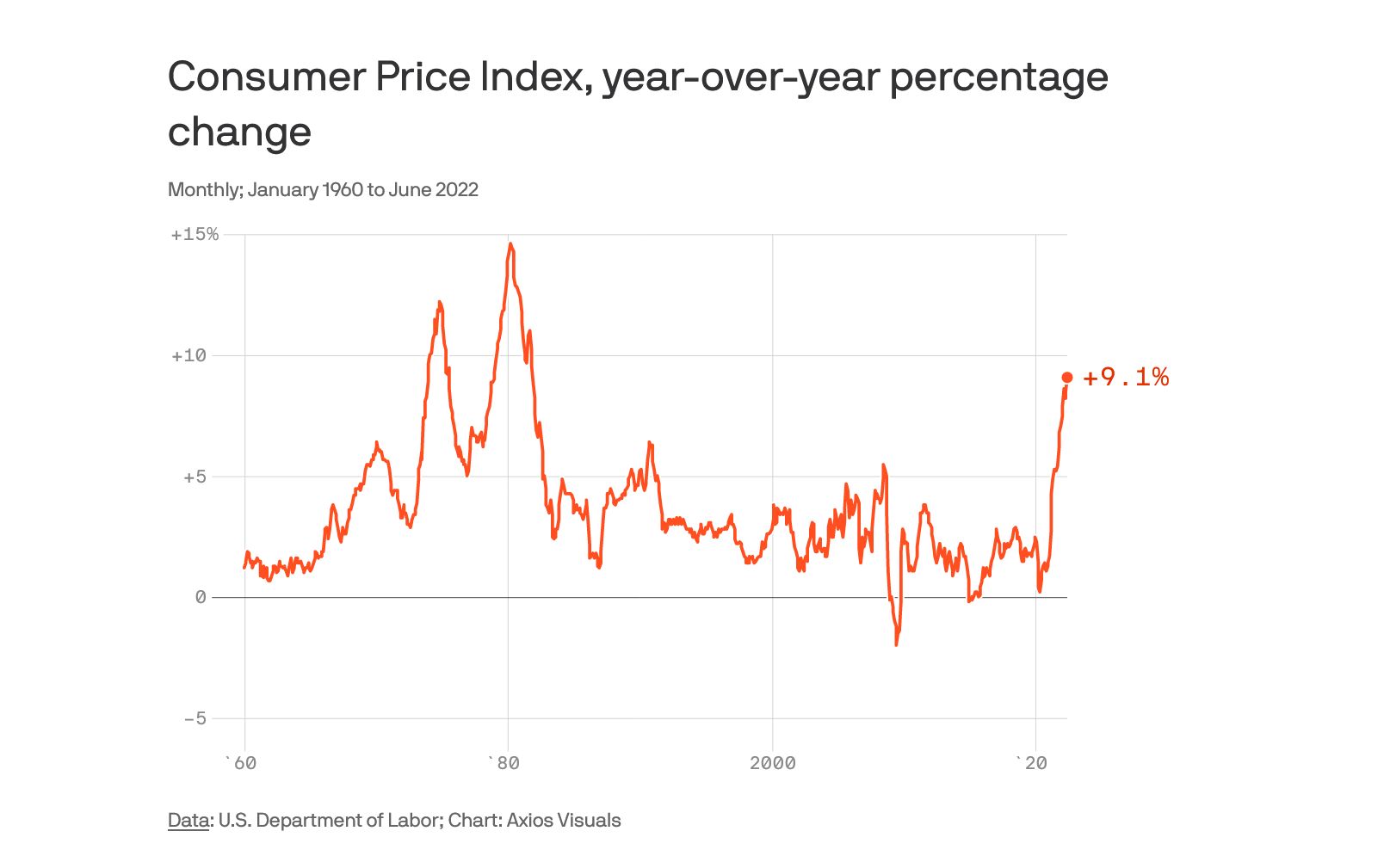 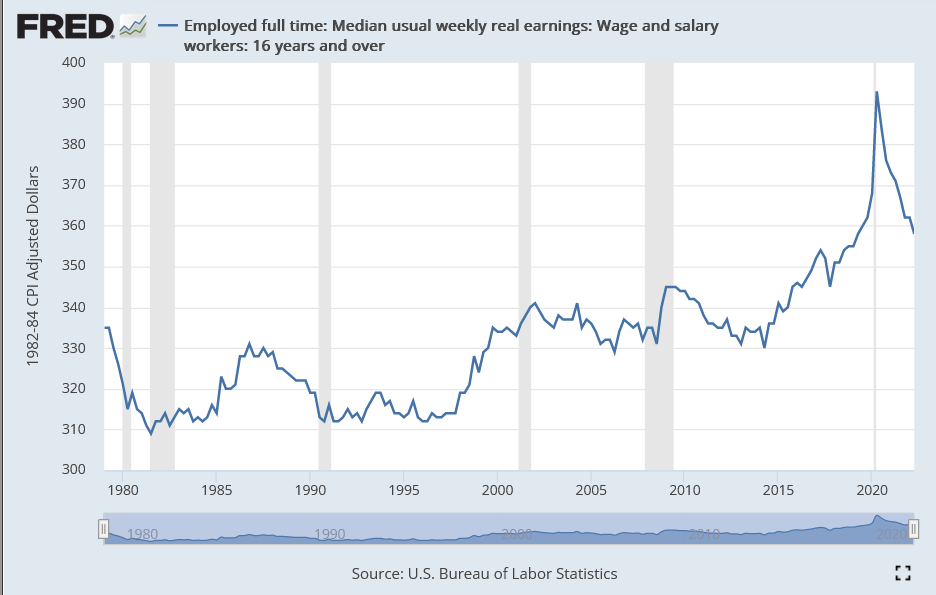 Underlying this wild gyration: the fact that, under Trump, the immigrant workforce population actually began falling significantly—before bouncing back under Biden.

Thus, in contrast to the Trump trend, in June 2022, despite 1.056 million immigrants reported as unemployed, the foreign-born working-age population expanded by more than 2 million year-over-year for the second consecutive month. May and June of 2022 were the first consecutive months of 2-million plus immigrant workforce growth in the past 15 years.

Note carefully what this chart shows. Unlike our other charts, which show absolute values, this one compares each month to the same month of the prior year. So the immigrant workforce population grew by 2.058 million in June compared to June 2021. The corresponding increases for March, April, and May, compared with the same months in 2021, were 1.397 million, 1.970 million, and 2.361 million, respectively.

For most of 2020, the population of working-age immigrants declined Y-O-Y. This far exceeded the net exodus during the 2008 Great Recession, and the brief net exodus during Trump’s first year, when his mere presence seemed to have jawboned illegals into fleeing.

The immigrant population of working age started growing again only in December 2020—when Biden’s election spurred a renewed invasion.

The Biden Rush must exert a downward pressure on wages. But additionally, apprehensions on the southwest border were above 200,000 for the fourth consecutive month:

Some recession-deniers point to the continuing job growth reported in June. But employment is typically a lagging indicator of economic conditions.  And the “other” employment survey, of Households rather than Employers, is already flashing red. The Household Survey showed total employment declining by 315,000 in June, according to our analysis.

However, contrary to the major trend dating back to the Obama Administration, our analysis also shows that in June native-born American workers gained jobs, while immigrants lost them:

The New VDARE American Worker Displacement Index (NVDAWDI), our name for the ratio of the immigrant to native-born American employment growth indexes since Jan. 2009, fell to 121.1 in June, a 1.54% reduction from the record level (123.0) set in May.

Another displacement metric—the immigrant share of total employment—also retreated from the peak reached in May. Our analysis indicates that 17.847% of jobs were held by immigrants in June, down 1.4% from May’s 18.089%.

But May’s reading was the highest since we started tracking employment by nativity in January 2009.

In June the Household Survey reported 158.1 million people held jobs in the U.S. Each 1% rise in immigrant employment share represents a transfer of about 1.58 million jobs from native-born Americans to immigrants.

A more detailed longer-run picture of how native-born American workers fared over the past year vis-à-vis immigrants is published in Table A-7 of the monthly BLS Report:

(This data is from the Survey of Households, which includes self-employed workers, agricultural workers, and private family workers, who are excluded from the Payroll Survey. Also overlooked, we contend, are illegal immigrants working “off the books” in large corporations.)