Donald Trump’s recent speeches  [PDF] challenging Hillary Clinton’s claim to the black vote are clearly rattling the Democrats/ Main Stream Media complex e.g. [It’s hard to imagine a much worse pitch Donald Trump could have made for the black vote, by Philip Bump, Washington Post, August 20, 2016]…perhaps because it might be working [Shock Poll: Trump’s Black Support Grows 6X in Week, by Neil W. McCabe, Breitbart, August 18 2016], at least with whites [Trump’s Appeal to Black Voters Was Actually Directed at White Voters, by Ed Kilgore, New York Magazine, August 17, 2016]. Bottom line: looking at the data, Trump is on to something.

Seven and one-half years into the first Black POTUS, Blacks should be taking stock of where he has taken them. This is important not only for historical purposes, but as an insight into where they are likely to be if Hillary Clinton should be elected for what will likely be a de facto third term of Obamanomics.

The picture is quite, well, black. Based on the Obama Administration’s own latest available statistics, Black Americans are worse off today than they were on Inauguration Day 2009. Real, inflation adjusted, median income among Black households sank from $35,954 in 2009 to $35,398 in 2014—a fall of 1.5%. 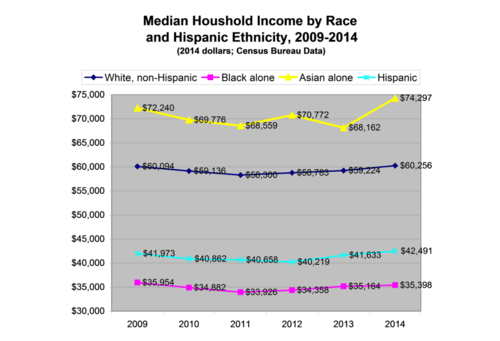 It is impossible to overstate the significance of median household income. It reflects the sum of all income and cash transfer payments coming into the median household. Unlike average income, median income is not influenced by the share of income going to the very wealthy or the very poor. It is the most representative income figure available.

Also important: poverty rates—they take into account income as well as the number of people living in households. (The “poverty line” for a large household is higher than that of small or single-person household.) As seen in the chart, poverty rates for Blacks and Hispanics are considerably above those of Whites and Asians: 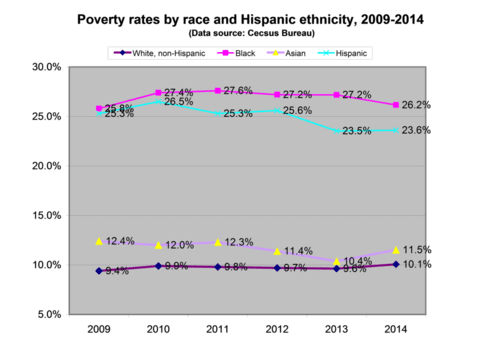 Interestingly, the white poverty rate also increased over this period – from 9.4% to 10.1%. Increased poverty among low-income working class whites undoubtedly fuels much of their enthusiasm for Donald Trump’s campaign.

To the extent that Hispanic immigrants are displacing Black Americans in the work force, a Trump Administration would do a better job of lowering Black poverty than one headed by Hilary Clinton, who proposes to rush through “comprehensive immigration reform”—an Amnesty/ Immigration Surge.

The one bright spot seems to be Black unemployment rate—sort of: 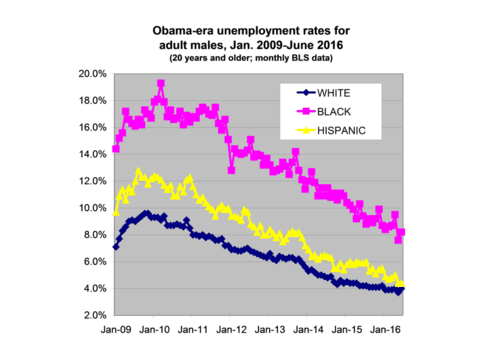 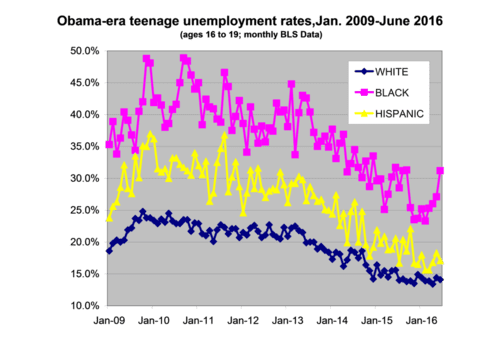 Why? Sometimes a rising unemployment rate can be viewed as “good news” – e.g., when increased employment opportunities draw more people into the labor force. This is not the case here: the number of Black teenagers working fell 4.0% between November 2015 and June 2016. Over the same period the number of white and Hispanic teenagers working rose 4.2% and 6.8%, respectively.

Something uniquely bad is happening to Black teenagers in Barack Obama’s last year. They are being shut out of the job market. Unquestionably, many are being displaced by immigrants—my reading of the data suggests a new illegal surge may be underway.

The Black economic malaise goes beyond jobs, income, and poverty. The Urban League’s 2016 State of Black America report calculates the Black-white divide for more than 40 economically sensitive categories. It found, for example, that the home ownership rate for Blacks, 43%, was only 59% of the white rate. Median wealth for Blacks, $6,314 was only 6% of the white median ($110,500); only 11.2% of Blacks invested in IRAs compared to 35.4% of whites. Sixty-eight percent of Black households had internet    versus 83% of white households. The car ownership rate for Blacks, 70.5%, is 80% of the white rate (88.3%).

Summarizing all the economic variables in its report, the Urban League finds that the Black-White economic equality index has slipped from 57.4% in 2009 to 56.2% in 2016.

In other words, Blacks have fallen further behind Whites during the Obama years.

Can an Urban League endorsement of Donald Trump be far behind?