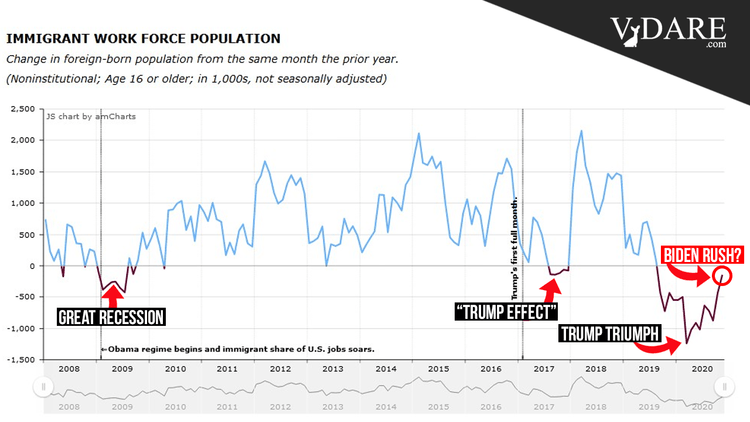 As predicted, the “Biden Rush” looks like it’s getting underway. The November jobs data showed the Immigrant Workforce population, legal and illegal, falling for the 15th straight month year-over-year, the most dramatic contraction for many years, which we call the “Trump Triumph” on our featured charts. But it’s slowing. And other measures of American worker well-being vs. immigrants are also reversing. Some of this must be due to the economy’s recovery, even if fitful, sucking in foreign workers. However, it may also the mirror image of the “Trump Effect,” by which illegal immigrants began to leave even before any restrictive measures have been enacted.

The economy regained only 245,000 jobs in November, according to the headline-grabbing survey of business payrolls. The increase fell short of the 432,000 consensus forecast among economists. November marked the fifth straight month of slowing job gains in a period of rising COVID infection and fatality rates.

The unemployment rate, meanwhile, fell from 6.7% from 6.9%—making a new pandemic low. But this “good news” was more apparent than real, as it reflected 400,000 people dropping out of the labor force because they couldn’t find work or had to care for home-schooled children or sick relatives.

Since September, the number of workers unemployed for 27 weeks or more is up by a remarkable 1.5 million—a 64% increase.

That is particularly bad news for optimists looking for a quick rebound, perhaps one fueled by a vaccine by the end of 2021. Remember the old saying, that it’s easier to get a job if you are employed than if you are not. Lengthy spells of unemployment are far harder to overcome than temporary layoffs. It took years to revisit peak employment levels after the economy tanked in the Great Recession of 2008-09.

Meanwhile, the “other” employment survey, of households rather than businesses, was grimmer still. Total employment declined, immigrants gained jobs, native-born Americans lost them.

This means that the New VDARE American Worker Displacement Index (NVDAWDI), our name for the ratio of immigrant to native-born American employment growth indexes since Jan. 2009, rose to 114.7 from 110.3 in October.

Bottom line: November saw a big spike in American worker displacement. Not since March has VDARE.com’s Displacement Index been this high.

Displacement is, of course, a relative term. It measures immigrant job growth relative to that of American native-born workers. Thanks, in part, to Trump’s (relatively) hard line on immigration, expressed basically via administrative measures, the Trump years saw a labor market where native-born Americans first held the line and then, in the COVID contraction, lost relatively fewer jobs than immigrants.

That was not what Trump supporters had in mind in November 2016. But it was something. Now, after a dismal November, even that “something” has shrunk drastically.

From the start of the Trump Administration (January 2017) through November 2020, native-born Americans lost 1.926 million jobs, a 1.53% decline, while immigrants lost 423,000, a 1.63% reduction. So if native-born workers were to evaluate the economy today on how they did relative to immigrants during the Trump years, it would still be a positive judgment—albeit barely.

By comparison, the same calculation a month ago showed a decisive advantage for native-born workers. The percentage job losses suffered by native-born American workers from Trump’s inauguration through October were less than one-quarter of those endured by immigrants over that period.

The November numbers are based on employment numbers in the week of November 8 to 14. Since then coronavirus infections have risen, and the weather has turned colder. December unemployment could well be worse.

Our analysis of the November report shows the immigrant share of total employment rose to 17.07% from 16.53% in October. After some gyrations, it had been falling steadily before the pandemic started. In February 2020 immigrants held 17.53% of all jobs.

Each 1% decline in immigrant employment share represents a transfer of about 1.5 million jobs from immigrants to native-born workers.

Perhaps the most troubling news for immigration patriots: as discussed above, November saw a significant decline in the rate at which working-age immigrants are leaving the country. The Immigrant Workforce Population fell by just 146,000 from last November, a fraction of the 435,000 net loss reported in October. In September, by contrast, the Immigrant Workforce population fell by 875,000 from the same month of last year.

The average monthly decline in immigrant workers during the 15 month-long “Trump Triumph” was more than double what we saw in the 2008 Great Recession. Back then, immigrants were leaving at the rate of 300,000 to 400,000 a month, year-over-year.

And of course, it dwarfs the brief decline seen earlier in the Trump Administration

By further flushing out immigrants, COVID-19 apparently accentuated an America-First trend already underway for some time.

Trump had a great opportunity: He could have locked in the recovery’s benefits for the American worker—and stemmed recent immigration’s damage to the GOP—if he had acted on his instincts and campaigned on extending his temporary immigration moratorium.

But Trump missed the chance to make this point. Now his achievements may be overwhelmed by the Biden Rush.

No less a source than Joel Kotkin (!), in no less an outlet than the Daily Beast (!!), just wrote:

…Donald Trump got some big things right, politically and practically, that Joe Biden will undo at his own peril. Almost all of Trump’s wins, abroad and at home, have one thing in common: They focused on most Americans achieving broader prosperity and not only the best-off. In his first three years, through a powerful economic boom, Trump’s economic approach paid dividends for working-class voters, who enjoyed their fastest income growth in a generation.

The Big Thing That Trump Got Right and Biden Can’t Afford to Screw Up Again,  December 7, 2020 Links in original

Restricting immigration was certainly part of “Trump’s economic approach.” But every sign is that Biden plans to unleash another immigration disaster.