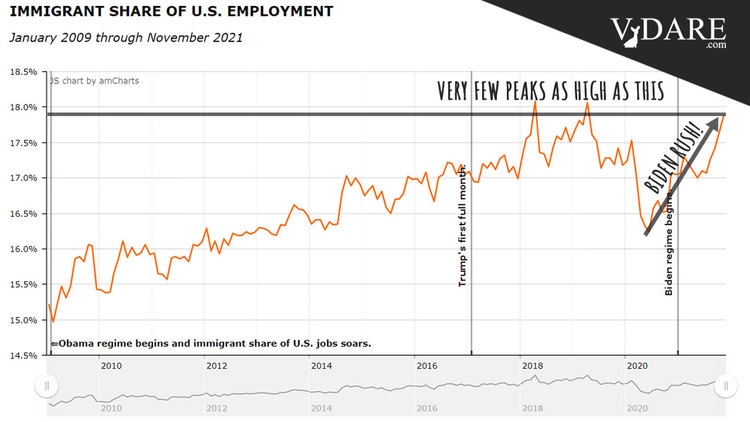 American employers reported weaker than expected payroll growth last month. But the survey of American households showed a surge in the number taking jobs—with—surprise, surprise—immigrants gaining them at a rate far greater than natives.

The survey of employers showed the addition of just 210,000 jobs in November, the year’s weakest showing. Economists had forecast a second straight gain of more than 500,000.

But good news—for immigrants anyway—abounded in the household survey, which showed that the total number employed, seasonally adjusted, jumped by more than 1.1 million. The unemployment rate fell to 4.2% from 4.6%.

“I don’t know that I’ve ever seen such an extraordinary gap between the two surveys,” said Diane Swonk, chief economist for the accounting firm of Grant Thornton in Chicago [Stocks slide again after the jobs report sends mixed signals on the economy, New York Times, December 3, 2021].

Ms. Swonk is obviously not a VDARE.com reader. We have long noted that the survey of employer payrolls misses non-traditional workers—people selling things on CraigsList, working off-the-books, and…illegal immigrants. Last month’s data confirms the undercount, with payroll employment coming in at 148.6 million versus 155.2 million for Household Survey, both seasonally adjusted.

Our analysis of the November Household Survey finds:

This means that the New VDARE American Worker Displacement Index   (NVDAWDI), our name for the ratio of immigrant to native-born employment growth indexes since January 2009, rose to 121.3 from 119.3 in October, a 1.62% increase.

American Worker Displacement, as measured by NVDAWDI, was  considerably higher in November (121.3) than it was when Donald Trump was inaugurated in January 2017 (114.8) After wild gyrations during his Administration, it finally fell, partly because of the pandemic, and partly because of his Executive Actions. In the months immediately after Biden’s inauguration it stabilized, but with the waning of the pandemic, immigrant workers surged back. While NVDAWDI has risen every month since July, October and November saw the largest spikes. This trend could signal a run of ever grimmer months for native-born American workers.

A resumption of the relentless increases of the Obama years now seems underway. Despite 1.043 million immigrants reported as unemployed in November, the foreign-born working-age population expanded by more than one million, Y-O-Y, for the third straight month:

Note carefully what this chart shows. Unlike our other charts, which show absolute values, this one compares each month to the same month of the prior year. So the immigrant workforce population grew by 1.318 million in November 2021 compared to November 2020. The corresponding increases for August, September, and October were 849,000, 1.301 million, and 1.558 million, respectively. These are huge increases.

For most of 2020, the population of working-age immigrants declined Y-O-Y. This far exceeded the net exodus during the 2008 Great Recession, and the brief net exodus during Trump’s first year, when his mere presence seemed to have jawboned illegals into fleeing.

Another displacement metric—the immigrant share of total employment—also rose to levels not seen since before the pandemic.

Our analysis shows that 17.878% of jobs were held by immigrants in November. Not since April 2018 has the immigrant share been above the level reached last month.

Note that, after some gyrations, the immigrant share of employment had been falling steadily even before the pandemic started. But, again, the Trump gains have been wiped out and the immigrant share will resume its Obama-Era upward march—unless the political climate changes again.

But inflation is erasing most, if not all, of the nominal wage gains. The government's latest report on personal consumption prices (it is for October) showed an increase of 4.1%, year-over-year—the most in three decades.

The ambiguous BLS employment data muddles the calculations of Federal  policymakers weighing whether to shift their focus from creating jobs to reining in prices. It is a complication for a White House trying to show the success of its economic course. And it offers little guidance to businesses about what to expect in the months ahead.

There is no shortage of spin doctors. Biden supporters see “silver linings” in the dismal Payroll Survey job creation number, to wit: employers are too busy looking for workers to respond to the survey. (To be sure, in recent months there has been an abnormal number of “upward revisions” to the payroll numbers. But this does not affect displacement.)

Much has changed since Alan Greenspan (Federal Reserve Chairman 1987-2006) anointed the Payroll Survey as the most dependable of the two surveys back in the 1980s. Job growth is no longer the exclusive province of big business. Mom and Pop is making a big comeback in this pandemic, a trend which, if it persists, could elevate what we have long called the “Other” survey—the one where worker nativity is recorded—to simply “the” survey.

No longer will policymakers have an excuse to ignore the invasion.