National Data | Looking (in vain) for "Jobs Americans Won't Do"

When unveiling his guest worker proposal, President Bush urged Americans to "legalize the process of people doing jobs Americans won't do." Illegal immigrants, in this view, are essential to the country's economic growth.

As I have shown before, nothing could be further from the truth.

Yet illegals make up only 13% of hotel industry workers, 11% of restaurant and food service workers, and 10% of construction workers. Clearly millions of Americans are doing precisely the same jobs, and countless others were working in these fields before being displaced by foreign-born workers.

Admittedly, these are blue collar jobs requiring little in the way of education or special skills. Yet literally millions of unlettered, unemployed natives are available to fill those slots. In 2004: (Table 1):

Illegal aliens work for less, are less likely to have medical insurance, and are often paid "off the books." They are a boon for all manner of employers, ranging from the neighborhood tree service to Wal-Mart.

I examined the relationship between foreign worker penetration (i.e., the percent of workers that are foreign-born) and wages in particular industries. The industry with the largest foreign-born share (38.3%) in 2004 was "Other services, private households"—a category that includes cleaning girls, nannies, gardeners, etc., while the smallest penetration (2.8%) was in "Agricultural, self-employed"—farmers who own their land. These figures reflect legal and illegal immigrant workers in each industry. 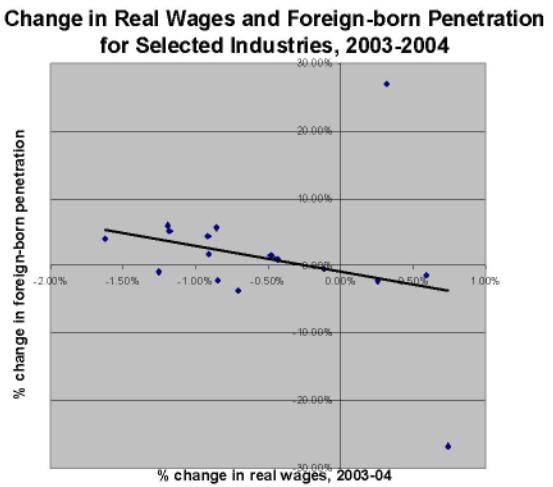 In a word: the data confirm the notion that increased foreign worker penetration brings lower wage and income gains.

There is no dearth of American workers—just wages and working conditions that sink lower with each immigrant wave.