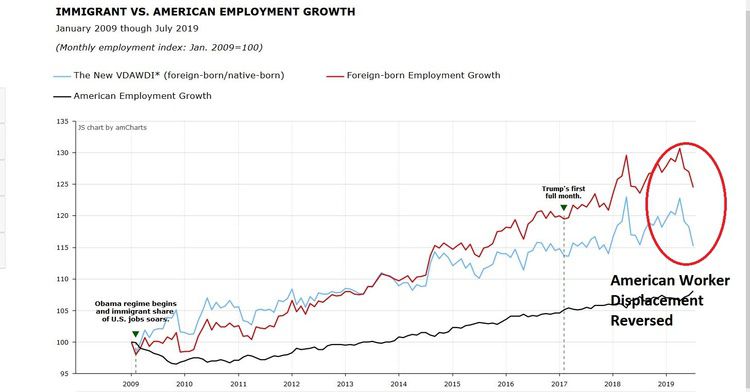 The U.S. added 164,000 new jobs last month, in line with expectations, albeit well below the (revised) 201,000 figure for June. The “other” employment survey, of Households rather than businesses, was in broad agreement, reporting a July gain of 283,000. The big news: For the third month in a row, native-born Americans gained jobs while immigrants lost them—a remarkable string of reverse displacement that just possibly might amount to a trend.

This happy state of affairs was aided, in part, by a reduction in illegal border crossings. The latest available Border Patrol apprehension figures are for June, and they indicate a substantial drop from May.

June apprehension declines are not at all unusual. Nearly every summer since 2000 has seen similar declines. The one exception: the short-lived “Trump Effect” in 2017, when illegal border crossers moved up their crossing dates to before his inauguration, and others stayed away until they realized that he had not been able to make significant changes.

A seasonal pattern is at work: Higher temperatures make the crossing more dangerous. But this year’s June decline was particularly sharp. The average May-June decline over the period 2000 to 2019 was 20%; the decline in June 2019 was 29%.

Trump’s trade policies may be a major reason for the oversized decline this June. To make good on a trade deal Mexico signed with the U.S.—and avert U.S. tariffs that would have destroyed much of Mexico’s economy—the Trump Administration essentially forced that country to deploy more than 20,000 security forces throughout the country’s southern and northern border states.

What happens when the weather cools? Or Mexico loses interest in deploying troops along the border? Stay tuned.

What about American worker displacement? Remarkably, for the third consecutive month, our analysis reveals native-born Americans gaining positions while immigrants were losing them.

While American Worker Displacement fell last month, it still ranked ninth highest among the 127 months we’ve tracked since January 2009. The all-time displacement high, 123.0, was set in April of last year—well into Trump territory.

(Note that the previous July also saw a significant decline in American Worker Displacement. So there may be seasonal factors at work in the May to June period that obscure longer-term trends.)

The long term trend remains clear: Native-born American workers lost ground to their foreign-born competitors throughout the Obama years; this accelerated significantly in the months leading up to the 2016 election.

More than half-way through his first term President Trump has not yet fully reversed this trend. In recent months, however, there has been a dramatic reduction in the rate at which native-born American workers are being displaced by immigrants.

From January 2017 through July 2019, Trump presided over a labor market in which immigrants gained 965,000 jobs, a 3.7% increase, while native-born Americans gained 4.2 million, a rise of 3.4%. But the percentage gap in job creation—a mere 0.3 percentage points in favor of immigrants—is now strikingly low.

As recently as April of this year the immigrant job growth advantage under Trump was 7.1%; they gained 2.3 million jobs, an 8.9% rise, while native-born Americans gained 2.264 million, a rise of 1.8%.

At this rate we will soon have to abandon our tag line: “As far as job growth is concerned, ‘America First’ has not translated into Americans First.” Trump will have at least have halted the displacement trend.

Immigrants held 17.14% of jobs in July, down from 17.52% in June and 17.61% in May, but slightly above the 17.16% share of last July. These numbers are not seasonally adjusted, so year-over-year comparisons may be more representative of the long-term trend. The record immigrant job share (18.08%) was recorded in April 2018.

While immigrants accounted for “only” 16.5% of the U.S. working-age population in July 2019, nearly one-third (32%) of the year-over-year gain in this population was foreign-born.

Bottom line: This is a formidably strong economy and it has been swamping the effects of immigration. The last few months have been especially good for native-born workers. Their share of total employment has increased, though it remains slightly below what it was when Donald Trump took office.

We are frankly baffled why Americans are suddenly reclaiming their job patrimony. No single policy change that has been implemented (as opposed to proposed) seems significant enough to account for it. But the phenomenon has gone on for long enough that it must be acknowledged. Should it continue, political victory for the Republican ticket becomes ever more likely in 2020.

Of course, it might not continue. We continue to think that over the long haul, only legislation can protect American workers from displacement and wage depression.

And has everyone forgotten that the current immigration-driven demographic drift is suicidal for the GOP?