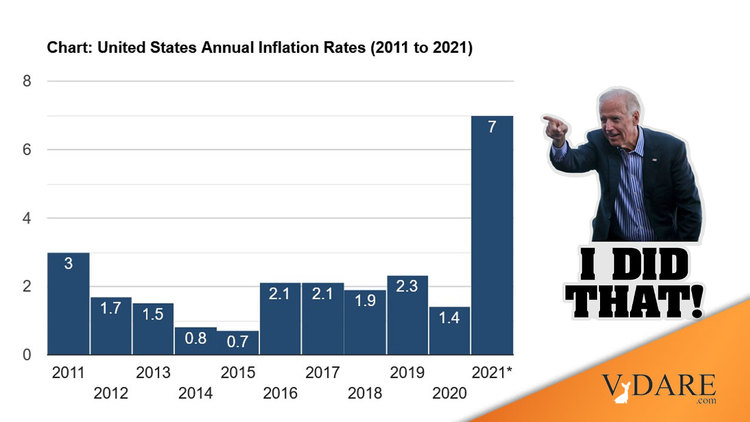 But despite the miss on headlines, the seasonally adjusted unemployment rate improved more than expected to 3.9%—the best level since February 2020’s 50-year low of 3.5%.

How can weak job growth coexist with sharp declines in unemployment? Labor force gurus are finally questioning the validity of the Payroll Survey, long deemed the Holy Grail of monthly job reports: "While the 199,000 gain in non-farm payrolls once again disappointed the consensus, a much larger gain in the household measure of employment and a tepid rise in participation pushed the unemployment rate back below 4%," Michael Pearce, senior U.S. economist for Capital Economics, wrote in a note on Friday [December jobs report: Payrolls rise by 199,000 as unemployment rate falls to 3.9%, by Emily McCormick, Yahoo Finance, January 13, 2022].

Mr. Pearce obviously is not a VDARE.com reader. For years, we have noted problems with the Payroll Survey. It consistently reports a total U.S. employment figure that is millions below that reported in the Survey of Households. Our contention: U.S. businesses are reluctant to acknowledge illegals on their payrolls—very much a factor in the undercount.

So no VDARE.com reader should be surprised that the December Household Survey reports a monthly employment gain of 651,000—a figure three times larger than the job growth reported in the Payroll Survey.

The Household Survey now reports December’s job growth by nativity. So December’s data, calculated exclusively by VDARE.com, was as follows:

Bottom line: VDARE.com’s displacement metric fell a bit last month. But the underlying trend is unbroken—despite 1.069 million immigrants reported as unemployed in December, the immigrant workforce population expanded by more than one million for the fourth straight month:

Note carefully what this chart shows. Unlike our other charts, which show absolute values, this one compares each month to the same month of the prior year. So the immigrant workforce population grew by 1.225 million in December 2021 compared to December 2020. The corresponding increases for October and November were 1.558 million, and 1.318 million, respectively.

For most of 2020, Trump’s last year, the population of working-age immigrants declined year-over-year. This far exceeded the net exodus during the 2008 Great Recession, and the brief net exodus during Trump’s first year, when his mere presence seemed to have jawboned illegals into fleeing.

Another displacement metric—the immigrant share of total employment—also rose to levels not seen since before the pandemic. Our analysis shows that 17.781% of jobs were held by immigrants in December. Not since February 2019—when foreign-born workers held 17.812% of all jobs—has the immigrant share been above the level reached last month.

As worker demand remains elevated, nominal wages have also risen. Average hourly earnings rose for the ninth straight month, increasing by 0.6% in December compared to November. Average hourly wages rose by 4.7% over last December vs. 4.2% expected and a revised 5.1% on November, as reported by Emily McCormick above.

But inflation has eroded most, if not all, of the nominal wage gains. The government's latest report on CPI inflation (it is for November) showed an increase of 6.8%, year-over-year—the most since June 1982.

The US Inflation Calculator Page, more recently, makes it a straight 7 percent. 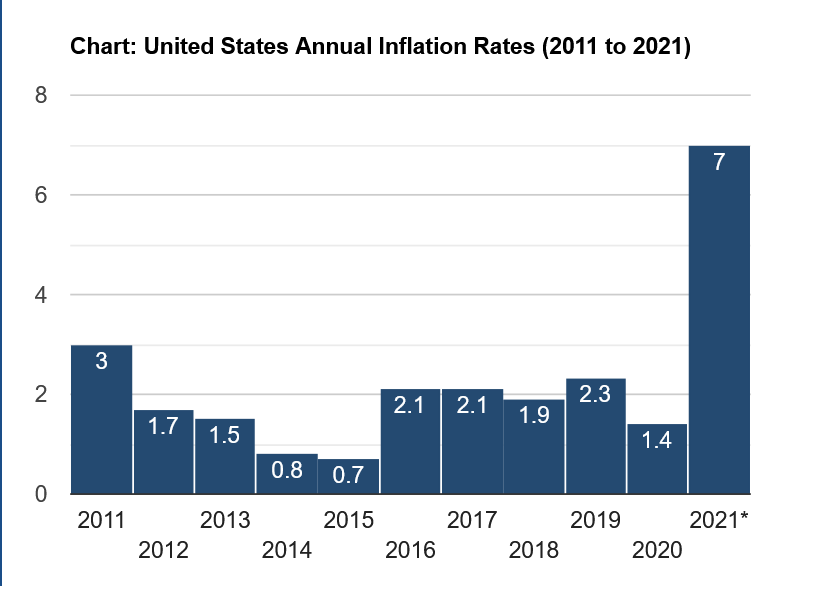 Slackening job growth is especially worrisome because the latest BLS data was collected in mid-December, before the pandemic’s latest wave.

But that’s not stopping the immigrant influx. Immigrant Displacement of American workers is now back above Obama-Era levels. Look for it to go higher.