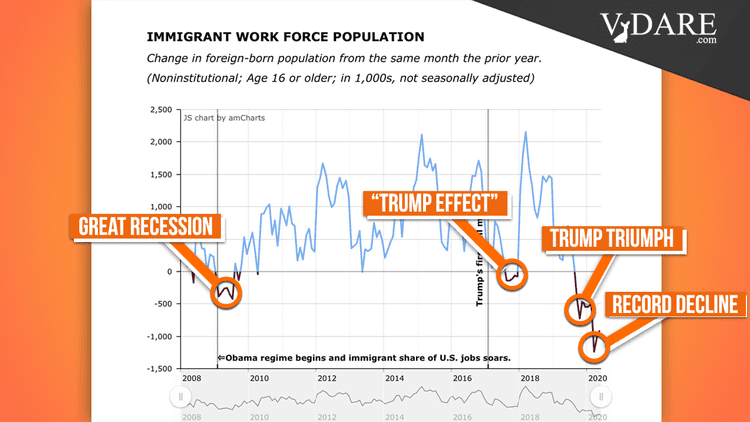 It’s an ill crash that blows no-one any good. The U.S. job market unexpectedly sprang to life in May as employers added 2.5 million jobs and the unemployment rate plummeted. It was, by a gigantic margin, the biggest payroll surprise in history. But even more significantly from VDARE.com’s point of view, the immigrant workforce population has continued to fall, and immigrant displacement of American workers is back down to levels not seen since way back in the Obama Administration. This presents Donald Trump with a great opportunity: he can lock in the recovery’s benefits for the American worker — and stem recent immigration’s damage to the GOP — if he acts on his instincts and imposes an immigration moratorium.

Our analysis of the “other” employment survey, of Households rather than businesses, uncovers an even more robust picture: Total Household employment jumped by 3.8 million in May. If monthly job gains continue at this rate, we will recover all the pandemic-related job losses within 6 months.

Accordingly, the New VDARE American Worker Displacement Index (NVDAWDI), our name for the ratio of immigrant to native-born American employment growth indexes since Jan. 2009, fell to 108.6 in May, a decline of 1.1% from April’s 109.8.

Not since July 2013 has VDARE.com’s Displacement Index been this low.

Displacement is down partly because immigrants are leaving in record numbers, and because those who remain are losing jobs at even faster rates than native-born Americans.

A bittersweet benefit of  Covid-19 catastrophe: In percentage terms, job losses suffered by native-born workers during Trump’s tenure are now less than those endured by immigrants. From January 2017 through May 2020 native-born Americans lost 11.25 million jobs, an 8.9% decline, while immigrants lost 3.59 million, a 13.8% reduction.

Thanks, in part, to his (relatively) hard line on immigration, expressed basically via administrative measures, the Trump years saw a labor market where native-born Americans lost relatively fewer jobs than immigrants.

May also saw another near record year-over-year decline in the foreign-born working-age population (16 years+). It fell by 912,000 from May 2019—the ninth straight month of year-over-year decline. This contraction follows a protracted slowing of immigrant workforce growth that can be traced back to early 2018.

This process was underway well before the pandemic hit. It has to be counted as a significant Trump achievement—a “Trump Triumph,” as we label it on our featured chart.

A detailed picture of how American workers have fared vis-à-vis immigrants over the past year is published in Table A-7 of the monthly BLS Report:

President Trump displayed his usual humility: “This is better than a V,” he proclaimed. “This is a rocket ship!” “We’ll go back to having the greatest economy anywhere in the world,” he said from the Rose Garden [Unexpected Drop in U.S. Unemployment Helps Markets Rally, NYT, June 5, 2020 Updated June 8, 2020].

Warning to DT: The benefits of that “greatest economy anywhere in the world” will go to immigrants from everywhere in the world, as in the rebound from the 2008 Great Recession, unless they are channeled to American workers via an immigration moratorium NOW.

More evidence: illegal immigration on the southern border has started to pick up:

But it’s all the more reason for a moratorium on legal immigration — and, of course, a wall.