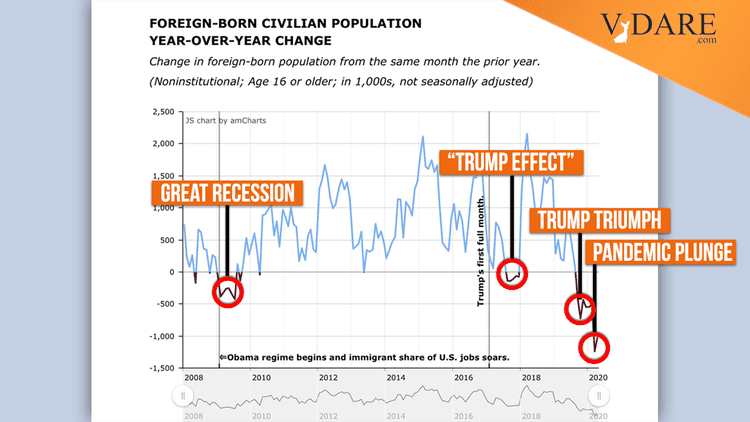 The U.S. economy lost 21.5 million payroll jobs in April as the unemployment rose to 14.7%, the worst since the Great Depression. But immigrants (legal and illegal—federal data doesn’t distinguish) lost most ground. Now more than ever, the immigration moratorium hinted at by President Trump is essential to ensure that the benefits of recovery accrue to American workers,

Our analysis of the “other” employment survey, of Households rather than businesses, finds total employment shrank by 22.4 million in April, the largest monthly decline since the government began publishing official job statistics at the end of World War II.

Note, however, that native-born American workers fared relatively well—i.e., they did not suffer quite as much—as their foreign-born counterparts.

Not since July 2014 has VDARE.com’s Displacement Index been this low.

Displacement is down, largely because immigrants are leaving in record numbers, and those that remain are losing jobs at even faster rates than native-born Americans.

A bittersweet benefit of  Covid-19 catastrophe: In percentage terms, job losses suffered by native-born workers during Trump’s tenure are now less than those endured by immigrants. From January 2017 through April 2020 native-born Americans lost 14.67 million jobs, a 11.6% decline, while immigrants lost 4.01 million, a 15.4% reduction.

Thanks, in part, to his (relatively) hard line on immigration, expressed basically via administrative measures, the Trump years saw a labor market where native-born Americans lost relatively fewer jobs than immigrants.

Each 1% decline in immigrant employment share represents a transfer of 1.3 million jobs from immigrants to native-born workers.

April also saw another near record year-over-year decline in the foreign-born working-age population (16 years+). It fell by 1.23 million from April 2019—the eighth straight month of decline. This contraction follows a protracted slowing of immigrant workforce growth that can be traced back to early 2018.

Note that this process was underway well before the pandemic hit.

It has to be counted as a significant Trump achievement—a “Trump Triumph," as we label it on our featured chart.

Simultaneously, apprehensions on the Southwest Border, a proxy for illegal immigration, continue to fall after the dramatic peak of May 2019. In April 16,789 incoming migrants were stopped and sent home by Border Patrol agents. That represents a decline of more than 50% from March.

A detailed picture of how American workers have fared vis-a-vis immigrants over the past year is published in Table A-7 of the monthly BLS Report:

The monthly job figures are preliminary, and always subject to revision. Never more so than this April. For one thing, the pandemic made it difficult for BLS personnel to conduct employment surveys. Call centers were closed, in person interviews suspended, and households and businesses less likely to respond to queries.

“Under these conditions there is not one number about the labor market that is going to tell you everything you want to know,” said Erica Groshen, a Cornell University economist who led the BLS during the Obama administration.

Nevertheless, a “V” shaped recovery remains quite possible. After all, the current meltdown is caused solely by the Federal government’s stay at home orders, which can—and hopefully will—be reversed as conditions warrant.

The big question: Will Federal policy once again deprive American workers of the fruits of recovery?

The excessive reliance on unemployment insurance as a stimulus in this pandemic makes this outcome more likely. The latest congressional package raises unemployment benefits by $600 a week. That is more than many laid off workers made while employed. The bill also raises the period laid off workers are eligible for benefits. Plus, it would waive eligibility requirements. Little things like the requirement that recipients actually look for work.

Domestic labor market rigidities have always boosted immigration, as employers seek the easy way out. The classic case: the influx of Hispanic immigrants to help rebuild New Orleans after Hurricane Katrina, despite the presence of an underemployed pool of American labor, largely black.

The Covid-19 pandemic has struck a heavy blow at many aspects of American life. But it has also stalled, and even reversed, the Election of a New People through immigration policy. This gain must be locked in, with an immigration moratorium.

Otherwise, any economic rebound could bring immigration roaring back.