Nikole Hannah-Jones [Tweet her] creator of the New York Times’1619 Project blood libel on the U.S. and currently in the news for rejecting the tenured position she bullied the University of North Carolina into offering her [Creator of 1619 Project rejects UNC position, joins Howard after tenure controversy, Axios, July 6, 2021] has a white mother. So, notoriously, did President Obama. Why do so many black Leftists have white mothers and black fathers?

Another example: Ijeoma Oluo [Tweet her]author of two “Critical Race Theory” texts: So You Want to Talk About Race and Mediocre: The Dangerous Legacy of White Male America.

In the first of these books, Oluo tells that: “I have never been able to escape the fact that I am a black woman in a white supremacist country.”

However, Oluo is not “black” at all. She is the product of a Nigerian father—who abandoned her, her brother and her mother when Oluo was an infant—and a white American mother.

This mother comes in for constant CRT criticism in Oluo’s book:

“Our mom never thought that our blackness would hold us back in life— she thought we could rule the world. But that optimism and starry-eyed love was, in fact, born from her whiteness” [White Men are Terrible, Insists Author Abandoned by Her Black Father, by Daniel Greenfield, Frontpage Mag, June 25, 2021].

So, what’s going on?

The most prosaic reason we find black people with white mothers being attracted towards CRT and extremist black activism is simply the dynamics of inter-racial marriages in the US. White women are more likely to marry black men than white men are to marry black women. According to the Pew Research Center, Black Husband-White Wife couplings made up 7% of interracial couples in the US in 2008, the most recent data analyzed. White Husband-Black Wife couples were just 3% of interracial couples. (Over half of interracial marriages were white-Hispanic or white-Asian) [Marrying Out: One-in-Seven New U.S. Marriages in Interracial or Interethnic, by Paul Taylor et al., Pew Research, June 4, 2010].

In other words, if you’re going to get a Black-White couple in the US, it is very likely to be a White mother and Black father. 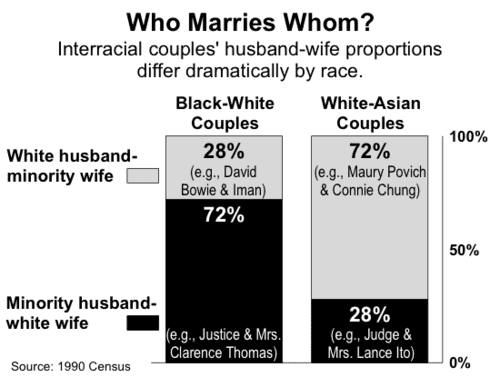 And this brings us on to why the products of these marriages might be attracted to political extremism, and especially to the kind that is based around the world being “unfair” on them. As I pointed out a while ago, mixed-race people will tend to be born to parents who have what is called a “fast Life History Strategy.”

A fast Life History Strategy develops when, due to an unstable environment, you adapt to “live fast and die young” so that you can pass on as many of your genes as you can as fast as you can.

A slow Life History Strategy develops when the ecology is harsh yet stable. As such, the group reaches the ecology’s so-called “carrying capacity” and there is strong competition to survive. You’re more likely to survive this the more strongly you are adapted to the environment. If you have lots of offspring who are not adapted, then they may all die.

So energy is transferred away from promiscuous sex and towards investing in a small number of partners and offspring, so that they have the best chance of survival. This leads to the emergence of cooperative groups. This, in turn, means that selfishness, poor impulse control and mental instability (especially negative feelings such as envy and anger) are selected out.

Slow Life History Strategists tend to be attracted to those who are genetically similar to them, because they invest in their (small number of) offspring and so can increase the extent to which they pass on their genes by breeding with partners who are genetically similar—the most successful unions being between the genetic equivalent of third cousins [An association between the kinship and fertility of human couples, by A. Helgeson et al., Science, 2008]. This also means they tend to bond more with their offspring, encouraging further investment.

But in an unstable ecology—where you live fast and die young—you will be attracted to the best-looking people, but beyond that, it pays to be attracted to genetic dissimilarity, because someone dissimilar may have some useful gene which will make the offspring more likely to survive.

This was noted in 2011 by psychologist Satoshi Kanazawa, to predictable outrage. His original blog-post was memory-holed by Psychology Today—here’s a PDF.  [Kanazawa Apologizes for "Black Unattractiveness" Article, Apparently Gets to Keep Job, by Mikhail Lyubansky, Psychology Today, September 16, 2011].

Unsurprisingly, mixed race marriages—and in particular Black Male-White Female marriages—have very high divorce rates, because they are composed of fast Life History Strategists who create weak social bonds [“But Will It Last?” Marital Instability Among Interracial and Same-Race Couples, by Jenifer L. Bratter and Rosalind B. King, Family Relations, 2008]. Oluo’s father, who abandoned the family, is a prime example of this. So was Obama’s. (Perhaps related, a notable proportion of the black-on-white killings chronicled monthly on VDARE.com by Kenn Gividen are black men killing their white partners—and, particularly, ex-partners).

Personality traits are at least 50% genetic [Personality, by Daniel Nettle, 2007]. This means that we would expect the children of marriages composed of a White mother and Black father to be above average in the personality trait “Neuroticism.” Indeed, there is direct evidence that mixed race people are higher in aspects of this trait [Is miscegenation bad for your kids? by Emil Kirkegaard, Clear Language, Clear Mind, April 1, 2017].

It can be argued that much of “Critical Race Theory” is based around envy and resentment, such as at the greater socioeconomic success of whites. Blacks, where they are involved, perceive themselves as marginalised and oppressed because they’re black (regardless of empirical evidence to the contrary), wallowing in negative feelings.

Unsurprisingly, many studies have found that extent of liberal identification correlates with being very high in Neuroticism [Mental Illness and the Left, by Emil Kirkegaard, 2020]. Such people would experience the world as a scary and unstable place. They would perceive themselves as persecuted outsiders and, if they were mixed-race, identify with the more “outsider” part of themselves.

At the same time, being Fast Life History Strategists and thus selfish, they might understand—in the current political environment—that it might help to identify in this way, even if it involved publicly denigrating the mother who had raised them.

And they would have conflicted feelings, such as Oluo (quoted by Frontpage’s Greenfield) as implying in her comment about her white grandfather, who never abandoned her:

My father returned to Nigeria when I was two and was more of a story than an actual person in my life. But my grandfather, my Bob Bob, loved me so completely that I never felt lacking.

This would result in “cognitive dissonance”—an unpleasant feeling that your world is contradictory.

And some people deal with that by suppressing their secret doubts about their world view and becoming all the more fanatical about, for example, Critical Race Theory.