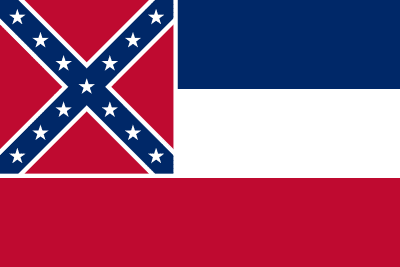 Mississippi and the Flag: Abolishing America (not contd!)...

To the disgruntlement of Mississippi's business leaders and political establishment, it looks as though the vast majority of the state's voters next week will reject a proposed new state flag that drops the Confederate Battle Flag design of the current one. Depending on which poll you cite, voters favor the current state banner to the proposed one by majorities of between 66 and 73 percent. It's almost enough to restore one's faith in democracy.

Democracy in fact is pretty much what the aforesaid business and political leaders in the "New South" are afraid of. In South Carolina last year, the Confederate Battle Flag that flew over the state's capitol was removed only after the state legislature voted on it, not after a state referendum. In Georgia, which also sported a Confederate design in its flag, the legislature adopted a new flag after proceedings that even The New York Times calls "secret." Only in Mississippi have the real people of a Southern state been asked what they thought about keeping the Confederate symbol, and the overwhelming majority are about to say, "Keep it."

The majority includes some 30 percent of the state's black voters, so the phony claim that the Confederate design is a symbol of racial hatred is exposed as a lie. The real reason for the war against the flag is not merely what the professional Afro-racists of the NAACP offer but the terror that their threats of boycott and economic strangulation inspire in the Economic Men who run the South today.

"I want to remove every obstacle I can when it comes to attracting good jobs to our state, and this is a way to do it," bubbles Mississippi Gov. Ronnie Musgrove, a Democrat, who in contrast to the state Republican Party, at least has the guts to take a position. As the flag issue jumped off the political front burner, state GOP Chairman Mike Retzer announced that the Stupid Party "will not fan the flames of division by commenting further on this issue and we have discouraged our leaders from making any statement that would unduly influence the electorate." No danger of leadership here.

But let no one be deceived that the Democrats' enthusiasm for dumping the old flag, which has flown since 1894, and the Republicans' cowardice about it are due to their positions on race. Both genuinely reflect the imperative of Economic Man to touch only what turns to gold, to recognize only those parts of reality that make money. A coalition calling itself the Mississippi Legacy Fund, formed by the state's businessmen, is mailing out a flyer that makes its materialist assumptions clear.

The flyer, as The New York Times describes it, shows a grandfather feeding a baby with a bottle and saying, "It's not right that our kids can't find good jobs close to home because companies won't locate in our state, but it's a fact. They have the wrong idea about Mississippi. A state flag that includes the Confederate flag just adds to those false opinions."

The flyer betrays a number of assumptions and fails to betray a number of others. For one thing, it doesn't even bother to engage the argument that the current flag is "racist" or "offensive." Indeed, it more or less concedes that the claim of "offensiveness" is false. But the flyer also concedes that nothing can or should be done to correct such falsehoods. The correction must come from those who are already correct—the current flag must go.

Like the Marxist Economic Men whom they emulate, the capitalists who got up this ad assume that history is irreversible, that even though "companies" have gotten "the wrong idea" about Mississippi, their error cannot be reversed. We can only accommodate ourselves to it. It is precisely because such a hidden conception of human history prevails in the capitalist mind that it has embraced virtually every other lurch toward socialism and the death of the West of the last hundred years.

It was Richard Weaver, a great Southern mind, who wrote that the Old South, the South of the Confederacy, was "the last non-materialist civilization in the Western World." That South, as someone else wrote a few years ago, is gone with the wind. But Weaver also wrote that the idea that the cliche that claims you can't turn back the clock was nonsense. If the clock is broken, you set it right.

This week the people of Mississippi will set one small clock right again by kicking the rear ends of the Economic Men who have come to predominate in what remains of the Old Southern civilization. If enough remains of that civilization in the rest of the South, the Mississippi vote could be the start of something much bigger than which flag flies over the state capitol.