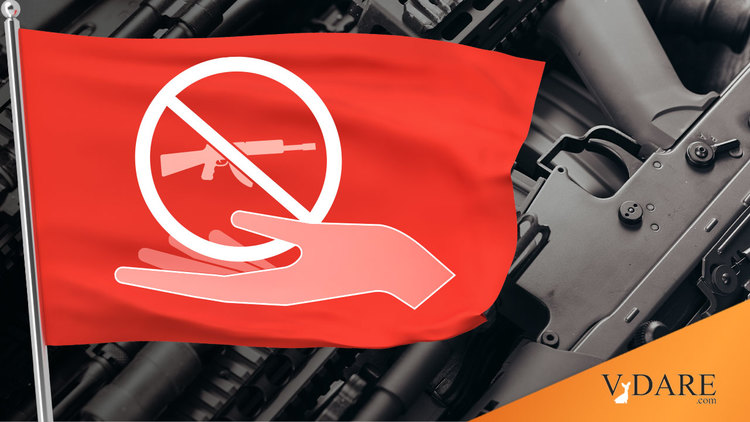 Here we go again. The Beltway Swamp's ineluctable impulse to (Pretend To) Do Something in the wake of a mass school shooting committed by a homicidal maniac has put America on the brink of greenlighting untold civil liberties abuses in the name of "safety." The grandstanding gun-grabbing reflex is a hard habit to break.

Shamefully, 10 zucchini noodle-spined Senate Republicans led by Texas GOP Sen. John Cornyn back a federal gun-control plan that would bribe states to adopt so-called "red-flag" (a.k.a. Extreme Risk Protection Order) laws. These psychological profiling weapons—now in effect in 19 states—empower disgruntled strangers, duplicitous family members, biased police and ideologically driven judges to disarm citizens by labeling them mental health threats to themselves and others. Anti-Second Amendment activists cite scientific research like a new University of California, Davis, study as evidence that red-flag laws are "saving lives." But the science is untrustworthy.

Effectiveness data are limited. "Part of the problem," two researchers noted in Wired magazine, "is these laws are so new there isn't much data available. Before 2018, only five states had implemented any form of red flag law, limiting our ability to test for significant effects on gun violence." Indeed, the associations between suicide/homicide reduction and red-flag policies are weak or nonexistent. The fine print is filled with caveats like this disclaimer from UC Davis' research team in 2019, which admitted: "It is impossible to know whether violence would have occurred had (orders) not been issued, and the authors make no claim of a causal relationship."

Because these mass shootings are so rare to begin with, candid researchers like one RAND team acknowledge that "their rarity makes it difficult to extract generalizable information to identify useful predictors of risk." Moreover, policies like red-flag laws that target individuals based on risk factors "would result in an extremely high rate of false positives; even the best available risk factors can identify only a subpopulation in which the risk of committing a mass shooting is on the order of one in a million."

What we do know is that real-world exploitation of existing red-flag laws has indeed created real-world nightmares for innocent Americans. Who will keep a database on these invisible civil-liberties casualties and mourn their victimization on the Senate floor? In my adopted home state of Colorado, which enacted the policy in 2020, it's guilty until proven innocent. Individuals accused of posing safety threats can be stripped of firearms for a year under a civil hearing process where the accused are barred from responding to allegations and the standard of proof is lowered. Second Amendment advocates have warned from the get-go that ax-grinders would wield the law to exact vengeance. They were dead-on.

In April, after perpetrating a five-year hoax nightmare, Fort Collins, Colorado, mother Susan Holmes was convicted of lying on a red-flag petition about a Colorado State University police officer who had been cleared in the suicide-by-cop death of her son in 2017. Holmes had falsely claimed to be a relative of the targeted officer. She is scheduled to be sentenced this month.

In Florida, overzealous sheriffs have wielded the Republican-supported red-flag law to crack down on children as young as 8 years old. Good luck clearing your falsely accused kid's name when his or her juvenile records—unprotected by Florida's red-flag law—get into the hands of sensationalist, pro–gun control media.

Military veterans know the pain and damage that can be inflicted by a "red-flag retaliation first, due process later" regime. I've reported previously on how the Department of Veterans Affairs has recklessly red-flagged "disruptive" military patients without due process, transparency or accountability in the name of "safety" based on arbitrary definitions of who and what constitutes a mental health menace.

If you dare vent "frustration about VA services and/or wait times" (which led to scores of deaths during the Obama years), threaten lawsuits or make "frequent unwarranted visits to the emergency department or telephone calls to facility staff," you can be branded, blacklisted and restricted by "Disruptive Behavior Committees" from accessing health care by the government that sent you off to war to defend everyone else's lives.

VA red-flaggers can "manufacture tone, the content of what you're saying, and will even ascribe actions to you that you did not perform," Army veteran David Scott Strain told me three years ago, when he warned of parallel risks with civilian red-flag laws. Disabled Air Force veteran and veterans advocate/attorney Benjamin Krause, who exposes the Soviet-style targeting of veterans flagged for exercising their First Amendment rights, calls the feds' star-chamber procedures "straight out of a totalitarian regime."

The potential for mass deprivation of civil liberties simply cannot be understated in the context of end-stage America's woke psychosis. If you stray from the politically correct position on VA incompetence, guns, masks, vaccines, transgenders in sports, Drag Queen Story Hour, election fraud, demographic transformation, Black Lives Matter or abortion, you and your children can be tagged, flagged and bagged for life. The inmates run the asylum—and Republican traitors are supplying the keys.

Michelle Malkin [Email her] is the author of Invasion: How America Still Welcomes Terrorists, Criminals, and Other Foreign Menaces to Our Shores. Click here for Peter Brimelow’s review. Click here for Michelle Malkin's website. Michelle Malkin is also the author of Unhinged: Exposing Liberals Gone Wild, Culture of Corruption: Obama and his Team of Tax Cheats, Crooks & Cronies, Who Built That: Awe-Inspiring Stories of American Tinkerpreneurs, and Sold Out: How High-Tech Billionaires & Bipartisan Beltway Crapweasels Are Screwing America's Best & Brightest Workers.