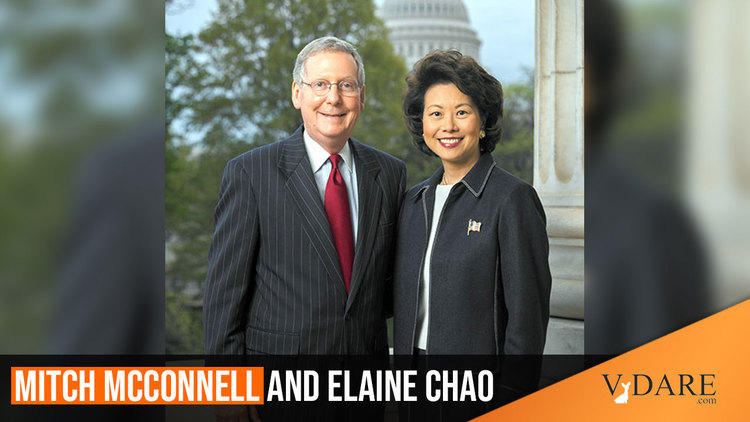 MICHELLE MALKIN: Lie Down With McChao And You'll Get Bit

Here’s the thing about Mitch McConnell and Elaine Chao. The granddaddy of Republican Beltway barnacles has inhabited the nation’s capital in one form or another since 1968, when he worked as a Senate legislative aide. His wife, the daughter of a Beijing-kowtowing shipping mogul, snagged her first job in 1983 as a White House fellow under the Reagan administration. For a half-century, this Swamp duo has done out in the great wide open what Swamp things do:

The whole of these two partisan animals is far greater than the sum of their grift-y parts. According to Forbes, McChao’s net worth now hovers around $30 million. Moldy-oldy McConnell’s Senate leadership position helped Chao land plum spots as George W. Bush’s Labor Secretary from 2001-2009 and Donald Trump’s Transportation Secretary from 2017-2021. She used her Trump appointment as her personal family fiefdom, according to the Department of Transportation inspector general, where she pimped her father’s biography while he helmed the Foremost Group. Chao demanded that her family members in top offices at the company participate in one of her official planned visits to China (later canceled amid public scrutiny). She also directed her staff to edit her daddy’s Wikipedia page; tried to pull strings with Homeland Security over a work permit application for a student supported by her family’s philanthropic foundation; and appeared to steer nearly $80 million in highway projects to Kentucky as hubby prepared to campaign for reelection.

McConnell and Chao have been scratching each other’s Swamp backs (and those of their ChiCom friends and family) for so long, there are scars on the scars.

Former President Donald Trump was right this weekend to deride McConnell as a ”broken down hack politician” and to call out Chao for her brazen attempts to ”get rich on China!” But the plain, unvarnished truth is that Trump himself empowered and enriched McChao by rewarding them time and again with endorsements and favors. During Trump’s tenure, the DOJ refused to pursue a criminal investigation against Chao for her multiple abuses of office. Meanwhile, the Transportation Department dragged its feet on my public records request from April 2020 seeking emails and other communications regarding a shady shipment of nearly 18 tons of medical supplies to the Chinese touted as a ”testament to the generosity of the American people.”

”Whoa, whoa, whoa,” I wrote at the time. ”Nearly 18 tons of critical medical supplies went to the Communist government whose country unleashed COVID-19 on the world, downplayed it, punished whistleblowers who warned about it and attacked critics worldwide as racist? Whose idea was this ’generosity’? Which ’American people’ approved this plan? Was the aid solicited or unsolicited?”

I asked about shipping because Chao’s family shipping behemoth, Foremost Group, is comprised of a mega-fleet built in China, subsidized with loans from the ChiComs’ Export-Import bank and dependent on China for nearly three-quarters of its freight business.

Reminder: Secretary Chao was designated an ”international consultant” of the Wuhan government in 2009. Her sister, Angela Chao, is CEO of Foremost and organized a humanitarian shipment of masks, gloves and gowns from New York to Wuhan in partnership with the ”Hubei Charity Foundation” in the midst of the pandemic panic.

In November 2020, the Transportation Department promised a response on a ”first-in/first-out basis” to my FOIA request for a copy of all emails sent to, from, or copied to Secretary Elaine Chao from October 1, 2019, to present day, containing the non-case-sensitive key-string Wuhan, Corona, COVID-19, virus, coronavirus, Hubei, Chinatown, pandemic or Foremost Group.

On January 7, 2021, Chao resigned from the White House in a virtue-signaling protest against the Capitol rally. She claimed to be ”deeply troubled...in a way I simply cannot set aside.”

McChao’s America Last treachery has deeply troubled me in a way I simply cannot set aside since 2001, when I first lambasted their campaign finance and lobbying dalliances with Chinagate operatives John Huang and Maria Hsia (who helped McConnell draft the EB-5 globalist grift program peddling green cards to wealthy Chinese investors) [Some questions about Elaine Chao , January 17, 2001].

The treacherous writing has been on the Swamp wall for decades. Methinks it’s a little late now to start balking at McChao’s hackery and greed. Like the snake in Trump’s favorite campaign parable told the old woman it bit after she nursed the reptile to health:

”You knew damn well I was a snake before you took me in.”

Michelle Malkin [Email her] is the author of Invasion: How America Still Welcomes Terrorists, Criminals, and Other Foreign Menaces to Our Shores. Click here for Peter Brimelow’s review. Click here for Michelle Malkin‘s website. Michelle Malkin is also the author of Unhinged: Exposing Liberals Gone Wild, Culture of Corruption: Obama and his Team of Tax Cheats, Crooks & Cronies, Who Built That: Awe-Inspiring Stories of American Tinkerpreneurs, and Sold Out: How High-Tech Billionaires & Bipartisan Beltway Crapweasels Are Screwing America‘s Best & Brightest Workers.

Malkin is author of the book, “Open Borders, Inc.: Who‘s Funding America‘s Destruction,“ available directly from VDARE.com in hardcover. To find out more about Michelle Malkin and read features by other Creators Syndicate writers and cartoonists, visit the Creators Syndicate website at www.creators.com. COPYRIGHT 2019 CREATORS.COM