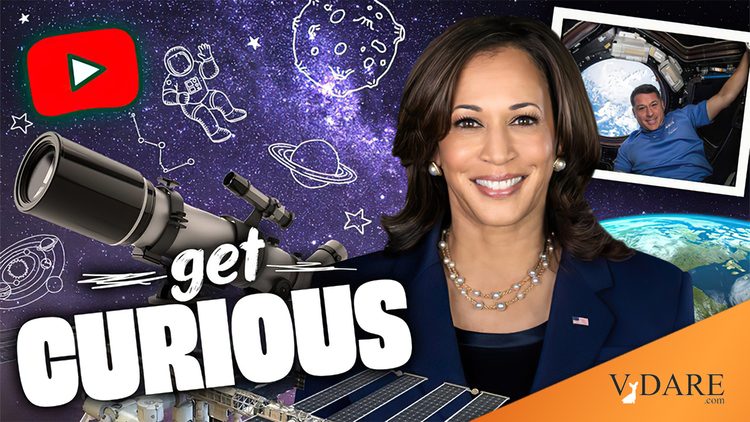 In case you hadn't heard, Vice President Kamala Harris' venture into government space propaganda for children was a galactic bust.

The veep's smarmy performance in a NASA agitprop video touting World Space Week was universally ridiculed and exposed this weekend after a local Monterey, California, TV station interviewed one of five child actors who auditioned for roles in the YouTube production. Canada-based Sinking Ship Entertainment (does it get any better than this?) cast and oversaw the scripted special for YouTube Originals, which the New York Post dubbed "bizarre." The Sun in the U.K. called it "cringe-worthy." It was phony-baloney on steroids (or maybe one too many mimosas, judging from Harris' tipsy delivery).

But there's so much more to the story.

What the "Get Curious With Vice President Harris" clip really shows is how deep the incestuous ties between the Biden-Harris (mis)administration and Google/YouTube run—and why every parent should be very wary about allowing their children to be exposed to GooTube's commie-style programming masquerading as educational entertainment.

Velz promoted the "Get Curious" video last week, tweeting that Harris invited "five kids from around the country to her residence at the Naval Observatory to learn about space and be inquisitive." He called it "super cute," but failed to mention that the young performers were not just naturally "inquisitive," but had all been auditioned beforehand to ensure they could ask Harris questions on cue.

For those who are, ahem, curious, Vrazilek served as former first lady Michelle Obama's media consultant on her "Becoming" book tour in 2018–2019. Prior to that, the YouTube Originals creative director and producer worked for the Obama White House for nearly six years as an intern, director of correspondence, associate director of digital engagement, and deputy press secretary to Mrs. Obama. When Biden-Harris took office in January, Vrazilek exulted on Twitter:

"Apparently when you don't work in DC people expect you to work on Inauguration Day? I had a bowl of ice cream and a cry before 8am—the chances of me doing anything but gushing over President Biden and Madam Vice President Harris are slim to none."

"Slim to none" are also the odds that parents can rely on YouTube to provide anything other than slanted brainwashing to their kids. Google/YouTube's parent company, Alphabet, forked over $21 million to Democrats in 2020. The revolving door between Google and White House Democrats is notorious. In April 2016, the Campaign for Accountability tracked 61 Google or Google-tied employees leaving the tech conglomerate to take federal government jobs and 171 Obama-Biden staffers jumping ship to work for Google.

Even more insidiously, you must remember that GooTube has repeatedly violated children's privacy:

Truly curious journalists in the Beltway might want to know more about how many more Lauren Vrazileks are planted at Google/YouTube and working intimately with Biden/Harris to pump out political programming for young online addicts whose data is being mined, monetized and weaponized by the manufactured-reality managers of Big Tech.