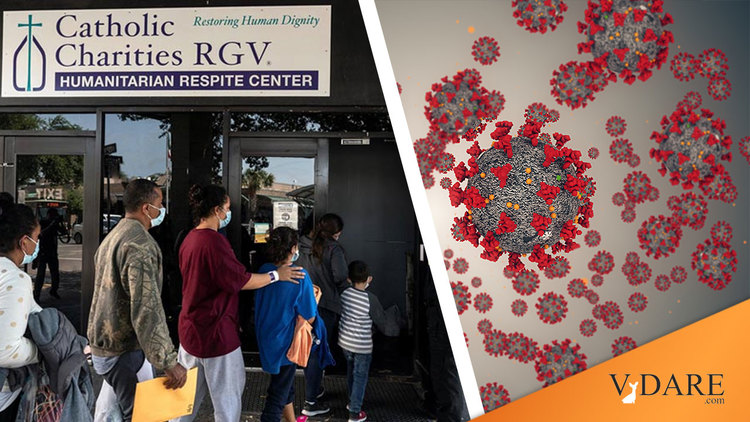 It seems there's no sanctuary from draconian mask and vaccine mandates. You can't get on a plane, go to school, work at a hospital, perform onstage, compete in sports, exercise at a gym, worship in church or walk outside without the long shadows of Big Pharma and the COVID-19 control freaks looming over every aspect of your lives. Every breath, every movement, every tweet, every Facebook post, every Instagram meme is being monitored for compliance.

There is one escape hatch, however. If you're an illegal alien, congratulations! Privileged border trespassers have been handed special "Get out of COVID Tyranny" cards, while the Biden administration is poised to send vaccine squads door to door to harass law-abiding citizens. Immigration rules don't apply to illegals, and neither do the invasive pandemic rules imposed on our citizenry.

Fox News reporter Bill Melugin reported on Tuesday that "after an incident at a Whataburger, police in La Joya, (Texas,) say they've learned illegal immigrants who test positive for COVID-19 are being released from federal custody to a local Catholic charity in the (Rio Grande Valley,) which then places them in local hotels without notice."

Border Report, a publication of Nexstar Media Group, also discovered that Catholic Charities of the Rio Grande Valley, or CCRGV, had placed illegal aliens at a local hotel that "reportedly did not contain them inside their rooms. The La Joya Police Department issued a public health warning citing reports that visibly sick migrants had been at a burger joint not wearing masks." Border Report spoke to CCRGV executive director Sister Norma Pimentel, [Tweet her]who told the outlet that the situation "has been corrected" and "a security guard was hired at the hotel to keep the migrants inside."

It is unknown how many COVID-19-positive illegals have been housed at hotels in Texas, but the federal government's outsourcing arrangement with Catholic Charities has been in place in the Rio Grande Valley since at least May 2014. I interviewed former U.S. Immigration and Customs Enforcement special agent Victor Avila in April about illegal alien-coddling activities at the CCRGV he observed, including routing untold numbers of border trespassers onto buses or planes without IDs (try doing that, my fellow Americans!). Avila also told me he saw envelopes being handed to the illegal aliens at the Catholic Charities facility, which he believed to be cash.

Catholic Charities certainly has money to burn. As I reported in my 2019 book, "Open Borders, Inc.," Catholic Charities aked in an annual revenue of nearly $4 billion in 2016, $1.2 billion of which came from government sources. Taxpayer funding is the largest single source of funding for Catholic Charities, comprising more than one-third of its total funding.

As I warned in my book, what every Catholic who believes in a sovereign America needs to understand is that the radicalized leaders of Catholic Charities are using your collection-plate contributions to implement Marxist-inspired liberation theology principles; think of it as faith-based socialism for a borderless planet. What every taxpayer needs to know is how much of this Catholic largesse for open borders has actually been subsidized by you.

By one Washington Times estimate, some 57 government agencies now contract with the Catholic Church. From the federal Corporation for National and Community Service in 2016, for example, Catholic Charities agencies scooped up $14 million. That year, the U.S. Department of Health and Human Services provided the largest infusion of tax dollars, followed by the U.S. Department of Housing and Urban Development, U.S. Department of Agriculture and other major agencies. The federal funding includes both direct government grants as well as "pass-through" money funneled through to Catholic agencies from federal grants to other state and local entities or nonprofit groups (including the U.S. Conference of Catholic Bishops).

Catholic Charities has also reaped unknown financial and in-kind contributions from governmental and intergovernmental agencies ranging from the European Union to the United Nations to the governments of Austria, Australia, Canada, Columbia, El Salvador, Germany, Honduras, Sweden, Switzerland, the U.K. and the World Bank.

It's bad enough the multibillion-dollar illegal alien racket run by Catholic Charities puts "welcoming the (border-jumping) stranger" above America's own homeless, jobless, veterans, Native Americans and poor. But for federally funded Catholic Charities and Biden officials to work together to undermine our borders and open our doors to hordes of maskless COVID-19-carrying trespassers flouting our laws—as we citizens suffer under unceasing pandemic oppression—is unholy treachery.