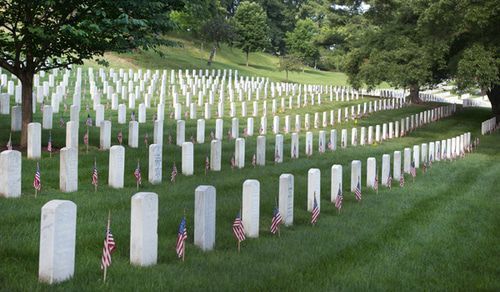 This year, columnist George Will marks Memorial Day (which he reminds us used to be called Decoration Day) by felicitating especially immigrant communities in the United States.  "Many ardent patriots," he asserts, "who have recently arrived here know, better than some people with many ancestors buried here, precisely why they are patriotic."

Americans are accustomed by now to hearing how immigrants are smarter, more motivated, more competent, better educated, harder working, more culturally enriched, and somehow more…human than the native-born.  Now Will claims they are more patriotic into the bargain. Do tell, George…

Well, you see, to begin with "in our nation, patriotism is creedal, not ancestral."  Before the Founding Fathers put their heads together, patriotism, whether in contemporary England or ancient Sparta, was "parochial: It was entirely about a particular people and their traditions.  Then came something new: America."

Really, is that so?  (Excuse me for yawning, but I seem to have heard the argument before.  Besides, I'd always understood there was nothing new under the sun.)  But please—go on with what you were saying, George.

In a nation founded on 'self-evident principles,' principles purportedly of universal validity, patriotism involved more than looking inward and backward. [Political philosopher Walter] Berns notes that in our creedal nation, the first nation not based on tradition, a word frequently heard in other nations' backward-looking patriotisms - 'fatherland' - has no place. Our Founding Fathers are revered primarily for their creed, which was their greatest deed.

I see, George.  (I thought that was what you were going to say. Apparently there are no new ideas under the sun.)   As Dr. Johnson observed, a man could write such stuff forever were he to abandon his mind to the task. The creedal-nation proposition-country notion not only fails to represent fact, it is not even theory but rather a mantra—by now an excessively feeble one.

For starters, "America" (notice Will does not say the United States) was a coherent, articulated, and distinctive society—ethnically, culturally, and politically—for nearly as long a period of time before the Declaration of Independence and the ratification of the Constitution as that which has elapsed since.

Will does quote John Jay who in Federalist No. 2 described Americans as "a people descended from the same ancestors, speaking the same language, professing the same religion"—only to insist that America was actually more diverse even then than Jay suggested, since we had three-quarters of a million black slaves and so many Germans that Congress considered bilingual legal printings in German and English.

But the slaves had no role or influence in creating American civilization. And the white population was sixty percent English origin, eighty percent British, only nine percent German—rapidly assimilating, since immigration from Germany had largely ended with the French and Indian War.

As for the founding documents, they did not develop out of thin air—much less Enlightenment France—but from two centuries of political and social experience informed by nearly a millennium of Anglo-Saxon-Norman history.  As Donald W. Livingston writes in the June number of Chronicles,

The Framers were, at times, given to rationalistic language, and Jefferson uses it in the Declaration.  But his main object is not the propounding of an abstract proposition but an affirmation of the corporate liberty of 13 states, each with its own particular moral and religious tradition.  Jefferson and his contemporaries well understood that the content of natural rights would have its source in those distinct traditions.

As for the proposition theory, Livingston invites us to compare it with the metric system:

To know the length of the standard meter, we must accept a story told by authority about the selection, by authorities, of a particular iridium bar encased in Paris. Not even in the rationalistic metric system can we escape the contingencies and particularities of tradition….To say…that America is an 'idea' rather than a culture, or that ours is a 'proposition country,' is like saying that the metric system is not like other systems of measurement (which have a traditionally determined standard of measurement), but instead is merely an idea or set of abstract principles.  It is always morally corrupting to think we are guided by what is, in fact, impossible.

So: Happy Memorial Day to you, too, George.  I understand you'll be up for another Pulitzer Prize next year.